A bumper harvest of hope for a much-needed economic revival

India Today Editor-in-Chief talks about why this year’s bumper harvest could be a lifeline in these bleak times, in the May 4, 2020 edition of the India Today Magazine.

It is hard to imagine a time like this in the recent history of the planet. The novel coronavirus pandemic has so far killed over 180,000 people and infected over 2.5 million people globally. It has triggered the largest industrial shutdown since the Second World War. Factories are shuttered, airlines grounded and borders sealed. Oil prices have crashed through the floorboards, particularly in the United States where producers are paying suppliers to take excess oil because they lack storage capacity. It is the ‘Great Lockdown’ recession, as the IMF calls it, where the advanced countries are likely to post a negative growth rate of around 6 per cent and India marginal growth or worse. We could be looking at the worst global recession since the Great Depression of the 1930s. Worse, around 265 million people in low- and middle-income countries, the World Food Programme (WFP) estimated this month, could face starvation by the end of 2020. To have this in the 21st century, with all the connectivity and technology at our command, would be a colossal human tragedy and a shame on the whole world.

India has so far lost only 686 persons to Covid-19, but even with a 40-day lockdown, we are struggling to control the virus. Testing is being ramped up to 367 tests per million, but it is still woefully inadequate, as our testing rate remains among the lowest in the world. We have a long way to go to know the full measure of the problem. The lockdown has given us the breathing space to prepare the medical infrastructure required to deal with the pandemic. On the other hand, it is costing the economy an estimated Rs 2 lakh crore a week and bringing abject misery to the poor. Two of the economy’s three large engines, services and manufacturing are shut. They comprise 70.6 per cent of GDP and employ 43.9 per cent of the workforce. Sadly, the disease is taking its heaviest toll on India’s economically important urban centres: 35 of these, largely state capitals, contribute 20 per cent to the country’s GDP. 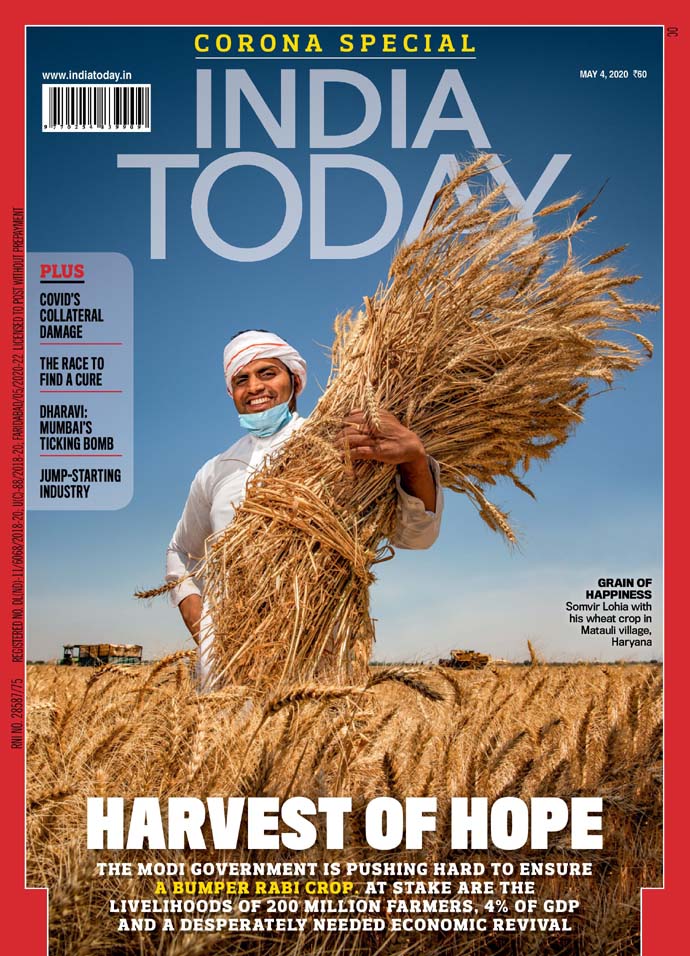 Fortunately, the third engine of our economy, agriculture, is beginning to tick. Farming employs over half of India’s total workforce, but at just 17 per cent, it is among the smallest sectoral contributors to GDP. It has been growing at a meagre 2.8 per cent per annum. Thanks to an extended winter and favourable rainfall, a record 106 million tonnes of wheat is to be harvested this year. The government’s godowns are overflowing with over 77 million tonnes of foodgrain, enough to last a year. India is the world’s second-largest producer of wheat, rice, sugarcane, groundnut, vegetables, fruits and cotton, and the largest producer of milk and pulses. It is the top exporter of basmati rice. This is the reason why India is not on the WFP’s list of countries in danger of starvation.

Hearteningly, this year’s crop will be at least 6 per cent larger than last year’s harvest. The bulk of this yield, wheat, gram, lentils and mustard, comes from the northern and western Indian states of Punjab, Haryana, Madhya Pradesh, Rajasthan, Gujarat, Uttar Pradesh and Bihar. In these bleak times, this year’s harvest is a bonanza because it will pump in an estimated Rs 8 lakh crore, or 4 per cent of GDP, into the economy. This will put money in people’s pockets, food on the table and, hopefully, resuscitate the moribund economy and revive demand in the system.

The government has realised this. On March 24, it released Rs 15,841 crore to service the first Rs 2,000 instalment of the Rs 6,000 annual payment under the PM-Kisan Samman Nidhi Yojana, targeted to benefit 120 million farmers. MGNREGA wages were increased from Rs 182 to Rs 202 per day. With a lot of such work being in agriculture, the scheme provides employment to 130 million people when running at full steam. On April 6, Prime Minister Narendra Modi held a high-level cabinet meeting to discuss means to help farmers grappling with the labour shortage. On April 20, the home ministry allowed the intra-district movement of labour and machinery to harvest the crop. Individual states like Punjab and Bihar, too, are going out of their way to rescue the harvest. Governments are strengthening their databases on farmers and produce in this crisis. The Bihar government is planning procurements at the panchayat level and doorstep delivery of kharif seeds. In Delhi, Prime Minister Modi mooted the idea of exploring innovative app-based solutions, like truck aggregators on the lines of Uber and Ola to connect trucks to nearby mandis.

Our cover story, ‘Harvest of Hope’, is cause for some cheer amidst the prevailing gloom. Written by Consulting Editor Ajit Kumar Jha, Senior Editor Anilesh S Mahajan and our bureaus across the country, it tracks the story behind this year’s bumper harvest and why it could be a lifeline in these bleak times.

Four years ago, the Modi government unveiled its plan to double farm incomes by 2022-23. This move was driven in part by the realisation that farming had become an unsustainable profession, indebted farmers were committing suicide by the thousands and millions of rural folk were streaming towards cities in search of livelihoods. Today, as the government steps in with innovative ways to rescue the harvest, it is possibly giving the sector more attention than it has since it came to power. This crisis in certain areas has spurred welcome change. There is now a greater emphasis on mechanisation of agricultural activity and digitisation of marketing through the e-NAM platform. If the government follows through these initiatives post-corona, it will enormously improve the productivity of Indian agriculture, which is notorious for its inefficiency. Meanwhile, let us celebrate in our isolation the beginning of a revival in the economy. Stay safe and be Upbeat.

(India Today Editor-in-Chief's note for the cover story, Harvest of Hope, for May 4, 2020)

Also read: Exit Strategy: How to make it work

Post your comment
#India today magazine, #Indian Economy, #Agriculture, #Economicimpactofcovid19
The views and opinions expressed in this article are those of the authors and do not necessarily reflect the official policy or position of DailyO.in or the India Today Group. The writers are solely responsible for any claims arising out of the contents of this article.