The future world will likely be more interdependent and willing to trade-off economic prosperity in favour of human life.

When it was announced that Prime Minister Narendra Modi will address the nation at 10 am on April 14, everyone knew, by and large, what was coming. Before that, over the weekend the snatches of the Prime Minister’s video conference with Chief Ministers trickled out. It was reported that a number of states wanted the lockdown to be extended at least by two weeks. Confirming speculation, a few of them – notably Maharashtra, Punjab and West Bengal – went ahead to declare continuation of the lockdown till the end of the month.

So, when PM Modi spoke on Tuesday morning, the only element of surprise was the cut-off date, which was set as May 3, instead of April 30 as expected by all.

Critics thought PM Modi’s speech was short on specifics and high on exhortations. But, the first principle of messaging is it must be tailored for the audience. As always, Narendra Modi speaks to the common man. The more discerning can always get their share of data and details from official sources. So, from a communication perspective, it was a master-class in leader-speak. The Prime Minister started by thanking citizens for their cooperation, sacrifices and hardship borne during the 21-day lockdown. Next, he shared the outcome of the measures and credited the people for success. He went on to establish credibility of the claim by comparisons with records of other countries. This gave people a 'reason to believe' in the merits of the strategy and thus getting a 'buy-in' from them for the lockdown extension. He softened the news of extension till May 3 — with the possibility of relaxation after April 20, but with conditions attached. Finally, he co-opted the public in the fight against Covid-19 with a 7-point Citizen’s Charter.

The first 21 days of the lockdown were meant to arrest the community spread of the virus while creating a window for capacity building in terms of testing kits, PPEs, quarantine facilities and dedicated Covid-19 hospitals. The cost of economic disruption could be more than justified in terms of the lives saved. However, the challenges of the extended lockdown are more complex and multi-dimensional.

Lockdown 2.0, as it is being called, is essentially borrowed time given as 'loan' to the Prime Minister by the people of India against a personal IOU, as it were. Therefore, these 19 days have to be used very efficiently for rapid progress on various fronts – medical and economic. Without visible results, the government will not be able to contain the fallout of economic distress, commercial disruption and normal life of citizens paralysed across the country. 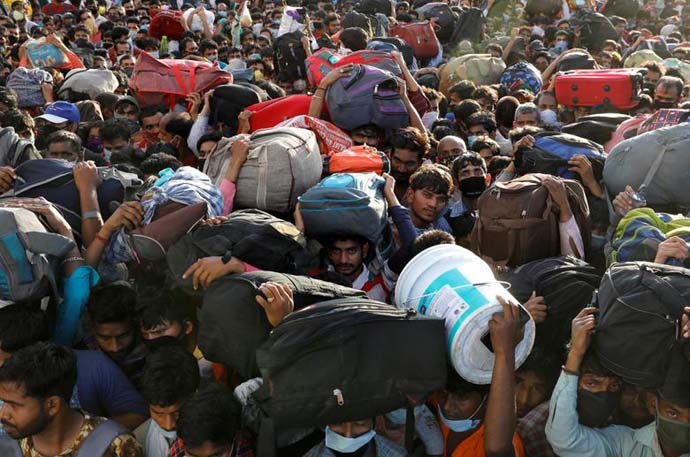 In the absence of gainful occupation in the urban areas, there would be a pressure of reverse migration to the rural hinterland. (Photo: Reuters)

The task of the state on the economic, commercial and civic front is no less daunting than management of the public health emergency. 130 crore people cannot be kept in suspended animation indefinitely. The resultant pandemonium can be far more devastating than the pandemic.

From all accounts, having done the first round of banking and fiscal interventions (with more to follow in stages) the Centre is keen to kickstart the economy. This can happen only if the states are aligned to play in tandem. However, not all states appear to be ready and on the same page with the Centre. Their rationale possibly is the varying stages of Covid-control across the country. Therefore, the states that still have some way to go in the Round-1 fight against Covid-19 are understandably less confident of relaxing restrictions immediately. This does pose a problem because of the interdependent and connected character of our domestic economy. A critical component for commercial activity is the availability of labour. In the absence of gainful occupation in the urban areas, there would be a pressure of reverse migration to the rural hinterland. If prevented, it can lead to unrest like one has seen in Delhi, Surat and, recently, in Mumbai.

This can cut both ways. Apart from the dangers of carrying the virus, starting a wave of community spread, if labourers return to villages, they may not want to come back soon. The uncertainties of finding employment and the risk of infection in cities may make them more reluctant. Further, if benefits of government dole like MNREGA, PM Garib Kalyan Yojana, subsidised ration, etc kick in, there will be more incentive to stay put. RBI Governor's announcement makes it obvious that banks have not loosened their pursestrings to any meaningful extent yet. (Photo: PTI)

The Delhi government is acutely aware of the likelihood of such a scenario. Hence, they are trying to accelerate the lockdown exit process while nudging the industry to re-commence operations. But that is not going to be an easy task. With the trade channels virtually shut, other income and employment-generating activities stalled, and a large section of the white-collar workforce on furlough, the demand in most sectors is at an all-time low.

Though the Reserve Bank has taken some decisive steps to ease the financial situation for the MSMEs, the money crunch for large businesses is no less serious with a near-total breakdown in the working capital cycle. High leveraged companies will struggle to meet repayment obligations to banks. Today’s announcements by the RBI Governor on reverse repo rate reduction make it obvious that banks have not loosened their purse strings to any meaningful extent yet.

Under the circumstances, the only salvation lies in government spending. Infrastructure spending will have to go on an overdrive. But, only the central government projects will not be able to carry the day. The states will have to get into the act. But, most state coffers are empty. Now, with GST collections down to a trickle, it is doubtful if they would have the money to pay salaries and meet regular expenses. All of them will want a central bail-out.

Finally, the ball will go back to Narendra Modi’s court. This is undoubtedly the toughest challenge — not just in his political career but, arguably, in the history of independent India. So far, Modi has shown tremendous grit. People have reposed their full faith in his leadership and have high expectations from him to steer the country out of this colossal crisis.

At the same time, the Prime Minister needs our support. We must all realise the post-Covid world will be very different from anything we have seen before. Though no one can predict how the future will unfold, many leading thinkers feel it will be a more interdependent and compassionate one, which is willing to trade off economic prosperity in favour of human life and a more sustainable all. People and organisations will be known and judged by posterity on how they behaved at the time of Covid-19.

This will require a very different mindset. The lockdown is a good time for us to reflect and prepare for a brand-new tomorrow.

Also read | Covid-19: How the 21-day lockdown can be a turning point for India

#Narendra Modi, #Economic impact of coronavirus, #Covid-19, #Lockdown2.0
The views and opinions expressed in this article are those of the authors and do not necessarily reflect the official policy or position of DailyO.in or the India Today Group. The writers are solely responsible for any claims arising out of the contents of this article.