Good evening. There's hardly been anything good about any evening for quite some time now, but we will cut to the chase. Thursday morning began badly. 4.12 lakh new Covid cases have now been added to the India list. 3,980 people died in the past 24 hours. Point to be noted: these are all recorded figures and deaths. We have no way to ascertain the number of deaths going unreported.

So, while you stay safe at home and try and keep the virus at bay, remember to not prescribe yourself medicines. Be very wary of those Covid forwards. They do more harm than good. There is also speculation on when the third wave of the pandemic might hit India. While India struggles to contain the second wave, we cannot let the guard slip. The third wave might be upon us this winter. You can read more on that story here. If you've been able to get the jab, great. If you haven't yet, register yourself at least. You will get the vaccine (eventually).

Among the people India lost to Covid on Thursday was also RLD Chief and former Union minister Ajit Singh. Singh was 82 years old. He had tested positive for the virus on April 20 and passed away in a Gurugram hospital this morning. Singh served as a union minister four times. While we're talking about Ajit Singh, we will take you back to the time Ajit Singh was expelled from the Janata Dal. This was December 26, 1992, and Singh had been a rebel for a while. He was first served with a show-cause notice in December 1992. Then, 10 days after the notice, he was expelled from the party. But that is not what took Singh by surprise that December.

It was Biju Patnaik not supporting Ajit Singh that left Singh shocked. Ajit Singh was Biju Patnaik's protégé. While Patnaik tried intervening and kept the Janata Dal leadership from taking any action against Ajit Singh till December 26 that year, Patnaik finally went along with the party. VP Singh, under whose leadership Janata Dal came into being, later told India Today Magazine, "The fight is not between individuals. He [Ajit Singh] fought the party by splitting it in Uttar Pradesh; he will have to go now."

Singh later founded the Rashtriya Lok Dal, whose Chief he remained till his death.

Now moving to the Election Commission. You know the Commission took offence to the Madras High Court saying the EC 'should be booked for murder' for letting polls and poll campaigning go on as usual in a pandemic year. So the EC went to Supreme Court with a plea to restrict the media from reporting oral remarks of judges. The SC has set the plea aside, saying reporting court proceedings was 'integral to freedom of speech'. 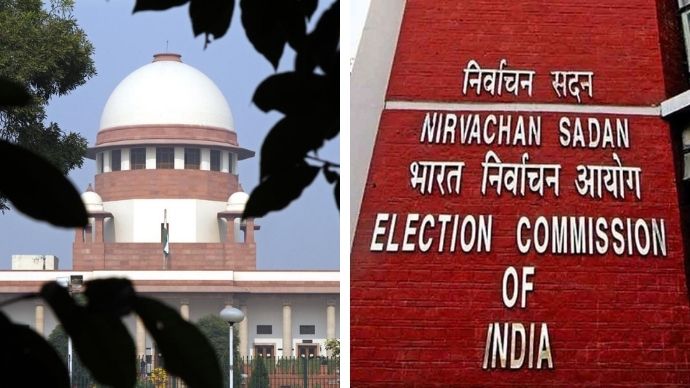 SC has set aside the EC’s plea to restrict the media from reporting oral remarks of judges. (Photo: Reuters)

Since we are talking about the 'murder' remark by Madras High Court, let's go back to what the word murder means. Our Word Of The Day descends from the Proto-Indo-European (PIE) '*mr-trom' which meant "killing". It was a noun derived from Proto-Indo-European '*mer-', which meant "to die". The word murder today means killing somebody deliberately, according to Oxford dictionaries.

From murder to the Badland Bengal, where post-poll violence has now reached an all-new high. Today, Union minister and BJP MP V Muraleedharan's convoy was attacked in West Midnapore. Muraleedharan has blamed Trinamool Congress goons for the attack. In Cooch Behar's Dinhata town, former MLA and Trinamool leader Udayan Guha was attacked and left with a fractured hand. The TMC has blamed BJP goons for the attack. While the kadi ninda continues on Twitter, we move on to a hatke story you need to read today.

Twenty kilograms of roshogolla landed in trouble with the Uttar Pradesh police, far from Bengal, on Thursday. Hapur Police seized the roshogollas from two people who were celebrating the UP Panchayat poll results by distributing the sweets. So what's wrong in it, you might ask? Well, the timing. There's Covid out there to mar all celebrations and cops have been doing their best to rein in covidiotic behaviour. We know the two roshogolla-distributors were arrested, but we cannot tell you what happened to all that roshogolla. If you have one at home, go ahead and eat it. Remember to eat it alone though. Don't give the virus more reasons to celebrate.

Since celebrations are banned and IPL has been postponed, we suggest picking up Jhumpa Lahiri's Interpreter of Maladies. It is a light read. It is impactful too. And the best part, it will keep you engrossed for a couple of hours if you need a break from all the Covid-related news.

We will leave you with that for today. Stay safe. Stay home if you can afford to stay home.