DailyOh! Cyclone Amphan is here, but why we can’t forget Cyclone Bhola

This is not a thing on which we want to be proven right, but the spikes are breaking spike records. This morning, India recorded its highest single-day spike in the 24 hours preceding the morning, with 5,600 cases. With well over 1,07,000 cases, India is now emerging on the global stage as a coronavirus hotspot. That’s not a stage we want to emerge on, but what we want no longer decides what we get. Not in the times of the coronavirus at least. Rising cases is bad news but there is some good news too in the air. Civil Aviation Minister Hardeep Singh Puri has said in a tweet that domestic civil aviation operations will recommence in a calibrated manner from Monday, May 25. How do you say things in tweet? Well, you don't. In a tweet, you write. But who cares about that technicality when the news is as big as this:

Domestic civil aviation operations will recommence in a calibrated manner from Monday 25th May 2020.All airports & air carriers are being informed to be ready for operations from 25th May.SOPs for passenger movement are also being separately issued by @MoCA_GoI.

We welcome the move. Though it is sure we won't find people to welcome us at airports in the near future because the SOPs are going to be strict. That's okay. In the times of the coronavirus, you learn to live with what you get. In the worst case scenario, what you can get is the infection. Being prepared for it is part of learning to live with the virus. Boosting immunity is part of being prepared. There are a lot of things that you can do to boost immunity like having green tea, eating fruits and more vegetables. With meat supply hit, you might say you are already being forced to take more veggies. We get that. But there is nothing as effective in the boost-immunity project as yoga. Within yoga, it is Chakrasana that could well be your sure-shot immunity booster. So spread out the mat and bend it like Gabriella Demetriades because bending like Ramdev is not a goal for beginners.

A post shared by Gabriella Demetriades (@gabriellademetriades) on May 18, 2020 at 8:44pm PDT

Even to bend it like Gabriella, don’t try too hard because you won’t get there in a day. It’s a step-by-step process. Do it only under expert guidance. Your expert for now could well be YouTube videos. But let us tell you why and how Chakrasana helps fight Covid-19. They also call Chakrasana the wheel pose, but we feel it’s more like a flat tyre pose. Your body is not completely a wheel, you see, there is a flat surface between the hands and the feet as you do the undoable.

As you curl yourself in this pose, your arms, legs, spine are all stretched and exercised, but it also opens up the chest and strengthens the lungs. Covid-19 you know takes a heavy toll on lungs. The flat tyre is instrumental in allowing increased amounts of oxygen into the rib cage. This helps improve respiration. Studies have shown that the flat tyre pose induces therapeutic effects in practitioners with asthma and other lung diseases. Asthma patients are at a greater risk of getting severely ill because of Covid-19. If you can get up in the morning and start work on building immunity - perfect. If you can’t, then do it whatever time of the day suits you. Learning to live with the virus will involve learning a lot of things we never cared to learn. Becoming a flat tyre is just one of them.

But get out of the flat tyre pose because we want to tell you about the coiled snake pose. No, it isn’t a yoga pose, it is the Cyclone Amphan pose. We told you yesterday, this pose is why cyclones are called cyclones.

Today, Amphan made landfall uprooting trees and blowing away rooftops of makeshift houses along the Bay of Bengal coastline. One reason the loss of human lives was low is that the government swung into action in time and evacuated the areas that were likely to be hit hard. In 1970, this couldn’t be done.

That cyclone was called Bhola but there was nothing bhola about it. It was the deadliest cyclone ever as at least 5,00,000 people lost their lives in the storm. This is more than the global loss of lives of coronavirus so far. And we do not know how far we gotta go with it, but for now, that figure stands at 3,24,970.

Millions of people are evacuating as Tropical Cyclone #Amphan approaches eastern #India and #Bangladesh. This image shows the storm at 16:15 Universal Time (9:45 p.m. India Standard Time) on May 19. https://t.co/MB8hZwx12M pic.twitter.com/8kwHT2OxUT

So Bhola made a not-so-bhola landfall on the coastlines of Bangladesh, then East Pakistan, and India’s West Bengal. Trouble for the Pakistan government started after the cyclone had passed.

Accused of not doing enough, the Pakistani government, led by junta leader General Yahya Khan, lost to Awami League in the elections held shortly afterwards. Shortly afterwards, the Bangladesh Liberation War started. Cyclone Bhola may not have been the decisive factor, but it sure was a catalyst in the ultimate overthrowing of the Pakistan government from its eastern territory.

Bhola and corona caught us unprepared, though not unaware. We knew cyclones and viruses exist. Also, that they kill. But Bengaluru today was hit by something that it (still) doesn’t know. All Bangalorians know is that there was a ‘boom’ around 1.30 this afternoon in the city’s Whitefield.

Some say it was a sonic boom. Immediately some asked what is a sonic boom? For them: a sonic boom is the sound that is generated due to shock waves created whenever an object travels through the air faster than the speed of sound. Maybe it is sound’s way of calling out for someone moving ahead. There are those who are saying this was an alien attack. But we hope it is nothing more than a sonic boom but we are already under attack by coronavirus.

From Bengaluru let’s return to Delhi. The capital city has over 10,000 positive cases now. Quite strangely, the number of containment zones in Delhi has fallen from 97 to 66 even as the cases have been spiking. With Delhi health secretary Padmini Singla having taken note of the mismatch, it is possible the containment zones rise again. Whether that happens or not, Delhi’s Feroz Shah Kotla Stadium, now called Arun Jaitley Stadium, has been turned into a quarantine facility.

This is the same stadium where Sunil Gavaskar scored his 29th century in 1983-84 that equaled Don Bradman's long standing record for the highest number of hundreds in Test cricket. All promises may or may not be meant to be broken, but all records for sure are. Gavaskar’s record was blasted by Master Blaster Sachin Tendulkar. In fact, it was in the same Feroz Shah Kotla Stadium that Sachin Tendulkar broke Gavaskar’s record of most centuries with his 35th test century in 2005-06.

A stadium turning into a quarantine facility sounds like sad news because stadiums are where records are meant to be set and broken. When matches and sporting events are not on, that’s the place where athletes and sportspersons practise to set and break records. In Relaxations 3.0, stadiums have been opened for practice. Not all though, but most certainly.

Ever wondered why a stadium is called a stadium? We will answer that because stadium is our Word Of The Day. Stadium comes from the Greek word ‘stadion’, a measure of length equalling the length of 600 human feet. As feet are of variable length, the exact length of a stadion depends on the exact length adopted for 1 foot at a given place and time.

For a long time, the only event at the ancient Greek Olympic festival was the race that comprised one length of the stadion in Olympia. That’s where the word ‘stadium’ originated.

While some are waiting for stadiums to open up to burn calories and get in shape, some are having samosa to put on calories and get out of shape. Shape and calories you can get to choose for your body. But if your samosa fetish can spark a Covid-19 spread, then you sure need disciplining because now is not the time to let loose idiots. Our Covidiots Of The Day come from India’s coronavirus hotspot - Mumbai. 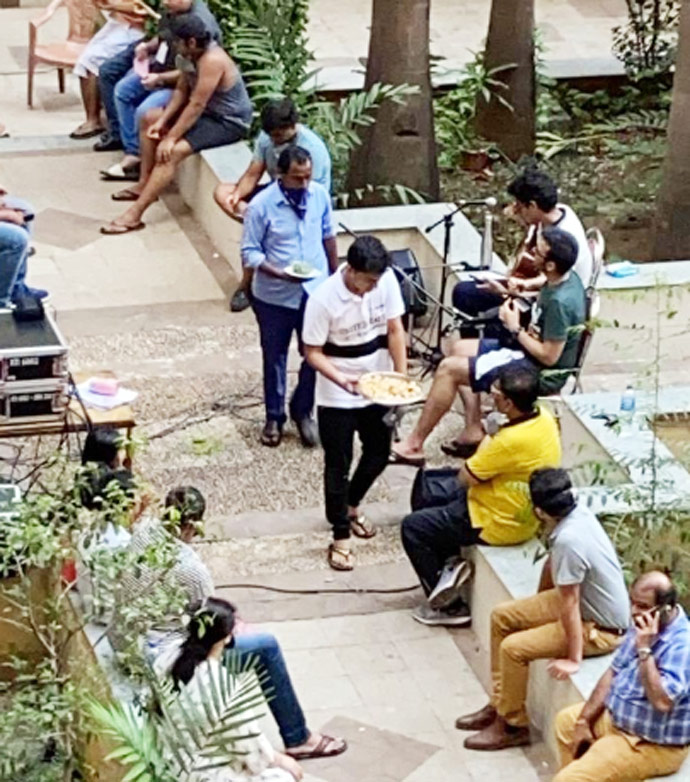 The residents of a residential society in Mumbai’s Ghatkopar organised a musical samosa party. Why samosa, we do not know. We also do not know why people did not care to put the mask on as they went partying. Two people have been arrested for being the brains behind the party. It’s another matter that anybody who organises such a party, with precautions thrown to Wuhan, has no brains to begin with. If they had any, they would have known jail has no samosas on the menu. The hospitals neither.

We hope the message from Ghatkopar reaches everywhere and everyone planning to have a party of any kind. If you really want to have a party, go the virtual way. Singapore went that way to pronounce the death penalty to a man accused of running a drug racket. The country has zero tolerance policy for drug trade.

As for us, we support a zero tolerance policy towards samosa parties and all parties that happen without masks.

So don’t forget the mask.

Also read: DailyOh! Venus is bowing out of the night sky, to what cyclone really means

#Cricket, #Covidiot, #Cyclone bhola, #Cycloneamphan
The views and opinions expressed in this article are those of the authors and do not necessarily reflect the official policy or position of DailyO.in or the India Today Group. The writers are solely responsible for any claims arising out of the contents of this article.