As WHO website describes, Nipah virus (NiV) causes severe disease in both animals and humans.

The death of Linni Puthussery, a nurse from Kerala who was treating patients infected with the deadly Nipah virus, has shocked the country, with god's own country witnessing a heart-rending tale of sacrifice.

"Saji Chetta, I think I am almost on my way; I don't think I'll be able to meet you. Please look after our children. Take them with you to the Gulf; don't be all alone like our father, please."

These were the last words of 31-year-old Lini, who died Monday morning. The mother of two could not meet her little children, one a two-year-old and the other five, owing to fears of infection. In an attempt to contain the spread of the virus which has already claimed at least 10 lives in Kerala, her body was urgently cremated — her husband couldn't even see her face one last time.

The sudden outbreak of the virus, which, according to the World Health Organisation, is a newly emerging zoonosis, raises questions over whether the state and central healthcare authorities are well equipped to contain it.

CM condoled over the demise of Lini, the nurse who died of infection while taking care of Nipah virus affected patients. It is saddening to know that she lost her life while serving others. Her selfless service will be remembered. pic.twitter.com/RaE973xRJ2

In a shared show of unity, people on social media are paying respects to Linni and remembering her as a "martyr".

Nurse Lini died in our battle against the Nipah virus. She died trying to save patients infected by it. She was just 31 & was a mother of two little kids. If she is not a martyr, I don't know who is. pic.twitter.com/xF2rZrtuRv

The incident has also brought to the fore some other humanitarian acts of doctors, who are otherwise at the receiving end of the wrath of either patients or governments.

Several doctors, including UP's Kafeel Khan, whose remarkable efforts during the Gorakhpur tragedy made news, have expressed their wish to serve during this calamity in Kerala.

Disturbed wth mortality due to Nipah Virus.I request Kerala Cheif minister Mr Pinarayi Vijayan to allow me to serve at Calicut Medical college to save innocent lives.Sister Lini is a inspiration and I am more than willing to sacrifice my life for the noble cause.@vijayanpinarayi

Many professionals have expressed their interest to work in Nipah affected areas. The Government of Kerala welcomes their service. Those who are interested to volunteer must contact the director of Health Dept. or the Superintendent of the Government Medical College, Kozhikode.

Here's what we know about the deadly Nipah virus so far:

One Kozhikode house identified as epicentre

According to reports, two brothers of a family, both in their twenties, died on May 5 after they were brought to the Kozhikode Medical College Hospital upon showing symptoms of Nipah. Their father is also in a serious condition. Officials inspected their house and sealed a well inside after dead bats, the probable source of the virus, were found in it.

All the victims of the virus, so far, contracted it from other affected members of the family. The nurse who was treating the patients also died.

What is Nipah virus?

As the WHO website describes, Nipah virus (NiV) causes severe disease in both animals and humans. The natural hosts of the virus are fruit bats of the Ptereopodidae Family, Pteropus genus. It was first identified in Malaysia in 1998, and named after the village where the first case was reported. It may or may not have intermediate hosts. In 1998, pigs were the intermediate hosts. But later, in subsequent outbreaks, there were no hosts.

In 2004, Bangladesh witnessed a massive outbreak in which a total of 196 cases of Nipah encephalitis were reported from 20 districts. Out of them, 150 people died. Consumption of raw date palm sap was identified as the major cause.

This also features at the "top of the list" of 10 priority diseases that the WHO has identified as potential next major outbreaks. 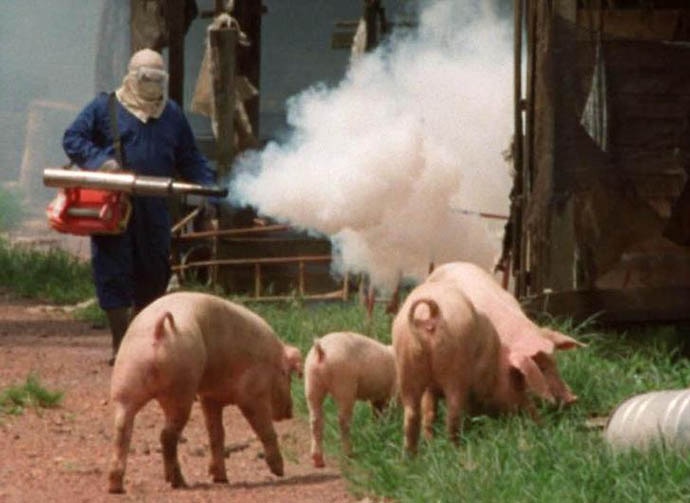 File photo of health ministry worker fogging an area around a pig farm in Malyasia during 1998 outbreak (Photo: Reuters)

No, not the first time in India

This is not the first outbreak of Nipah in India. Reports claim two previous occurrences, both in West Bengal. Around 71 cases with 50 deaths (70 per cent of the cases) were reported in two outbreaks. During January and February 2001, an outbreak of febrile illness with neurological symptoms was observed in Siliguri. A second outbreak was reported in 2007 from Nadia.

Is urbanisation a reason?

Well, there are many research papers on this issue. According to a research paper titled "Nipah Virus: Effects of Urbanisation and Climate Change", co-authored by Shweta Rana and Sanjana Singh, human intervention in bat-infested areas, which is due to rapid urbanisation, is a reason. Nipah Virus has existed in the bats for centuries, but it is only now that the infection is spreading.

“In Malaysia, the virus spread due to unplanned deforestation of pulp wood, which is the natural habitat for NiV-carrying bats, and mismanagement of larger piggeries,” the research paper says.

'Nipah outbreak caught us all by surprise'

In an Outlook report, Dr Roshan Radhakrishnan, a Kannur-based anaesthesiologist said that the outbreak has caught the medical fraternity by surprise.“There is no denying it. There was no forewarning; nothing to suggest that something as obscure and rare as Nipah virus (NiV) encephalitis was going to hit India in 2018,” he wrote.

Current situation in Calicut Medical College due to the #Nipah virus.@VidyaKrishnan pic.twitter.com/jaMXO8uK9B

There is no vaccination for Nipah, whose symptoms include breathing trouble, brain swelling, fever, headache, drowsiness, disorientation and delirium.