Chhapaak was the perfect Right Wing wet dream. Then Deepika went to JNU

Padukone committed the cardinal sin of stepping into an 'anti-national' university.

What's in a name? Well, nothing to Shakespeare. But throw that question at Desi Twitter, and you have '#NameItLikeBollywood' to '#BoycottChhapaak'. The fire erupted late on social media. Deepika Padukone was the perfect apolitical superstar, who has just featured on Prime Minister Narendra Modi's Twitter timeline, where he said she perfectly put forth his message in a Diwali video on Nari Shakti. She was Bharat Ki Laxmi. Deepika Padukone was the Right Wing's darling. Then Tuesday happened. 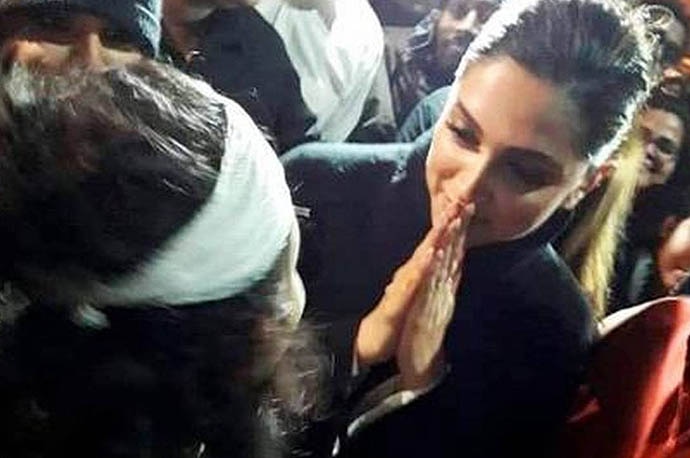 Padukone committed the cardinal sin of stepping into an 'anti-national' university. She stood next to a few 'anti-national' people who were raising 'anti-national' slogans when she reached there. Soon after photos of Deepika with JNUSU president Aishe Ghosh made it online, social media went into an overdrive defending and demonising her. What more, there was Right Wing's Villain No. 1 Kanhaiya Kumar too in one of the photos.

BJP's Tajinder Pal Singh Bagga was among the first influential people to call for a boycott of Chhapaak. On Wednesday, it got worse. Swarajya magazine published an article claiming that the name of Laxmi Agarwal's acid attacker in Chhapaak has been changed from 'Nadeem Khan' to 'Rajesh'. You could TRY arguing that it is a fictional representation of the facts of Laxmi's life, but anyone who has faced a troll-attack knows that it is like teaching semantics to a cow. Oops. Strike that. Replace it with any other animal (leave out the dolphins. They might be a little more intelligent than our Twitter trolls).

But anyway. Swarajya tweeted that article saying that 'Nadeem Khan' was replaced by 'Rajesh' in Chhapaak, and boom. Account after 'proud Hindu' account tweeted their versions of this attack on Hinduism that Deepika Padukone is at the centre of. She was abused no end and it all stemmed from pure anger: how dare she choose a side that is 'anti-national', and by extension, 'anti-Modi'?

The facts were something else. Chhapaak has Bashir Khan as Malti Agarwal's attacker. The 30-year-old Bashir Khan 'urf' Babboo keeps a constant watch on Malti, stalks her, slaps her boyfriend — yes, the same, poor Rajesh! — and makes Chhapaak a Right Wing wet dream. This is just the narrative all those 'love jihad'-type posters peddle. They first seduce you, then they force you to marry them, then when you reject them, they attack you. With acid, in this current case. No points for guessing who this 'they' are. Chhapaak even has a burqa-clad woman as part of this acid attacker's family. Could the Right Wing have WANTED anything more? But then, calamity struck.

They had to paint Deepika black almost overnight — there was no time to waste. Chhapaak was releasing in just two days! So someone went to IMDB, where there is the mention of a 'Rajesh'. A 'Sharma' was added to his name pronto (what else, Sharma ji ka betas have been ruining our lives since RD Sharma days). Infographics were created, split neatly down the middle with Saffron on the Left and Green on the Right (ah, the irony), as facts gasped and died a lonely death on fact-check websites.

The reviews are out now. There have been two screenings of Chhapaak in Delhi alone, with probably none of this troll brigade in attendance. Deepika Padukone is receiving appreciation for her work in Chhapaak. The ones calling for boycott of Deepika, meanwhile, are yet to throw their Oppo phones and stop using Axis bank. Not even going into what all they need to discard because of Ranveer Singh.

Post your comment
#Jnu violence, #JNU, #Chhapaak, #Deepikapadukone
The views and opinions expressed in this article are those of the authors and do not necessarily reflect the official policy or position of DailyO.in or the India Today Group. The writers are solely responsible for any claims arising out of the contents of this article.