DailyOh! How Amaravati gave us, then Britain, Kohinoor to why depression is Word Of The Day

You can let the bygones be bygones, but how do you live with the knowledge that a 105-carat diamond is forever gone?

So, sit back and read, and if you are reading on the move, let us move to telling you, what we can hold back no longer.

Let’s begin where we left you yesterday. Yesterday, we told you about Andhra Pradesh government’s decision to have three capitals — Amaravati, Visakhapatnam and Kurnool. Missed it? Worry not, here's your recap.

So, today protests broke out in Amaravati over the government’s decision. Telugu Desam Party (TDP) leaders, who led the agitation, said that the government’s move is a breach of trust of the people of Amaravati because only Amaravati has the right to be the capital. You can read the full list of TDP’s complaints here.

Now, whether Amaravati is the only deserving region or not, we can’t give you our two paisa. But do you know that Amaravati is the place where the Kohinoor came from? Yes, that same Kohinoor that sent Hrithik Roshan off on that infamous mission in Bang Bang. That same Kohinoor that the British took with them when they left India. That invaluable priceless diamond was first found in Amaravati. The world famous diamond came from Kollur mines in Kollur village, which is now part of Amaravati. 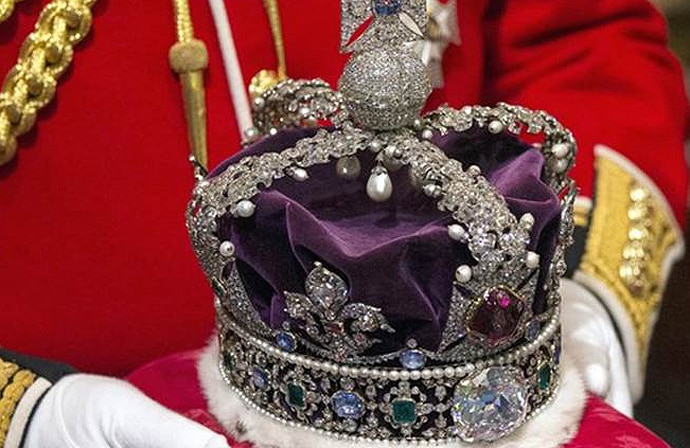 The British took that invaluable piece of diamond with them, but it was first found in Amaravati. (Photo: Reuters)

The diamond had been set in the crown of the current Queen Elizabeth's late mother. Right now, it is on display in the Tower of London.

The Kohinoor is one of the world’s largest diamonds. So, why didn’t India ask the British to return it? Of course, India did. But in 2013, former British Prime Minister David Cameron said that the diamond would never be returned. Cameron said, "I certainly don't believe in 'returnism', as it were. I don't think that's sensible."

Sensible, yeah! If they start to believe in ‘returnism’, they would have to return so much.

In India, you can let the bygones be bygones, but how do you live with the knowledge that a 105-carat diamond is forever gone?

It’s not like the British took from only us. We mean, they took away a lot of things, but they did leave us with a couple of (good) things like the railways, telephone connections and stuff like that. Now, it’s not like we wouldn’t have come to know about these things if the British hadn’t come, but yes, when they came, they did create a certain infrastructure. Luckily, they couldn’t take that back with them. If they could, they sure would have!

British architects Sir Herbert Baker and Sir Edwin Lutyens designed it in 1912-1913. You might already know this. Most of us have studied about it in our history books. The Lutyens here is, however, the same Lutyens after whom the ‘Lutyens’ gang’ term is coined. No, there is no such gang-gang. It’s just used for those who follow the liberal ideology. Since Lutyens’ Delhi is believed to be the elite part of Delhi, where the high and mighty hang out, the term Lutyens’ gang was used pejoratively for them.

But did you know that the circular structure of Sansad Bhavan is modelled on an 11th century temple called Chausath Yogini Temple, which still stands in the Morena district of Madhya Pradesh?

You can visit the place if you plan to travel to Morena. Do that only if you like visiting places of historical or religious significance. If you are the hills-and-seas type of traveller, go to hills and seas. Just see how the two structures compare here:

From Sansad Bhavan and Chausath Yogini Temple let us take you to Davos in the Swiss Alps. Yes, we are taking about the World Economic Forum happening in this town in Switzerland. And we are taking you there because Deepika Padukone was there. No, she was not there to support any 'anti-nationals'. Not even to participate in any business or economic discussion, but something that concerns us all.

Okay, economy also concerns us all, but Padukone was there to receive the Crystal Award for her contribution in the field of mental health. She has been working for the cause through her foundation, Live Love Laugh, ever since she spoke up about her battle with depression. It's been just about five years to that day when Deepika left us all teary-eyed when she tore up on her fight with depression.

The problem is massive. Depression thus is our Word Of The Day. The word first merged in Old French as the "angular distance of a star below the horizon". Its Latin origin is from 'deprimere' which means "to press down, depress". By 1650s, it came to acquire the literal sense as the "act of pressing down, state of being pressed down".

Depression, so, is the feeling of being low or down and out. As Deepika, said, if you feel like she did or like 89,308,308‬ people do in the country, know that you are not alone. Talk about it without fear or shame. Feeling heavy?

We are going to talk about food now, but are in way suggesting that you consider finding comfort in food.

Check that out if you want to. If you feel hungry while doing so, well, you know what to do.