DailyOh! Delhi locked again as cases spike, to why a couple refused to wear masks

As cases surge, CM Arvind Kejriwal has announced Delhi will remain locked from 10 pm on April 19 to 5 am on April 26.

India's Covid tally is rising and former Prime Minister Manmohan Singh's name got added to the tally today. After his report came positive, Dr Singh was admitted to AIIMS Trauma Centre for treatment.

"I honestly believe that history will be kinder to me than the contemporary media, or for that matter, the Opposition parties in Parliament," Manmohan Singh had said at a press conference during his second term as Prime Minister. 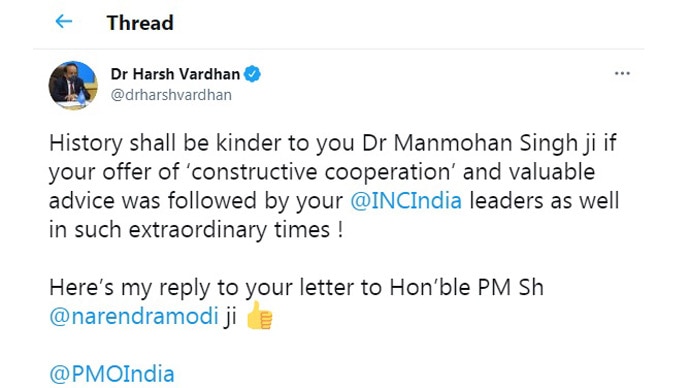 Ex-PM Manmohan Singh’s letter gave five ways to incumbent PM Narendra Modi to fight Corona. Harsha Vardhan’s letter to Manmohan Singh told him to go give the same advice to his party members - to not get tempted by absolute numbers but to go by percentage of the population.

The population, on its part, knows both letters have been written by the two gentlemen at the behest of other gentlemen.

All gentlemen in the Covid fight are currently fighting other gentlemen more than fighting the virus, which the people are being forced to fight without hospital beds, oxygen cylinders and testing facilities. To ramp up facilities, Delhi Chief Minister Arvind Kejriwal has announced a lockdown in the capital from 10 pm today to 5 am on April 26. Before that could happen, Delhi’s drinkers queued up outside liquor shops to ensure they do not have a dry week-long lockdown. The scene from a graveyard in Delhi. (Photo: Reuters)

The Uttar Pradesh government has resfued to put the state under locks despite the Allahabad High Court asking the government to impose lockdown in Lucknow, Prayagraj, Varanasi, Kanpur, Gorakhpur till April 26. The UP government, which has imposed a lockdown on Sundays for now, refused saying lockdowns hit the poor the hardest.

So even if UP was under locks yesterday, much like Delhi, it won't go the Delhi way over this week.

Heard of the couple that went out driving without masks yesterday in Delhi? The duo ventured out because “they had to hand over a phone to a friend”. They were in their car but without masks. The police stopped the two because you can’t be without a mask even in your car. The woman in the car then got out of the car and asserted her right to be without a mask both inside and out because she had cleared IAS Mains and “what if she has to kiss her husband”? The police then arrested the husband, who tried to lend her support, even though she clearly needed none.

#WATCH | A couple misbehaved with Delhi Police personnel in Daryaganj area earlier today after they were stopped & asked the reason for not wearing face masks. "An FIR under various sections of IPC has been lodged against them," say police. (Video source - Delhi Police) pic.twitter.com/hv1rMln3CU

And then came the twist in the story. The man today said he knew wearing the mask was the right thing to do but he was under compulsion to not wear it. Who compelled him? The wife. He said the couple had been fighting in the car with each other before they began fighting with the police because he wasn’t being allowed to wear a mask. While the husband was arrested yesterday, the wife was arrested today after questioning.

The couple is now reportedly convinced the mask needs to be worn. 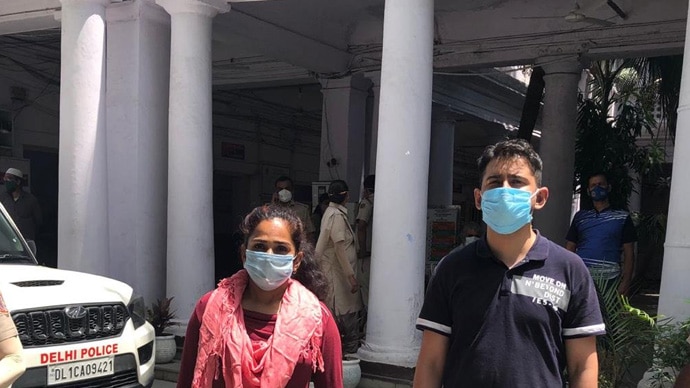 The couple arrested by police for not wearing a mask. (Photo: ANI)

Mamata Banerjee and Narendra Modi too are convinced they should cut down on their public rallies. So Mamata will not campaign in Kolkata anymore, but hold a ‘symbolic’ meeting on the last day of the campaigning, which is on April 26. All her rallies in all other districts would not be longer than 30 minutes. Voting will be held for the last phase on April 29. The Election Commission, if you missed the news, has banned campaigning 72 hours before voting, from the earlier 48-hour silence period.

PM Narendra Modi, on his part, will wrap up his campaign on April 24. Earlier, the Prime Minister was to visit Bengal on April 21 and April 24 to address two rallies on each day. Now, he will hold all four rallies - in Malda, Murshidabad, Sewli and South Kolkata - on one day, which happens to be Saturday, April 24. All other BJP leaders will, however, stick to their original campaign schedules. Coronavirus, meanwhile, has intensified its campaign and is winning hands down with over 2.75 lakh cases reported between Sunday and Monday morning. Many in India are livid over elections being held in the middle of a pandemic but did you know that the US held mid-term elections amid the Spanish Flu outbreak in 1918? Should we do what they do? No. But maybe we can just know what they did. The US mid-term election too was held during the second wave of the pandemic, which was similarly more dangerous.

Candidates were barred from holding rallies or other public speaking events. They went in for newspaper coverage or sending campaign material through mails. Now, as is the case with India, you see the spread is not uniform. Some states are more impacted than the others. In the US, candidates in more affected areas faced sharper restrictions. Of course, they cried bias.From the US, let’s take you to France. Why? Because the word campaign finds its roots there. Campaign, the Word Of The Day, comes from French word champagne, which means open country or field. French are supposed to have borrowed the word from the Italian campagna.

While the word initially meant open country or field, it soon became a military term. A 1656 dictionary defined it as a “word much used amoung Souldiers, by whom the next Campaine is usually taken for the next Summers Expedition of an Army, or its taking the field.”

In English, the word was used to denote a tract of open country. Who gave the word its political overtone? The Brits apparently. The British appear to have been the first ones to think of specific political endeavours as campaigns. On February 2, 1739, R Freeman wrote in The Daily Gazetteer, “It cannot seem strange, after premising these Observations, that I offer a few Remarks on the Methods made use of for opening the present political Campaign.”

Oxford dictionary defines campaign as “a series of planned activities that are intended to achieve a particular social, commercial or political aim”. Parties planned the campaign but no party planned how to cancel the public campaign. In 2020, Corona taught us a lesson on why there is no point planning. In 2021, it is giving us a revision of its lesson.

UK PM Boris Johnson has changed his plan to visit India this April end and apparently PM Narendra Modi wanted the plan cancelled because his plans too have changed. Instead of meeting foreign dignitaries, Modi apparently will be meeting senior officials involved in the fight against Covid in India.

To bolster the fight, Ministry of Finance has approved a credit of Rs 30,00,00,00,000 to Serum Institute of India and Rs 15,00,00,00,000 to Bharat Biotech to pump up vaccine production. The approval for payment has come with a promise of actual payment to follow shortly.

Till everyone gets the vaccine shot and till Covid numbers keep surging, stay in. Keep company of books and good movies while you are in. Our recommendation for the day is Man-Eaters of Kumaon by Jim Corbett (it also happens to be his death anniversary). Let the book introduce you to 10 chilling stories of man-eaters and their prey.

#Narendra Modi, #Manmohan Singh, #Covid vaccine, #Delhilockdown
The views and opinions expressed in this article are those of the authors and do not necessarily reflect the official policy or position of DailyO.in or the India Today Group. The writers are solely responsible for any claims arising out of the contents of this article.