DailyOh! Did Trump mean Modi was in Big Mood, not bad; to Naveen Patnaik doing a Modi act

Just a day after Twitter ran a fact check on US President Donald Trump’s tweet about mail-in ballots, India ran another one on him. What was the need for India to do it? Because Trump claimed to know ‘something’ about Prime Narendra Modi’s mood, which no one else claimed to know about. The coronavirus pandemic has spoilt our mood too, but Trump said Modi’s mood was bad because of what China was doing in the border areas.

Trump said, “I did speak to PM Modi, he is not in a good mood about what’s going on with China.”

#WATCH "We have a big conflict going on between India & China, 2 countries with 1.4 billion people & very powerful militaries. India is not happy & probably China is not happy, I did speak to PM Modi, he is not in a good mood about what's going on with China": US President Trump pic.twitter.com/1Juu3J2IQK

Modi is India’s ‘Pradhan Sevak’, also the country’s ‘Pradhan Chowkidar’, so an incursion on the border area is sure to spoil his mood, but shouldn’t he be telling us in India first about his mood instead of talking to Trump? He also has a monthly platform for it – Mann Ki Baat. That's what a logical course of things would look like. And quite in keeping with that, it turns out, Modi talked to Trump last on April 4, much before China decided to spit dragon fire along the border. And even then, Modi did not have a Mood Ki Baat. The baat-cheet was about hydroxychloroquine.

Modi has not issued an official denial of any mood talks with Trump, but his officials have denied it. So, why did Trump claim it happened when it never really happened? We do not know. If you know, then do let us know. POTUS runs a world of his own, apart from running the US. In that world, he has offered to mediate between India and China in view of the souring relations between the two countries. We wonder if he has chosen a mediator to take care of the US' deteriorating relations with China. Officials say Narendra Modi did not have any recent discussion with Donald Trump on Chinese aggression. (Photo: Twitter)

"…These THUGS are dishonouring the memory of George Floyd, and I won’t let that happen. Just spoke to Governor Tim Walz and told him that the military is with him all the way. Any difficulty and we will assume control but, when the looting starts, the shooting starts. Thank you!"

....These THUGS are dishonoring the memory of George Floyd, and I won’t let that happen. Just spoke to Governor Tim Walz and told him that the Military is with him all the way. Any difficulty and we will assume control but, when the looting starts, the shooting starts. Thank you!

Trump is not the only head of state whose tweet has been deleted. Earlier, Brazilian President Jair Bolsonaro found two of his tweets deleted from the platform in violation of a new company policy on misinformation involving Covid-19. One showed him defying the rules of isolation, and in the other, Bolsonaro defended the controversial use of an unproven drug to treat Covid-19. But we were talking about Trump, who can say one thing one day, and quite the opposite the other, well, because tomorrow is another day. But was he trying to say Modi is in a Big Mood and bad was just a slip of tongue? What is Big Mood then? We can answer that, but first let’s talk about what mood is because, guided by our mood, we have made mood the Word Of The Day. The word’s origin can be traced to German ‘mod’, which means “frame of mind, disposition”. That mostly applied in a positive sense. You can say mod was always a good mod. The same is not true for mood; mood can be bad and low too.

The word also finds its roots in Latin ‘modus’, meaning measure, manner and the French mode, meaning manner. It’s from these routes that the word entered the English language. The Oxford dictionary simplifies it for current usage, defining mood as “the way you are feeling at a particular time”.

But then Twitter complicated associating a Big to mood. Big Mood entered Twitter lexicon in about 2017. There it meant “that's how I feel right now”. It’s more like ditto or “I feel you”. Which brings us back to Trump. Was he trying to say Modi is in Big Mood on Chinese incursions? We are clueless on that. Just as we are clueless about how you can know about the mood of someone you haven’t met or spoken to in months.

Now, guess who is clueless about the coronavirus? Tejashwi Prasad Yadav, the former deputy chief minister of Bihar. So unfazed is Yadav about the spread of the virus that he decided to visit Gopalganj, which has been on the boil for the past couple of days. It’s not just the heat wave that has kept Gopalganj simmering, but also three murders.

If you haven’t followed this story, let us give you a quick rundown on it. A JD(U) MLA Pappu Pandey, also known as Amrendra Kumar Pandey, is accused in the murder of three people, an incident which left CPI-ML leader JP Yadav injured. JP Yadav and Pandey have been at loggerheads for long. But coming up shortly are Bihar elections. So, politics is important. If you thought politics in a post-Covid-19 world would be different, Tejashwi just served you a reality-check on that. The RJD leader tried to enter Gopalganj, where he and his supporters were stopped.

Tejashwi was in his car, which is easy to stop without risking corona. But his supporters and police clashed, allowing the virus full opportunity to claim new bodies. Tejashwi may or may not find enough voters, but corona could have found enough human bodies to make merry.

Tejashwi Yadav stopped on his way to #Gopalganj by #Bihar police#ITVideo pic.twitter.com/d34iwOTGir

Son of Lalu Prasad Yadav, Tejashwi, who facilitated this violation of social distancing norms, is our Covidiot Of The Day. His defence, “There is no house arrest order against me. Lockdown is only for MLAs while criminals are allowed to move freely.” You may or may not be under house arrest, but the coronavirus is under no arrest. It is free to move and infect.

Criminals did not seek permission to move. Criminals do not follow law. When lawmakers too feel like breaking the law, what should we call them?

Losing hope that Modi may not assign another task, Odisha Chief Minister Naveen Patnaik has taken matters into his own hands. He has sought the hand of fellow Odia and Union Minister Dharmendra Pradhan.

The task is to sing 'Bande Utkal Janani', a patriotic Odia song, on May 30. We support the choice of date only slightly because the date falls on the right day – Saturday, which is not the perfect day. The perfect day would be Sunday. You see, not everyone has a five-day week. For those who have the time and inclination, the time to perform the task is 5.30 pm.

If you are not Odia, you may not know the significance of 'Bande Utkal Janani'. The song was a poem penned by Kantakabi Laxmikanta Mohapatra. When Odisha became a state on April 1, 1936, this poem was made the state song of Odisha. 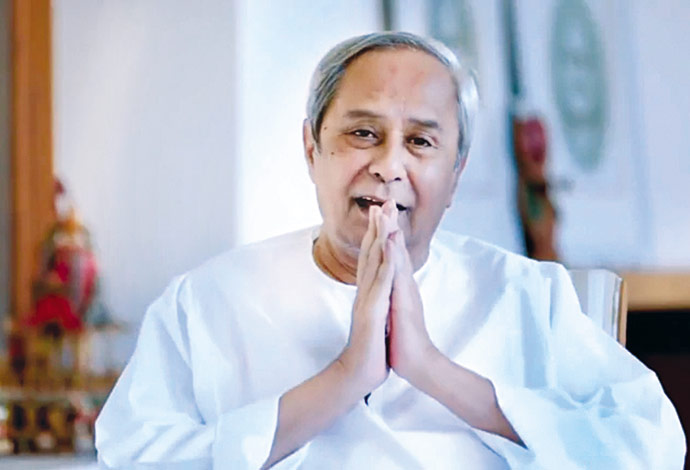 Naveen Patnaik has a task for the people of Odisha, to be performed tomorrow at 5.30 pm. (Photo: PTI)

The poem envisages an Utkala who maintains her self-respect and dignity from a position of confidence and strength, rather than insecurity and fear. Much before Orissa became Odisha, Orissa was Utkal. Dravida Utkala Banga, to go back to Jana Gana Mana.

Patnaik’s idea is that the song be sung by all together to boost the morale of Covid-19 warriors.

We will keep an eye on how the task is performed and ear to all the good singing.

Also read: DailyOh! SpaceX launch put off, but how Kennedy Space Center got its name

#Tejashwi Yadav, #Jair bolsonaro, #Twitter, #Donaldtrump
The views and opinions expressed in this article are those of the authors and do not necessarily reflect the official policy or position of DailyO.in or the India Today Group. The writers are solely responsible for any claims arising out of the contents of this article.