The rise in such posts has co-incided with the rise of militant Hindutva.

A Facebook page, Hindutva Varta, published a list of 102 names – of Hindu women who had “fallen victim to love jihad”, giving links to the women’s Facebook profiles, and urging “Hindu lions” to “go hunt” the Muslim men.

After uproar on social media, the page was taken down on Sunday night. Later, Alt News published a report idenitfying the admin of the page as one Satish Mylavarapu.

Hindutva Varta is by no means the only web portal fanning and spreading communal hatred with incendiary statements, fudged facts and liberal appeals to “pride” and “honour”. But what it did was go a step ahead and call for action. A screenshot of the post. The page was later taken down. Photo: Alt News

That the admin(s) of the page thought they could get away with putting up a list on a public platform and openly call for lynching has many worrisome pointers – the legitimacy that the absurd, manufactured notion of love jihad has gained, the sanction violence as a means to settle imagined historic wrongs has got, and of course, the dangers of irresponsible social media usage.

'Love jihad' is a myth

That love jihad is ridiculous should not need saying. The fact that we must reiterate this makes it dangerous. To imagine that adults choosing life partners, marrying them — that, too, often after battling parental and societal pressure — and living with them could be part of an organised international conspiracy makes no sense.

Despite various police investigations proving that claims of the phenomenon are baseless, it has been given legitimacy by politicians and even courts.

'Love jihad' is an ugly and insidious belief – it finds easy targets in the Indian family’s deep fears of daughters choosing “love marriage”, among those who are unwilling to accept that women have chosen Muslim men over Hindu eligibles. It turns love into something dirty – a conspiracy, a ploy to convert and enslave.

The narrative has been built slowly and surely, from Kerala in 2009 to Uttar Pradesh ahead in 2017, and feeds the paranoia that Muslims, through producing more children and through conversions, will soon outnumber Hindus, and under the patronage of some political parties, proceed to enslave the majority community.

Involving women and their sexuality makes appeals to the pride of Hindu manhood that much more potent – if you are a Hindu, indeed, if you are a man, do your bit to protect the honour of your religion and your community.

So which political party is benefiting from this?

If you are on Facebook, Twitter, WhatsApp, you have received messages that seek to point out historical wrongs meted out to Hindus and deviously hidden from you by “historians busy promoting an anti-Hindu narrative”.

You have recently been shown “proof” Gandhi was promoting Muslims at the cost of Hindus, Nehru was a womaniser who conspired against all Hindu hridaysmarat netas, and been made aware of Muslims routinely “burning the Tricolour and chanting pro-Pakistan slogans” through fake news.

You have also realised that an increase in the frequency of such messages has coincided with the rise and rise of the Bharatiya Janata Party.

It has been documented previously how the party used social media to lethal effect to win elections, through a careful combination of polarisation – using fake news and videos as and when need arose – displaying its unwavering commitment to the Hindutva cause, and with development promises as the icing on top.

As the development narrative unravels with no new jobs created, demonetisation and GST hitting the economy and fuel prices rising, the tone of the posts is changing – 'if you are a true patriot, you a true Hindu, you a true Indian, vote for the BJP in 2019'.

The party probably sees this as fair strategy to maximise votes. But in the ruthless pursuit of electoral victories, the BJP needs to remember that vitiating the atmosphere of the country can be fatal – as apparent in the recent Kasganj clashes and the many lynchings we have seen in the past year.

The social media user needs to be responsible

It is true that Facebook, Twitter and other social media giants need to do more to curb the irresponsible use of their platforms. The administration, too, needs to track down the individuals or group admins sharing posts that openly call for violence, and book them under appropriate legal provisions. 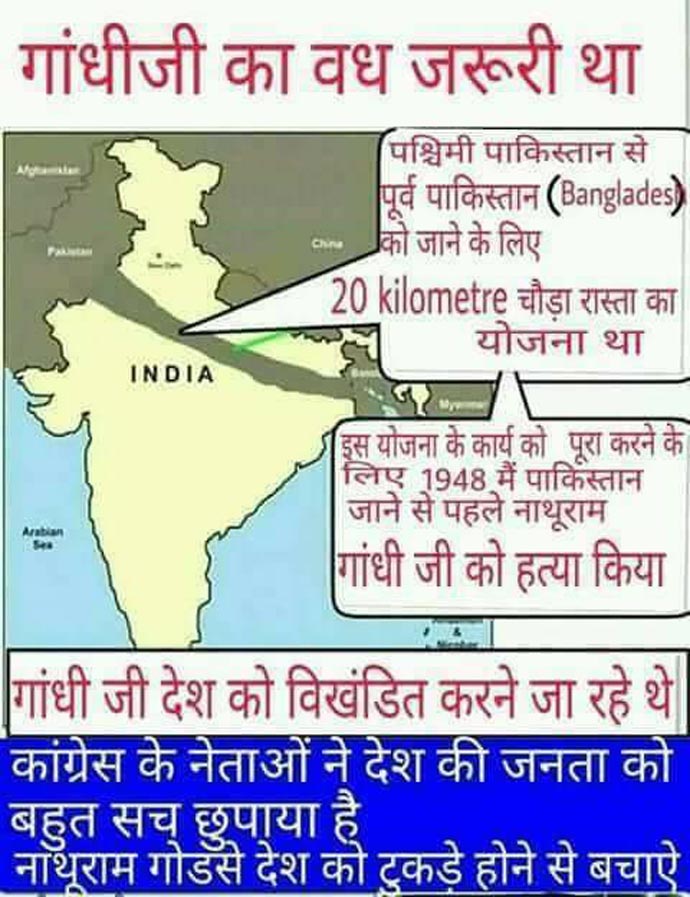 This nugget of knowledge is from a pro-BJP page with more than 2 lakh members. Photo: Facebook

However, social media users cannot conveniently brush off their own responsibility. Pages like Hindutva Varta are created because there is an audience for them. The most cursory check on Facebook will reveal pages claiming allegiance to various religions promoting divisive concepts and having thousands of followers.

Every time we come across lies on social media and shrug them off, every time we believe the lies being fed to us on WhatsApp over what we learnt in history textbooks, we are contributing to the poisonous discourse.

Voting rights presume a level of intelligence and the ability to choose in the voter, and hence also expect some responsibility from us. No ideology is worth allowing our sense of reason to be taken hostage.

But more importantly, when our manipulated emotions are emboldening people to call for violence and bloodshed, the first response needs to come from us the users of social media, rather than waiting for action from firms or the government.