How Gandhian agriculture can save farmers and farming in India

The farm crisis, at long last, is attracting both public and political attention. A National Policy for Farmers was formulated in 2007 by the National Commission on Farmers (NCF) chaired by me. That draft policy plays special stress on enhancing the income of farmers. A formula was suggested for determining the minimum support price (MSP) for farm produce.

Although this report is now over 10 years old, no action has been taken on its implementation, particularly with reference to the economics of farming. The monsoon and the market are two of the major determinants of farmers’ wellbeing.

Today, the monsoon is uncertain and extreme events like drought and floods are becoming more frequent. Similarly, the market, in most cases, does not help farmers to come out of debt and poverty traps. This is why there is more demand for loan waivers.

The time has come the National Policy for Farmers, which represented the voice of the farming community, is examined and acted upon.

Through the boycott of cities with reference to the supply of milk and vegetables, the farmers of India are giving a glimpse of the social implications of the neglect of farmers and farming. The public, therefore, should extend their full support to enable farmers to survive economically, since if farming goes wrong, nothing else will have a chance to go right in a predominantly agricultural country like ours. Women farmers and peri-urban agriculture should receive particular attention since these can make a large difference to our agricultural destiny. 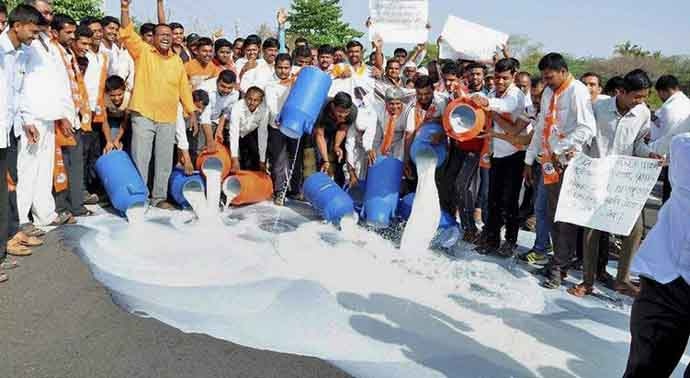 Farmers spill milk on the road during a state-wide strike over various demands at a village in Maharashtra. (Credit: PTI Photo)

A report of the United Nations released on June 20, 2018 points out that the number of hungry people in the world has risen for the first time in more than a decade — there are now approximately 38 million more undernourished people in the world than in 2015.

This is an enigma because considerable political and professional public and media attention is now being paid to methods of eliminating the curse of malnutrition which has adverse impact on both physical and mental capabilities.

Malnourishment in young children and pregnant mothers leads to the impairment of cognitive abilities themselves. Why is this persisting and what is the way out? In my view, all the three major forms of hunger — calorie deprivation, protein hunger and hidden hunger caused by micronutrient deficiency — can be overcome speedily if agriculture, nutrition and health are viewed in an integrated manner.

This is particularly true in predominantly agricultural countries like India.

It is time that we not take such statistics likely and treat them just as statistics since the malnutrition data has lasting implications, leading to intellectual and physical dwarfism. This will be a great disservice to those suffering from avoidable malnutrition if we do not take steps to provide them with opportunities for a productive and healthy life.

We should particularly be aware that there is a way out of this hunger trap — there is no excuse for not caring for the implementation of a malnutrition-free society. 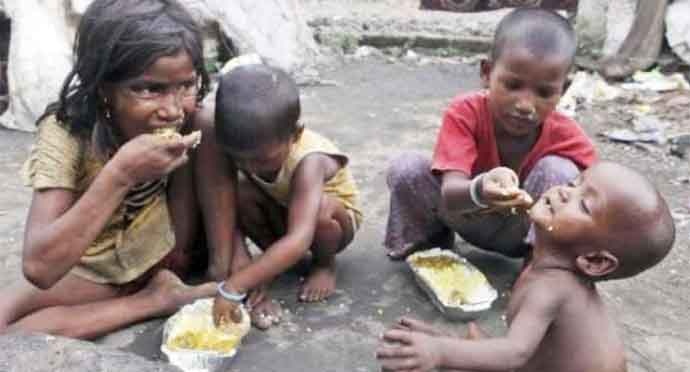 There are now approximately 38 million more undernourished people in the world than in 2015. (Credit: Twitter)

On the occasion of the birthday of the late JRD Tata on July 29, 2018, the MS Swaminathan Research Foundation and Tata Trusts together organised a consultation on achieving the goal of a malnutrition-free India as soon as possible. JRD Tata used to tell industrialists that we must give back to society more than what we take from them. The MSSRF has named its Ecotechnology Centre after JRD Tata.

The consultation on a malnutrition-free India was inaugurated by Vice-President Venkaiah Naidu, who emphasised the need to enlarge our attention from food to nutrition security — for this purpose, the MSSRF has been trying to link agriculture, nutrition and health into symbiotic partnerships. It has also been organising genetic gardens of biofortified crops. There is a need to enlarge our attention from food to nutrition security. (Credit: Reuters Photo)

In this way, we will not only be fulfilling the goal of Mahatma Gandhi, who once said that “to the hungry, God is bread”, but also of JRD Tata who wanted us to mobilise our intellect and capital for a happy India. A priority task is to evolve from food security to nutrition security.

Beyond the flood fury in Kerala

There are signs of abatement of the rain fury in many parts of Kerala — thus, the time has come both to look back and look forward. The immediate concern should be relief and rehabilitation of the affected population. At the same time, an inter-disciplinary committee could be set up to mitigate hardships during similar future rain-induced problems. I have dealt with these in several reports, lectures and in the Kuttanad package.

Immediately, there have to be programmes aiming at the rehabilitation of agriculture and the plantation industry.

At the same time, drinking water supply should receive overriding priority. It is essential to avoid water-borne diseases. In future, we should set up in every panchayat a rainfall management centre, which will prepare both drought and flood codes for anticipatory action. For example, immediately in the case of agriculture, farmers need seeds or planting materials. The appropriate varieties will have to be provided. This will need building of seed banks for use on occasions like this.

I hope the calamity caused by the floods will become an opportunity for a flood-tolerant agriculture. At the same time, the human dimension of flood management needs adequate attention.

Sustaining and expanding the horticulture revolution for nutrition security

Horticulture production has reached 307 mt during this year, thereby making us one of the largest producers of fruits, vegetables and flowers. A major problem in horticulture has been the deterioration in quality, caused by inadequate cold storage and processing facilities — the Prime Minister’s goal of doubling farm income can easily be achieved if horticulture crops are integrated in the farming system.

Also, we can aim to produce 500 mt of fruits, vegetables and flowers in another ten years if we can promote peri-urban horticulture. The horticulture revolution can help us overcome the crucial problem of a lack of micronutrients in our diet. (Credit: Reuters Photo)

What is important is integrated attention to production, storage, processing and marketing on the one hand and improved consumption on the other.

Our country is known for its problems of malnutrition and hidden hunger, caused by a lack of micronutrients in diet. The horticulture revolution can help us overcome this problem and help convert the goal of moving away from food security to nutrition security. Conservation, cultivation using organic farming methods, consumption and commerce are all integral parts of the movement “horticulture for nutrition security”.

The occurrence of floods in Kerala and several other parts of our country would lead to our forgetting that soon, we will be confronted with widespread drought. This has been our past experience.

Therefore, we should take proactive steps for ensuring water security for farmers. We should make rain water harvesting mandatory both in rural and urban areas. This will help dry farming areas with the possibility of a crop life-saving irrigation. Other desirable practices, like raising community nurseries, will also become easy. Rain water harvesting will help to enrich the aquifer and thereby limit the dependence on surface water resources.

Inter-basin transfers of water through river linking should be encouraged and made possible. Linking the rivers of peninsular India, which are under our political control, would help to create an Indian Rhine in South India.

All this will need the fusion of technical skill, political will and people’s cooperation. September 12 was the 9th death anniversary of Norman Borlaug, the greatest hunger fighter of the 20th century.

Alongside though, there is a report from several UN organisations that the number of the hungry has increased to 821 million from 16.6 million since 2009 — the highest in eight years. I have formally drawn attention many times to the anomaly of the coexistence of grain mountains and hungry millions.

Obviously, food production alone is not enough. We have to take steps to ensure that every child, woman and man has the ability to access and absorb the needed food. This will call for a cadre of hunger fighters in every village.

The MSSRF has developed a training programme for hunger fighters. A panchayat-level committee can undertake the task of training adequate numbers of hunger fighters who will help to ensure that in the concerned village, all the three forms of hunger — undernutrition, protein hunger and hidden hunger caused by micronutrient deficiencies — are eliminated. Nobel laureates like Dr Borlaug have shown the way to achieving freedom from hunger. When food production alone is not enough. (Credit: PTI photo)

It is now up to the political leaders and policy makers to help develop appropriate public policies to achieve the goals.

It is only an interaction between technology and public policy that can end the paradox of hungry people living alongside grain mountains.

It is now recognised that unfavourable economics is resulting in numerous difficulties to farmers. I am glad the government of India has taken two major steps to correct the imbalance. Firstly, more favourable minimum support prices (MSP) have been announced. Secondly, the government has also decided to purchase surplus grain on the basis of the improved MSP. Procurement is vital to ensure that the MSP is meaningful. We need to attend to all three major aspects governing the economics of farming — providing a favourable MSP, public procurement to ensure that the MSP reaches the farmers, and finally, public distribution that will end the dichotomy of grain mountains coexisting with hungry millions. Strengthening the procurement system will also need greater investment in post-harvest infrastructure.

If these problems are attended to, a major cause of the farmer’s distress would have been attended to.

Considering all these events, farmers’ chose the correct occasion for their mega rally on October 2 this year.

One of the major demands at the Delhi meeting was the implementation of the Swaminathan Committee Report on minimum support price and procurement policy. 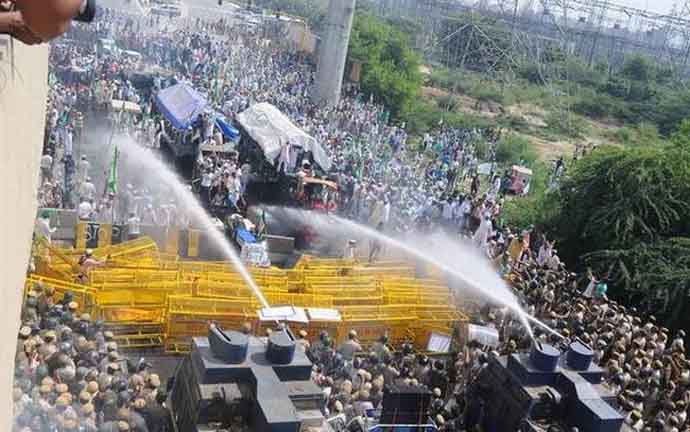 I hope there will be greater public awareness about the urgency to make farming economically viable, and that, in the future, such a mega rally will be organised to celebrate the life and message of Gandhiji and Lal Bahadur Shastri, and not just for economic survival.

A major challenge in achieving the goals of sustainable development goals (SDG) is the integration of economic viability with social and environmental sustainability. This is where new eco-technologies become important. I stressed this point in my lecture on “Agriculture and Spaceship Earth”, in 1973. For the purpose of promoting environmentally sustainable technology, I advocated Gandhian agriculture where productivity can be enhanced without harm to the environment.

I wish to quote on the occasion of Mahatma Gandhi’s 150th birth anniversary, the following from my 1973 Sardar Patel Lectures:

“Based on the most advanced principles of biological science, we can probably claim to have developed a Gandhian Agriculture, because this would be an agriculture where Gandhian concepts become manifested in the form of an advanced rural economy, benefiting all sections of the community. Also, this will be an agriculture which enriches and not harms the environment.”

Gandhian agriculture is based on the principle of non-violence to nature.

What we need today is to spread the idea of Gandhian agriculture — which is the pathway to sustainable food and nutrition security.