Inspired by the Wizard of Oz and Elton John’s popular number, the ‘Yellow Brick Road’ restaurant will satiate all your food cravings

Located in the corner of The Ambassador hotel, the restaurant whips up sinfully delicious delicacies that will give you multiple foodgasms.

For music lovers, a restaurant couldn’t have a more evocative name than Yellow Brick Road. It’s the title of what critics have widely regarded as Elton John’s best song ever — it’s also the name of his best-selling 1973 album that has the song — inspired by the imagery of the film adaptation of Lyman Frank Baum’s eternal parable of hope for misfit children, The Wizard of Oz. It’s the road that leads to the Emerald City in the land of the Wizard of Oz — a metaphor for the path that leads to life’s fantasies or even answers to the questions we may have about it (like the ones entertained by Dorothy, the principal character of the story).

Tucked away in one corner of The Ambassador, the hotel in Sujan Singh Park that started out as living quarters for British soldiers during World War II and has been inseparable since the 1940s from New Delhi’s history, Yellow Brick Road (or YBR in popular parlance), previously called simply the ‘Coffee Shop’, may not offer you answers to your questions about life. But its old favourites — from the nostalgia-laden Railway Cutlet, the comforting Mulligatawny Soup and YBR Chicken, and Sheila Dikshit’s favourite, Fried Fish with Tartare Sauce, to the unbeatable Bull’s Eye — certainly make life seem better. 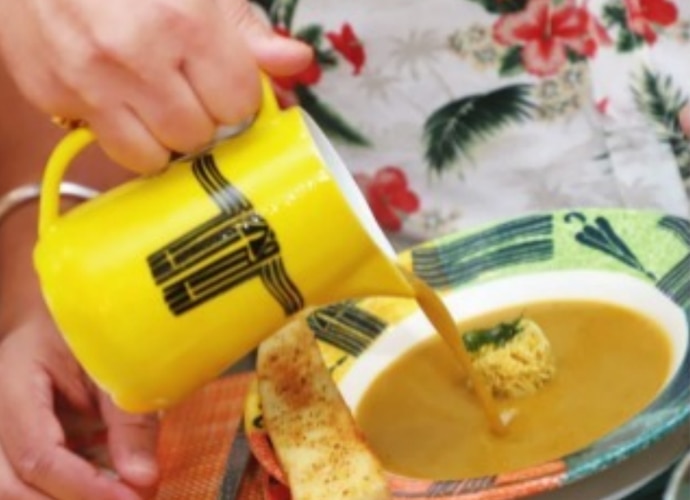 It’s been 20 years since YBR acquired its present personality and its playful colours, thanks to its hugely talented designer, Iram Mukherjee, and it continues to be as charming as ever. The Ambassador, which has been a managed hotel of the IHCL (the Taj Group) since 1990, and was just brought under its newly minted SeleQtions brand, was the result of a partnership between Sir Sobha Singh, one of New Delhi’s builders (and the late writer Khushwant Singh’s father), who developed the Sujan Singh Park apartments along with the British architect (and associate of Edwin Lutyens) Walter Sykes Georgie, and Ram Pershad, a visionary hotelier who was Pandit Jawaharlal Nehru’s adviser on all matters concerning the hospitality industry.

It was Ram Pershad, who had a hand in the creation of The Ashok and the birth of the Federation of Hotel and Restaurant Associations of India (FHRAI), who helped Sir Sobha Singh transform what were military officers’ quarters into a hotel with the mod-cons of its time (1949-50). I met Ram Pershad’s son, Rajindera Kumar, the Cornell-trained present owner-director of The Ambassador and a former two-term FHRAI president, at YBR’s 20th anniversary celebrations, and I got him talking about his father. Ram Pershad, his son informed me, started life as a gatekeeper in a cinema theatre and then became the projectionist, before going on to become the manager, in succession, of the two prestigious department stores of the Raj — Gaindamull Hem Raj in Shimla and the Empire Store in Connaught Place. He was introduced to Sir Sobha Singh by the well-known contractor, Tirath Ram Ahuja, because the builder needed help to feed the British military officers living in his compound and Ram Pershad was already catering to those encamped around India Gate. The partnership led to the development of The Ambassador, which opened as a 100-room hotel in 1949-50. I asked Kumar, whose first assignment at the hotel after returning from Cornell was to open the nightclub ‘Wheels’ in 1970, for the recipe for YBR’s ageless appeal.

He said it survived on old memories and the passion of the management to “maintain and sustain” the exacting standards it had set for the restaurant, down to the art of making a jacket potato stand on its own. “You cannot buy passion,” said the impeccably attired hotelier, sitting in his little corner office crowded with memorabilia and files, from where he guards his family jewel.

Also Read: Cauliflower calling out to all the health freaks