Why Ganesh Chaturthi can never be complete without modaks

“Matches are either made in heaven or in Indian Air Force” had been this handsome pilot’s playful cheeky retort when I gave in to his proposal. Looking back, I think ours was made in both; for, he first came into my life boisterously dancing atop a truck’s roof to "moraya re, bappa moraya re".

My fondest memories of Ganpati festival are from annual celebrations conducted by a small community of Maharashtrians at Ghaziabad. Every year, the members of Maharashtra Samaj would organise a ten-day celebration where we kids could perform dances, plays and participate in competitions. The festival would culminate in the visarjan procession to a pond on the outskirts of the town.

For 10 days, the evening 'aarti' meant a variety of prasad offerings from different families. There would be homemade nariyal barfi, rava laddoo, shira or semolina halwa. Two other preparations that made Ganpati festival special for me were vatali dal and modak. Vatali dal was made by mixing grated raw mango with coarsely ground soaked chana dal or split black gram tempered with sputtering mustard seeds in hot peanut oil. 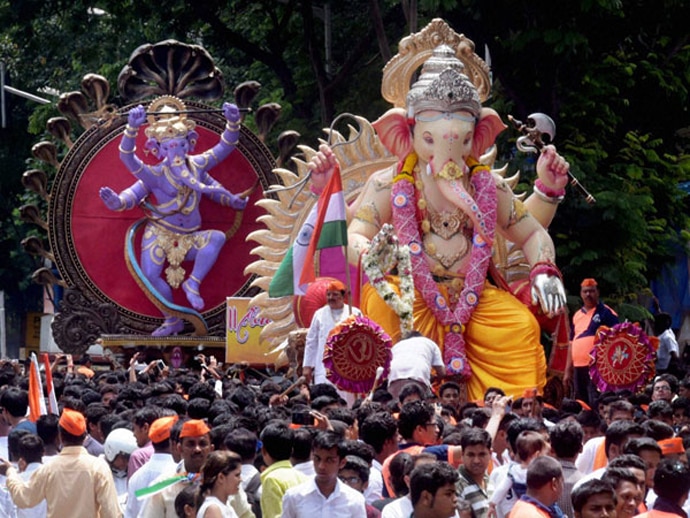 The dal was special for me not only for its taste but because it always became bone of contention between me and the mischievous boy, who would later woo me as a young pilot. Teenagers that we were; his antics aimed at drawing my attention had had their effect gradually. I looked forward to the festival every year just to have some interaction with him even if it meant fighting for an extra helping of vatali dal.

But at times vatali dal could not be catered for, however Modak was always there; the plump bud shaped sweet in all sizes, a favourite of Lord Ganesha. Modak made during those gatherings was like the gujiya of North Indians or karanji of Maharashtrians. Just the shape was different. These sweet bulbs that were easy to pack, carry and distribute during the visarjan procession were made of maida or self-rising flour and deep fried in ghee.

The deep fried modak last longer and can be stored for few days. I make this version hoping it would last for fifteen days at least but often these are gobbled up much before that.

A slightly stiff dough is made by mixing maida and moyan or oil for the soft crispiness with little water or milk. Small portions of dough are rolled into small discs and filled with either the mix of grated and toasted coconut, dry fruits and sugar or tender coconut cooked with sweetened milk.

The trick lies in folding the disc. The disc is cupped in one palm with the filling in the center. A dab of milk on edges works as glue as each fold sticks together. The first four folds by pinching the disc are along the imaginary centre lines and the gaps are further pinched and joined with the main folds. This gives a beautiful shape of lotus bud to the disc. All folds are then given a gentle twist to seal the filling from oozing out during frying. Melting moments: The shell of steamed modak is made from Basmati rice flour for best results. (Photo: Facebook)

I made my first fried modak in Srinagar for first Ganpati festival after marriage. It was a disaster and left me tired and teary-eyed. The filling wasn’t dry enough and the dough wasn’t stiff enough. Most modaks cracked while frying and the ghee splattered everywhere.

In two years, we moved to Pune and Ganpati festival became larger than the festival of my childhood. At Pune, young boys drummed away the dhol, large pandals with larger idols sprouted at every street corner outdoing each other and crowds swelled on the roads blocking all traffic.

On our way to Pune, we had stopped at his maternal uncle’s home at Bhusawal. It was there that I first discovered steamed modak. To a newly wed, the process of making rice flour dumpling pregnant with tender coconut cooked in jaggery seemed quite a daunting task.

Later, another batch of melt-in-mouth sparkling white soft and hot modak served with ghee at a restaurant in Pune, made me fall in love with the superior and more delicate version of modak that I had grown up feasting on. 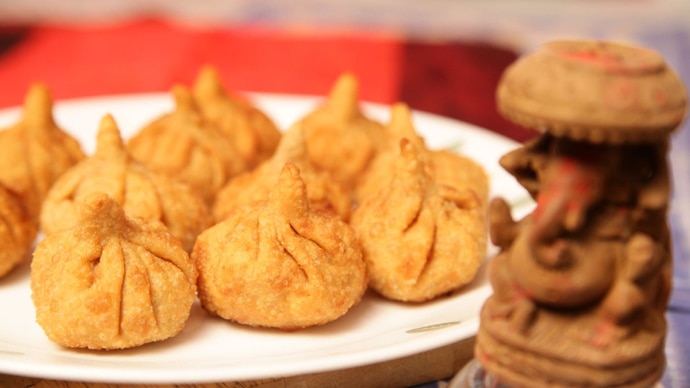 Modak magic: As the festival nears, the sweet shops would be flooded with a variety of moulded modaks. (Photo: Facebook)

The shell of steamed modak is made from Basmati rice flour for best results. Hot water twice the volume of rice powder and oil is poured onto the flour and mixed vigorously to avoid lumps. Once the paste thus formed cools, it is pounded and worked into a pliable ball of dough. This is stored in wet cloth till shaped into modak. For the filling grated tender coconut is cooked in jaggery with nutmeg, cardamom and khuskhus or poppy seeds. Shaped just like the fried modak, these are however steamed. A slight change in colour and smoothened texture indicates the modak is ready to be served hot with molten ghee.

Over the years, my modaks have improved — both the fried ones and the steamed ones — and every year I make at least one batch of each as prasad for Bappa.

As the festival nears, the sweet shops would be flooded with a variety of moulded modaks from chocolate to mawa to colourful little ones; a shorter route to celebrate 10 days of Bappa’s visit.

But whether you steam it, fry it or take the modern quick-fix way, no celebration will be complete without those sweet rotund knobs; modak will always be irreplaceable.