Delhi-NCR doesn't seem to have learnt any lessons. Nor does it seem to be in the mood to learn.

It wasn't a usual monsoon evening in Greater Noida on Tuesday (July 17). Not a single drop of rain had fallen in the entire day.

But the dingy lanes of Shahberi village or what is now known as the newly developed Noida Extension were still flooded with sewage water and rains received earlier.

Around 9pm, one of the buildings collapsed like a pack of cards. Initial reports said a six-storey under-construction building had fallen on an adjacent building, killing at least three people while many were still trapped under the debris. The second building had also collapsed under the impact.

By next evening, the toll rose to five in one of the worst building collapse incidents in recent times. Yes, one of the collapses, because Delhi-NCR residents by now have internalised such traumatic experiences. The last "really big" building collapse was in Delhi's Laxmi Nagar in 2010, the infamous 2010 Lalita Park building that caved in and claimed 71 lives.

Sadly, Delhi-NCR doesn't seem to have learnt any lessons. Nor does it seem to be in the mood to learn. 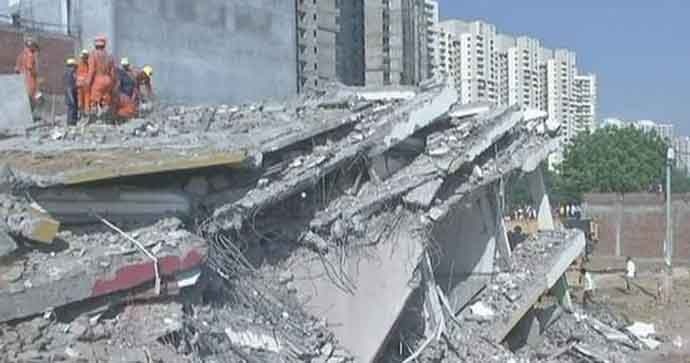 While the incident occurred around 9pm, the biggest challenge for the rescue team was to enter the dingy lanes. The entire area was blacked out by power cut when the police and the NDRF teams arrived. To add to the trauma, the lanes were flooded.

The remains of the two buildings had taken the shape of a mound, and when the NDRF started its rescue operation around 11pm, neither they nor the Noida Police had any clue about how many people were trapped under the rubble.

As usual, there were massive violation of building regulations at various levels because of the blatant corruption that has marred the construction industry, especially in Noida and Greater Noida areas.

It's not that people don't know how these buildings have come up. Yet, they are forced to go and buy flats in those dark alleys because of the lack of affordable residential units available in the area.

As a result, the nexus of builders, bureaucrats, police and politicians have been exploiting the flat buyers. According to an estimate, there are more than 10,000 residential units in the Noida, Noida Extension and Greater Noida areas, which have been constructed without following building norms.

As of now we don't know what happened, it is too early to say anything in that regard. Our motive right now is to save any life that is left. Rescue operations by NDRF are underway: Kumar Vineet, ADM, Gautam Budh Nagar on building collapse in Greater Noida's Shah Beri village pic.twitter.com/gKTzytr7im

The latest incident occured in Lal Dora area. Most of the land plots in and around Shahberi village have been acquired by the Greater Noida Authority where private builders have been building their projects. The remaining land was given to farmers with a clause that the land will be used for their personal residences.

However, farmers in collusion with the Authority officials have sold the land plots to small-time builders.

These builders, in turn, have constructed numerous housing units on a small plot. For example, the two ill-fated buildings, had five floors each and four flats in each floor, which means the buildings were constructed for 40 families in total.

Construction activities in this Lal Dora area are going on without any approved maps and building plans, which is not possible without the acquiescence of Authority officials since they are the ones who issue the completion certificate. And while issuing the same, authorities are also supposed to check the quality of the building and other necessary permissions.

Noida and Greater Noida are favorite destinations of all those looking for affordable housing options. The lower middle class in particular finds these illegal housing options affordable as the builders offer them these flats at a much lower price than the current market rates in nearby areas. So, in a way, while the government failed to provide cheaper housing options to the citizens, builders took it upon themselves to do that, and how.

Even though a judicial inquiry has been ordered into the matter, local residents claim that they have been complaining the local authorities and police about the illegal constructions in Shahberi and nearby localities for long. No one paid any heed.

Well, no one will, until the next tragedy.

#Man-made disaster, #Disaster management, #Building collapse, #Greater Noida
The views and opinions expressed in this article are those of the authors and do not necessarily reflect the official policy or position of DailyO.in or the India Today Group. The writers are solely responsible for any claims arising out of the contents of this article.