'Will I marry me?' Why these shaadis have one thing missing. Either the bride or the groom

Weddings world over are seen through the rose-tinted glasses of perfection, extending all the way to the happy couple. But there are some people out there who see wedded bliss differently.

Around 800 people had a blast at Ajay Barot’s wedding held recently at Himmatnagar in Gujarat’s Sabarkantha district. Every ritual was performed to a tee.

But there was no bride.

According to reports, it was not easy for Ajay’s family to find a match for him because 27-year-old Ajay has certain challenges. He also lost his mother at an early age and due to the challenges he faces, he could not receive a formal education. Ajay was, however, enthusiastic about getting married. He used to attend all the wedding functions in his locality and he would talk about his own wedding. Clearly, his family was moved by the young man's dream.

Ajay’s father, Vishnubhai Barot, works as a conductor with the Gujarat State Road Transport Corporation. He is happy that he could fulfil his son’s dream without thinking about what society would think. He also had other family members by his side.

And thus, we have had a most heartwarming wedding, although it didn’t have a bride. 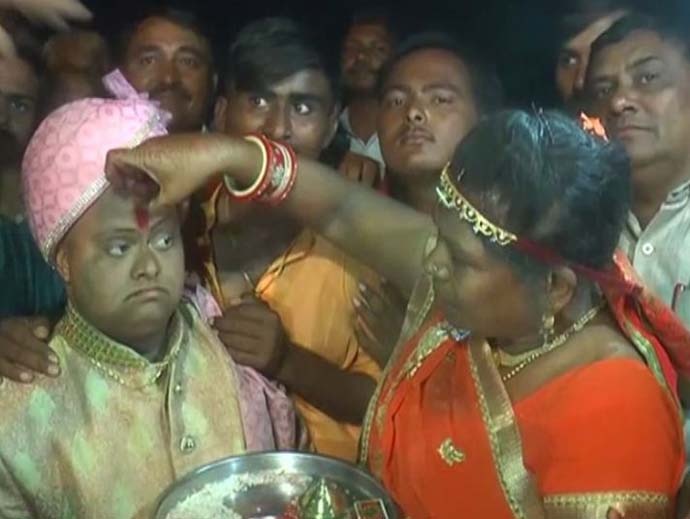 It's all about happiness. (Photo: ANI)

This might be the first such wedding in India. But of late, we have seen many such unusual weddings around the world.

In 2018, Lulu Jemimah, a 32-year-old Oxford University student from Uganda, wore a wedding gown and walked down the aisle to be with herself for the rest of her life.

“My father wrote my wedding speech when I turned 16. Every birthday, my mother prays for me and in recent years this has included a plea for a good husband. Someone to take care of me. I decided to put them all at ease. I got married on my 32nd birthday,” Lulu wrote, explaining her decision.

The story is the same for Italian fitness instructor Laura Mesi — who went to Egypt on her honeymoon after her wedding to herself — and Linda Doktar — an Australian life coach.

All these weddings may seem imperfect as either the bride or the groom is missing.

But importantly, all of them are happy.

For Ajay, the driving point has been his own dream of getting married in a happy ceremony because every one around him would be doing the same. For Lulu, Laura and Linda, it might be parental or societal pressure to get married.

The fact is, world over, we see weddings through the rose-tinted glasses of 'perfection'.

It’s overwhelming. But then, there’s a way out as well. And it’s right there. A simpe truth in your own heart. Which is also something you could choose to love, honour and cherish all your life.