5 things you must know about Hardik Patel's wedding

Both of their native places is Viramgam in Ahmedabad.

2018 was the year of big celeb weddings. In contrast, 2019 had a low-key start with Patidar quota leader Hardik Patel getting married to Kinjal Parikh in a closed ceremony attended by only 100 people at a temple in Digsar village of Surendranagar district.

Twitter is very happy to see a 25-year-old leader getting married and commented vociferously on how marriage can bring calmness and maturity in Hardik!

Here are five things you must know about the wedding and Kinjal Parikh:

It is an ‘arranged love’ marriage

We all know how Indians arrange that. Kinjal was a classmate of Hardik’s sister, Monica. They have known each other for a long time. According to reports, the families knew each other for the last 25 to 30 years. Well, Hardik is 25 years old.

Both of their native places is in Viramgam in Ahmedabad. Like Hardik, Kinjal is also a commerce graduate. She is pursuing law now. Her father, Dilip Parikh, also a Patidar, is apparently a real estate businessman. Their engagement was announced in 2016 when Hardik was in jail. The wedding took place according to Patel rituals. 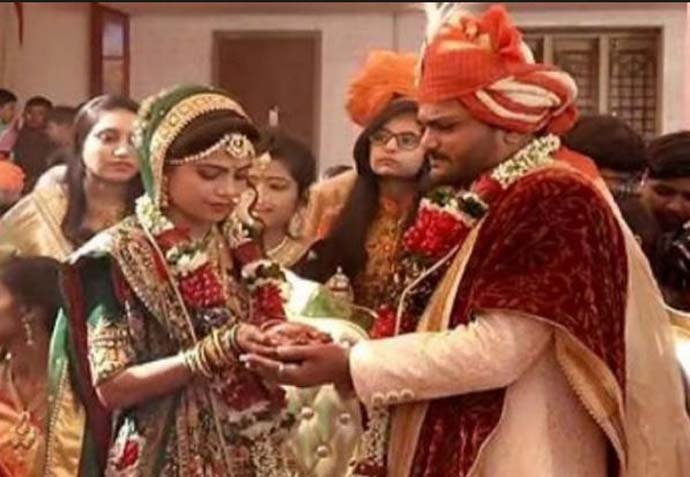 The duo tied the knot at a temple on January 27. (Photo: ANI)

This is the beginning of the second inning of my family life. My resolution will be of everyone getting equal opportunity. The demand with which we had come out was that all men and women should get equal rights. So, I will promise my wife that she will get equal rights; and together we will fight for ‘navnirman’ (new beginning) of the country. Our (collective) resolution is only one, which is to fight collectively…for truth, for people and for equal rights

This is what Hardik Patel said after the wedding.

Who proposed to whom

Though it should not matter. But as the young leader has now made it public, it was apparently Kinjal who had proposed to Hardik.

The original plan was to hold the wedding at Umiyadgam in Unja in Mehsana district. But Hardik is barred from entering the district as per bail conditions. So, the families planned to keep it very simple.

We congratulate the newlyweds.

Also Read: Chicken nuggets for vegetarians now: Why is vegetarianism treated so callously?