DailyOh! What happened when Rahul and Priyanka Gandhi tried to reach Hathras

The Gandhi siblings have been detained by the police at a guest house.

The Gandhi siblings, two in number, started off for Hathras this noon in their cars to meet the alleged gangrape and murder victim. The UP administration stopped their cars on the Yamuna Expressway so the siblings decided to walk it out to Hathras, a distance measuring over 110 kms. Priyanka Gandhi, the younger sibling, said even if it takes a couple of days to reach, they will reach.

And then in the scuffle that ensued, the older of the Gandhi siblings, Rahul, was thrown to the ground. 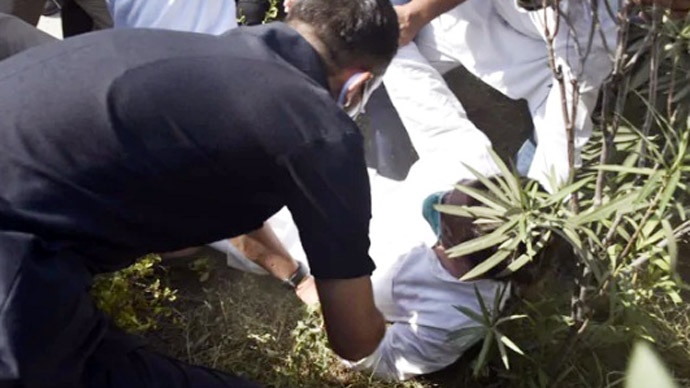 Rahul Gandhi with sister Priyanka during the protests against Hathras horror.

The siblings were then packed up in a UP Police vehicle and detained at a guest house. Both Gandhis kept repeating they want to go and meet the victim’s family in Hathras.

But what awaits the Gandhis at the Hatras district border, in case they manage to reach, is Section number 144 of the Criminal Procedure Code. Section 144, which will remain in force till October 31, prohibits a gathering of more than four people. That should allow the Gandhi siblings, who we counted as two, and at least two of their supporters to get in. Just the fact that someone is walking 110 kms to meet someone should also allow the meeting.

Borders of Hathras are sealed. Section 144 of CrPC has been imposed in the district, more than 5 people are not allowed to gather. We've no information about Priyanka Gandhi's visit. SIT will meet the victim's family members today, media will not be allowed: Hathras DM P Lakshkar pic.twitter.com/bU3MXLre7x

Section 144, however, did not stop the three-member Special Investigation Team (SIT) from meeting the victim’s family. The victim’s autopsy report meanwhile is in and has brought out the fact that the victim suffered fracture in her spine and was also strangulated. The FSL report shows that the victim was not raped because no semen has been found on her. In her dying declaration, the victim did say she was raped.

Uttar Pradesh yesterday reported another case of rape and murder from Balrampur. Reports that suggest the victim’s legs and hands were broken have been denied by the Balrampur Police.

The two accused are in custody.

Two minors from Rajasthan’s Baran too were raped allegedly over three days in Jaipur and Kota reportedly by two other minors. A woman, according to data, is raped every 15 minutes in India. That is recorded data of reported cases. Countless cases leave unreported rape victims.

For some time now, there has been a debate over whether to call a woman who has been raped a victim, or survivor. If someone dies during or after rape, you can’t call the person a survivor.

So, you fall back on the use of victim. The word is used for most people who have suffered from an earthquake to a flood.

Victim, the Word Of The Day, comes from the Latin word victima. Its first sense is that of a sacrificial offering, and was used in the 15th century. Not all animals, but those to be sacrificed.

So the word has had quite a journey, you see.

Filmmaker Anurag Kashyap today undertook a small journey from his home to Versova police station for questioning in a sexual assault allegation. Sushant Singh Rajput’s ex-manager Ankit Acharya and friend Ganesh Hiwarkar will be undertaking a journey from the Delhi airport to Rajghat and then sitting on a hunger strike tomorrow demanding an update from the CBI on where the investigation has reached. You do know why tomorrow and why Rajghat but Ankit and Ganesh, perhaps, don't know that the CBI is not supposed to issue regular updates on cases.

Bollywood has been going through a rougher patch than the rough patch that 2020 has subjected all of us to. Come October 15, some of that may begin to change with cinema halls opening up. Movies were releasing even on OTT, but people had no other way to release their anger than sit at home and tweet and post posts.

Talking of Bollywood, today happens to be the birth anniversary of poet and lyricist Majrooh Sultanpuri. He died 20 years ago on May 24, 2000, but his work lives on and helps many live. But did you know that singer-actor KL Saigal wanted Sultanpuri’s creation 'Jab dil hi toot gaya’ to be played at his funeral?

Sultanpuri, born as Asrar ul Hasan Khan, thought so low of films that he never wanted to get into the industry. It took another Urdu poet Jigar Moradabadi to convince Sultanpuri to write for films because that would pay well. He was then taken to music composer Naushad. Naushad gave Sultanpuri a tune and told him to write the lyrics for it. That’s how ‘Jab usne gesu bikhraye, baadal aaye jhoom ke’ came into being.

If you love old songs, you know what should be on your playlist today. Car lovers, meanwhile, are back to buying cars; not all cars, but small cars. That may prove it’s not love but need in the absence of reliable public transport. But then love too is a need. Forget philosophy; let’s talk economy. People are buying cars and in September 2020 bought more cars than they bought in 2019.

Expect more cars on the road, but expect more carrots on the road? How much ‘more’? As much as 29,000 kgs of it. It didn’t rain carrots. It was some arty-farty stuff. The 29 tonnes of carrot were dumped by a lorry in front of Goldsmiths College in south London because a student was trying an art installation.

And before you cry wastage, know that the carrots had been branded ‘not worth of the shelves’ in the UK and were donated to farm animals by the artist after the art show. We didn’t get the art but we appreciate the fact that the carrots were put to good use and someone got fed.

Ghost towns are where you may find some souls loitering too. But listening to Living in a Ghost Town may bring your soul (back) to life.

Try that and whichever way your experiment goes, you can let us know in the comment box below.

Also Read | From Hathras to Balrampur: Why rape and death are fine but injury details aren’t