Why I believe Imran Khan can and will change Pakistan

The most significant trait of Khan's leadership is his absolute love for the country.

Lying straight on the hospital bed, a thin sheet covering his long, slim body, staring listlessly at the TV screen, he looks up when I approach him. A woman who I assume to be his mother is sitting on a sofa that serves as her bed in the long days and nights at the hospital looking after her son. There is an IV drip connected to his hand, a constant supply of medicine that keeps him strong to fight what is a long, merciless, cruel disease.

Next to his bed are two crutches. His right leg was amputated a few weeks ago. He is 17 years old. And he is a bone cancer patient.

The mother's story is long and painful. After going from doctor to doctor, one government hospital after the other, on her young son been diagnosed with cancer, the treatment of which would cost more than two million (Pakistani) rupees, she ended up at the only hospital that provides free treatment to 75 per cent of its patients, and gives them the service that its paying and its wealthy patients receive. Imran Khan's Shaukat Khanum Memorial Hospital (SKMH), Lahore. 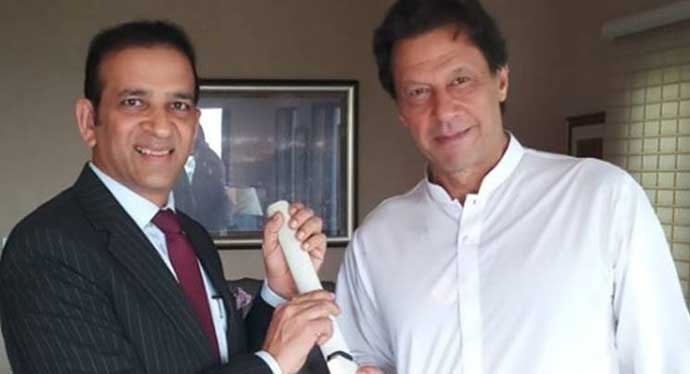 Since the last few weeks I've been volunteering at the SKMH, visiting children with cancer, and talking to them and their parents or attendant siblings. The stories are almost the same: children from underprivileged families from all over Pakistan, a deep sense of pain and loss, and an endless reserve of strength, patience and gratitude. Watching their three-year-olds, 10-year-olds, 15-year-olds go through treatment of cancer that is long and painful, there is one thing that keeps them going: their children are given the best available treatment, and they don't have to worry about how the medical bills would be taken care of. All of them feel a sense of gratitude to Imran Khan, and all of them pray for him.

Many after their loved ones were treated at the SKMH, changing their old political loyalty, voted for Khan's party, Pakistan Tehreek-e-Insaf (PTI).

That to me is Khan's special gift, his unique reward, his one-of-a-kind empathy that despite all odds, irrespective of his political relevance or insignificance over the years, exclusive of his political battles and stances, away from his oft-unworkable bravado and his big promises of change, remains unaltered, irrevocable and undiminished. Imran Khan the philanthropist deeply cares for the poor, the underprivileged, the destitute, the hopeless, the forgotten, the invisible. And Imran Khan the politician is an extension of the philanthropist.

On August 18, 2018, Imran Khan will take the oath as the prime minister of Pakistan.

Amidst an economic disarray that has all the markings of a complete collapse; foreign debt and liabilities of almost $98 billion; an institutional tug-of-war; vitiation of civilian sovereignty; an alleged environment of overt and blatant interference and manipulation of the establishment; allegations of pre-poll rigging; a hostile grouping of opposition parties that cry of being robbed of their electoral victory; a jailed Nawaz Sharif; accusations of media clampdown; a massive wave of inflation, unemployment and lawlessness; and a turbulent neighbourhood, Khan will assume power of a country that seems to be stuck in a dark cul-de-sac. I believe Khan will prevail. And this belief is not of a supporter of a party, or someone who voted for him. My belief is based on what I know of Imran Khan the man through things he said and did throughout his public life. Pollyanish? Imran Khan will take the oath as the prime minister of Pakistan on August 18. (Source: Twitter)

Maybe. Naïve? Perhaps. But unfounded? No.

Governments are run by capable leaders, their efficient and farsighted cabinet and advisers, formulation of policies, implementation of policies, zeroing in on tangible solutions for all issues from basic safety of life to economic rejuvenation to targeted, long-term prosperity, and improvement, establishment and functioning of programmes to tackle the micro and the macro. What makes a real difference is the integrity of the leader to have the best intention, the will to do it, and the determination to make it happen. Khan notwithstanding the bleakness enveloping Pakistan is the leader who can do it. The most significant trait of his leadership is his absolute love for Pakistan, and his relentless struggle to make it a country that is the best representation of the tremendous potential of its human and other resources.

A country like Pakistan that is crippled with issues on all levels would take baby steps towards long-term empowerment and stability if the elected leader has the will power, dedication and self-belief to do so. Khan, burdened by his lack of administrative experience, criticism on non-fulfilment of some electoral promises in Khyber Pakhtunkhwa (the only province where the PTI governed from 2103-2018), and his apparently fantastical ideas to change Pakistan, has the benefit of being a newcomer on the most powerful position in Pakistan.

Having already stated that his future official residence is not the majestic Prime Minister House in Islamabad, his security detail essential but not pompous and huge, that he will have a weekly appearance in the National Assembly, his selection of candidates is of the ones with clean records for all high-level positions in the Centre and in KP (where PTI has the majority) and Punjab (where PTI hopes to form the government), personal payment of cost of repair and furnishing of the house he will reside in as the prime minister, and an offer to have investigation of all electoral allegations from other parties, Khan is already walking the talk. That his words are not mere TV interviews bluster, or hollow promises of a politician trying to make Pakistan a corruption-free country, or wishful thinking of a man who has never been in power. Khan wishes to make Pakistan the best version of itself, and he will do it. And the driving force behind his systematic governance will be his deep concern and pain for people of Pakistan, the country he owes everything to, and the people who believe in him and voted for him. Imran Khan notwithstanding the bleakness enveloping Pakistan is the leader who can bring in a change. (Source: AP)

That reminds me of the conversation that I had after Khan's electoral victory of July 25, 2018 with Zaheer Abbas, a cricket legend, a former cricketing colleague of Khan and an old friend. Reminiscing about his almost 50-year-old association with Khan, Abbas said: "Imran's most important trait is jo sochta hai woh pura karke dikhaata hai. He can do it, his will is that strong. He has the positivity: I can, I will. His mother's dua has always been with him. The World Cup under his leadership is not a small thing, SKMH. It is all about his determination. Most importantly, money never mattered to Imran. He is incorruptible."

What I also remember is what Omar Farooq, a Lahore-based businessman, one of Khan's oldest and closest friends, and someone who is not a part of his political life, said about Khan: "There are not many people like Imran. One of his most special traits is his kindness to poor people. He is wonderful to people who work for him. Khan feels for the underprivileged, he thinks about them, he cares. He doesn't care about money at all; no wonder, he is incorruptible."

Two different people, one who knew Khan when he began his cricketing career, and one who remains a friend and a confidant to date, say the same thing about him. And many others who know him, love him, respect him, and some who don't even like him also share this opinion.

That is the Imran Khan that I believe in to do his best for Pakistan that almost 200 million people and I call home. He can. And he will.

And that is the Imran Khan that will take oath as the new prime minister of Pakistan on August 18, 2018.

Also read: The Imran Khan I know is his own man

#Pakistan Tehreek-e-Insaf, #Pakistan general elections, #Imran khan swearing-in, #Imran Khan
The views and opinions expressed in this article are those of the authors and do not necessarily reflect the official policy or position of DailyO.in or the India Today Group. The writers are solely responsible for any claims arising out of the contents of this article.