Increased dependence on China in the last few years had been detrimental to the growth of Indian MSMEs in the pharmaceutical sector.

The export of pharmaceuticals from China has been steadily shrinking for the last few months. This may turn out to be the big boost for Aatmanirbhar Bharat in pharmaceuticals.

India is home to one of the biggest speciality chemical industries globally. The disruption in the import of pharmaceutical chemicals from China may turn out to be the trigger that our industry needed to emerge not only as global generic suppliers but also suppliers of active pharmaceutical ingredients (APIs). In the last few years, the Indian pharmaceutical industry had become increasingly dependent on China for bulk chemicals or key starting materials (KSMs), drug intermediates, and APIs. The reason for this was the low costs. However, the price factor has now been taken over by geopolitical dynamics. 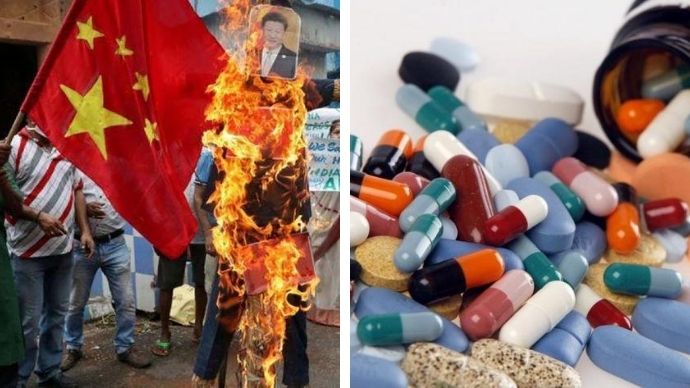 With diplomatic relations between the two countries plummeting, pharmaceutical industries in India have realised that it is time to get aatmanirbhar. (Photo: Reuters)

The government at the Centre has given this change a strong push by aiding the growth of the pharmaceutical industry. It has launched new schemes to promote the production of pharmaceutical compounds and the establishment of bulk drug parks in India. Domestic manufacturers will now have to scale up their production in order to generate enough supplies to meet local demand.

Pharmaceutical imports to India were impacted in February after China shut down its factories in order to control the spread of the coronavirus. Since then, Carbanio, an Indian business-to-business digital marketplace of chemicals, has claimed to have witnessed a 500 per cent growth in terms of volume. Supply chains were restored after a few weeks. The escalating border tension between India and China after the violent conflict at Galwan valley in Ladakh again disrupted the supply of bulk chemicals, drug intermediates and active pharmaceutical ingredients. With diplomatic relations between the two countries plummeting, pharmaceutical industries in India have realised that it is time to get aatmanirbhar (self-reliant) to meet the huge domestic demand and also provide for international supply.

The schemes launched by the Centre are formulated to promote the production of pharmaceutical compounds. The government is also boosting the setting up of bulk drug parks in the country. The pharmaceutical sector has emerged as a strong player in India in recent years. Industry players estimate that approximately 6.5 lakh businesses in India are engaged in the manufacture and supply of chemicals, 97 per cent of which are Micro, Small & Medium Enterprises (MSMEs). Increased dependence on China in the last few years had been detrimental to the growth of Indian MSMEs in the pharmaceutical sector. Even though these units possess the technology to meet the needs of the industry, their volumes were dwindling due to lack of demand and delay in payments. Constant interruptions in the supply chains with China and the restrictions imposed by the lockdown forced domestic players to source their supplies from local manufacturers. Bulk drug manufacturers are enhancing production with stronger backward integration with MSMEs. This has enabled the MSMEs to increase their output that may lead to healthy growth in their numbers and volumes.

The industry is hoping for government incentives that shall encourage entrepreneurship through industrial parks, cheap power and strong infrastructural support. Some of the important centres in the country for bulk chemicals or KSMs, drug intermediates, APIs and finished pharmaceutical products are Baddi (Himachal Pradesh) in north India, Mumbai and Ankleshwar in western India, and Hyderabad, Visakhapatnam and Bengaluru in the South.

Also Read: Total boycott of Chinese goods is impractical, but posturing is not a bad idea