DailyOh! Will inquiry against Amazon spell trouble for Jeff Bezos? Shah Rukh has the answer

Friday is here, and soon Monday will follow too. Just kidding! There are still two days in between.

Thank god, it’s Friday. But if you do not believe in god, you can just get done by thanking yourself for having sailed through the week, or life, for having pushed you through it. Whichever way you do it, Friday is here, and soon Monday will follow too. Don’t get hassled, we are just kidding!

Now, that we are done with our kidding part, let us get down to telling you what’s been happening around. These protests over the Citizenship Amendment Act we thought were happening only in India and in countries with Indian expat population, but a story published in ThePrint says, the protests have reached Argentina’s Mt Aconcagua. This one was a pro-CAA one though. While it may not be significant, but it sure issymbolic because Mt Aconcagua happens to be the highest mountain outside of Asia. 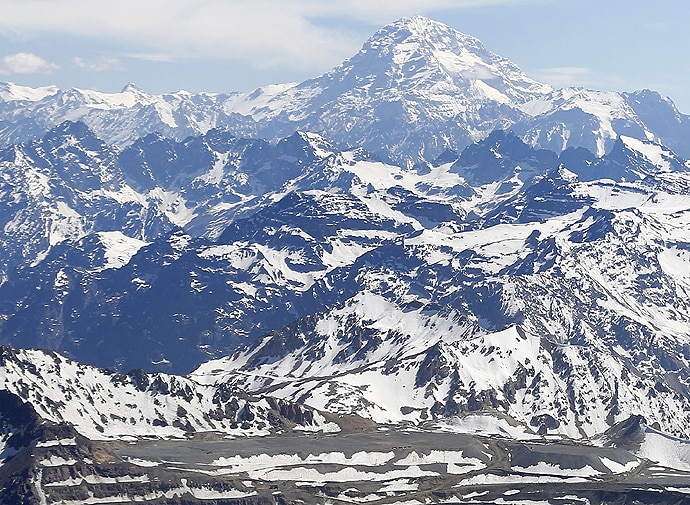 Mt Aconcagua happens to be the highest mountain outside of Asia. (Photo: Reuters)

A swayamsevak — they call Rashtriya Swayamsevak Sangh (RSS) workers that — raised a banner on the peak marking his support for the new law that grants citizenship to Hindus, Christains, Sikhs and Jains who have been victimised in either Pakistan, Afghanistan or Bangladesh. This person is a certain Vipin Chaudharuy.

Well, Vipin Chaudhary is also believed to be the man who held a shakha on Mt Everest. You must have heard about shakhas, but if you have forgotten what it exactly is, let us help you. A shakha is a term used to refer either to a school of the Vedas, or to the traditional texts followed by a school.

The RSS uses it for its daily congregations, which it says, involve physical and spiritual training. They are usually held around 6 in the morning (if you're not the early riser, you can just read and sigh from a distance). The RSS is of the view that women can’t be part of shakhas because early mornings are for household chores. So the women wing of the RSS, Rashtra Sevika Samiti, holds shakhas in the afternoon. How will office-going women attend? We will update you on that as soon as RSS announces a change in schedule in view of the changing times and needs.

Anyway, even if you largely keep away from politics, you must have heard about RSS in Rahul Gandhi’s speeches. Or maybe someone sent you a WhatsApp forward? Anyway. Rahul has been consistently — more consistent than his presence in India — attacking the organisation for spreading Hindu-Muslim divide. His great grandfather Jawaharlal Nehru too was opposed to the RSS on the same ground. Nehru in fact went a step ahead and imposed a ban on RSS in 1948, after Mahatma Gandhi was assassinated. But you will be surprised to know that the same Nehru is believed to have invited the same RSS to participate in the Republic Day parade of 1963.

Interestingly, the reason is apparently China.

We all know how distraught the 1962 Indo-China war had left Nehru. Some even say that it was the Chinese treachery that Nehru could never come to terms with and that trauma eventually led to his death in 1964.

It was reportedly the services that Sangh members rendered at borders during the war that made Nehru invite the RSS to the Republic Day parade. The RSS leaders have gone on non-stop about this. But then, many have challenged the reports and stories about the RSS participation. When the Defence Ministry was asked about, it said, "It is informed that records relating to the composition of the Republic Day parade 1963 are not available."

It’s not just the parade or the RSS’s participation that people are unable to agree on. There are as many views on any subject, as probably there are people in this country. The latest in this list of my-view-is-better-than-yours is our Word of the Day, 'swastika'. Yes, the same swastika you draw on your new cars and computers, also sometimes that Rs 1.15-lakh iPhone.

You must have gotten to know that a lot of people say that the swastika is a Nazi symbol. Should you believe them? Well, they are partly correct. Adolf Hitler and his Nazi party did use the symbol, but that doesn’t make it his.

So whose swastika is it?

First, let us tell you what the word means. Swastik/Swastika comes from the Sanskrit 'su' meaning 'good' and 'asti' meaning 'to be'. So basically, it stands for well-being. We put it on our new possessions so that they work well and bring us prosperity. Pretty harmless and all good. Till now.

The word is over 6,000 years old and was found in the Vedas much before Hitler existed on the face of earth. But Hitler happened to steal the symbol because it helped him believe that he was 'pure'. It is the oldest symbol Hitler and his henchmen could dig up; so when they found one, they made it theirs. But just because Hitler liked it and used it at some point, shouldn’t make us hate it, right? Hitler died 74 years ago. His party, his ideology and his evils died with him (good riddance, that).

But the Swastika lives. Let it live. If you want to dig in and see exactly why the Swastika has suddenly hijacked your social media and WhatsApp, read this.

Oh, hold on! Read that after we tell you why Jeff Bezos is on an India trip worse than Canadian Prime Minister Justin Trudeau’s 2018 one. Now, Trudeau had a tough time in India because of his alleged proximity to people believed to be Khalistan sympathisers.

But we should have first told you who is Bezos. Boy! He is the richest man on the face of earth. The Amazon founder held on to the top spot with an estimated net worth of $115 billion. In US dollars, that figure has nine zeroes after 115. Wait, let's give you a numerical figure - 115,000,000,000. Now, should we convert that into Indian rupees? Let's. This is what that (imaginary, at least to us) figure looks like: Rs 81,74,02,75,00,000! Not even going into imagining what that kind of money feels like.

Now poor Bezos. His money and his zeroes are all with him, but none of it was enough for him to get a warm welcome from the Indian administration. Union minister for commerce and railways Piyush Goyal said on Thursday that it's not as if they are doing a great favour to India when they invest a billion dollars. By they, Goyal meant Amazon.

Today, Goyal said what they say when caught on the wrong foot — that he was quoted out of context. The context, you see, is every politician's safe refuge. The context is defenceless.

Goyal had blamed the same context after everyone had a good laugh at his expense: he had said Einstein discovered gravity (Newton did, just by the way). Listen to this:

#WATCH Union Minister Piyush Goyal's clarification on his recent comments: The comment that I made had a certain context. Unfortunately some friends have sought to remove the context, pickup one line and create a very mischievous narrative. pic.twitter.com/bzugSwSTyi

Anyway, we were telling you about why Bezos has so far not even gotten to meet Prime Minister Narendra Modi. The answer apparently lies in what The Washington Post has been publishing about Modi and his government. The newspaper is owned by Bezos and has been critical of the Modi administration (you must remember some of those headlines; if not, see this; this and this).

Now, US President Donald Trump and a friend of our PM Narendra Modi had squarely blamed Bezos for The Washington Post's coverage of India, Modi and his administration. But then, the Amazon boss said that he is not involved in deciding the paper’s content.

And Bezos’s problems could also mean trouble for us. Why? Discounts! We hear that the Competition Commission of India has ordered a probe against Amazon and Flipkart over these very discounts, exclusive brand launches online and the partialty they have shown for certain mobile-phone sellers.

Many say that this has been done with an eye on the Delhi elections, where the traders are a major BJP vote bank. Traders have been complaining about Amazon and Flipkart snatching their businesses and hitting them hard for quite some time now. But what to do. Those discounts are addictive. We all love them, don’t we?

Will Bezos be caught in this Great Indian Bhoolbhulaiya? Well, he can fall back on King Khan for an answer to that!

We leave with that for the weekend. Be back on Monday and that will be no normal Monday but a Blue Monday (no, we didn't mistype Monday Blues)! So what’s that?

Also read: DailyOh! Why Cuttack train accident takes us to a 1975 killing to how a demon made it to Canada’s dollars