A ridiculous trip. And now, an inverted map of India. The joke is honestly on Canada's PM.

We get it! Canada’s parliamentary Press Gallery dinner is an annual opportunity for the country's political leaders to show their funny side. This is a chance to mock at everyone's mistakes, including their own.

But, Justin Trudeau, could you have not done it without showing an inverted map of India? Several jokes — many were self-deprecating too — were lined up to convey the message that his India visit was a topsy-turvy one. But the moment a prime minister agrees to present a slide show, which begins with an inverted map of another country, the joke is only on him.

Is this sweet revenge?

In a stark departure from how Justin Trudeau is generally received in other countries, Trudeau’s first India visit was marked by indifference. The undercurrent of indifference became visible when he was received by the minister of state for agriculture, Gajendra Shekhawat, instead of Prime Minister Narendra Modi.

But who is to blame if the eight-day visit only had half a day’s business scheduled? Unlike other diplomatic visits, Trudeau’s India outing came across as more like a family vacation, as he sauntered from the Taj Mahal to the Golden Temple and the Sabarmati Ashram for days, resembling an exotic package tour, and only meeting Modi finally on day six.

Modi’s silence on social media about Trudeau's trip, alongside the absence of senior government officials accompanying Trudeau, impressed the international media enough to term this a “royal snub”, hinting at India’s disapproval of the Canadian government’s dalliance with pro-Khalistani leaders.

But is this how you take sweet revenge? By putting the same country’s map upside down in front of the world, while purportedly trying to mock your own failed visit? That doesn't seem diplomatic at all! Given the diplomatic disaster the trip actually was — numerous commentators pointing this out — one would think Trudeau woud be more careful now.

And this ladies and gentlemen is Canada's prime minister. His office blames India for his misfortunes; I however suggest 'gaanja' did it. pic.twitter.com/P9ZvYMEN6d

Is it just me or is this choreographed cuteness all just a bit much now? Also FYI we Indians don’t dress like this every day sir, not even in Bollywood. pic.twitter.com/xqAqfPnRoZ The Trudeau visit was overlooked by most, except by eager cameras

Mocking at how his India visit made headlines only for his sartorial styling (or, the overdose of it), Trudeau also presented a photo of his meeting with Salil Parekh, the Infosys CEO. “But it was not reported, as I was wearing a shirt and a tie… boring.” Of course, his clothes made headlines for his apparent notions that Indians dress like that all the time. Trudeau was mercilessly trolled, which might not be entirely justified. But again, such a blowback was part of a Twitter frenzy over him - not a concerted message sent out from an official institution, unlike his recent remarks summing up his own India trip.

Comparing the visit with “ripping off a band-aid”, he said the visit was aimed at strengthening “people-to-people” ties and generate investments. But it was the “beginning of the end”, the “trip to end all trips.”

Honestly, Trudeau sounds like a spoilt child. If overshadowing all Bollywood personas with over-the-top sherwanis, and dancing bhangra and thus going viral on social media for “choreographed cuteness” isn't enough for people-to-people connect, we don’t know what more he wanted. Also, two-way investment deals worth $1 billion covering a range of sectors, from natural health care products to artificial intelligence, were signed. Clearly, serious business was concluded over the visit, despite those golden kameezes and dazzling dance moves. 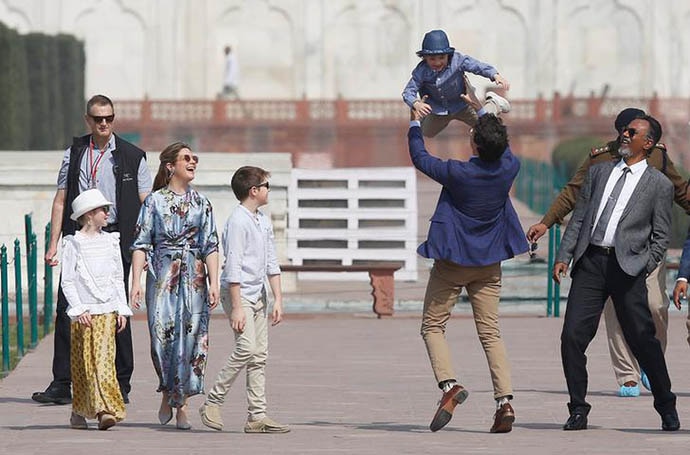 What a fun holiday - sorry - diplomatic visit that was! Feeling a tad drab? But some business was also concluded during Justin Trudeau's India visit

Cropping out the 'K' word

The dressing was only part of the problem though. A photo of Sophie Gregoire, Trudeau’s wife, with Jaspal Atwal, a former member of an illegal Sikh separatist group, also surfaced during the visit. Atwal had been invited to an event at the High Commission of Canada in India. It was a mistake, the Canadian part later admitted, and the invitation was rescinded. But not before raising a legitimate question over how Atwal could get a visa to travel to India.

But how do you skirt the Khalistani issue in your shame-India pout-trip? You crop out Jaspal — and then marvel at the beautiful dress Sophie was wearing. The moment, as Trudeau said, when Hadrien had given up on the India tour. We, too, now give up!

Who is to blame if Canada's media isn’t impressed!

What’s the fault of India if Trudeau's visit exposed him to criticism back home for squandering public money? It’s not India's fault if the international media halted its love fest over Trudeau and sharply criticised his diplomatic visit to India, or the lack of it. “Okay, our prime minister’s Bollywood debut is over. As Rotten Tomatoes would likely agree if it were to review the performance as if it were a movie, it was a colossal flop. Over-the-top, over-scripted, and unctuous in its delivery,” this is how Toronto Sun commended on his visit.

Trudeau could have let things simply quieten down. But his own attempts to again highlight his India trip — and seemingly mock himself — have only stirred up the hornet's nest again.

#Narendra Modi, #Foreign relations, #Canada, #Justin Trudeau
The views and opinions expressed in this article are those of the authors and do not necessarily reflect the official policy or position of DailyO.in or the India Today Group. The writers are solely responsible for any claims arising out of the contents of this article.