5 reasons why BJP will win Karnataka

With results for Karnataka Assembly election a couple of days away, all three major players are claiming victory. While the incumbent Congress seeks to retain power in the southern state, Deve Gowda-led Janata Dal Secular (JDS) hopes to form the government on its own after 10 years. The Bharatiya Janata Party (BJP) has put in its might and machinery to wrest power from the Congress after five years. 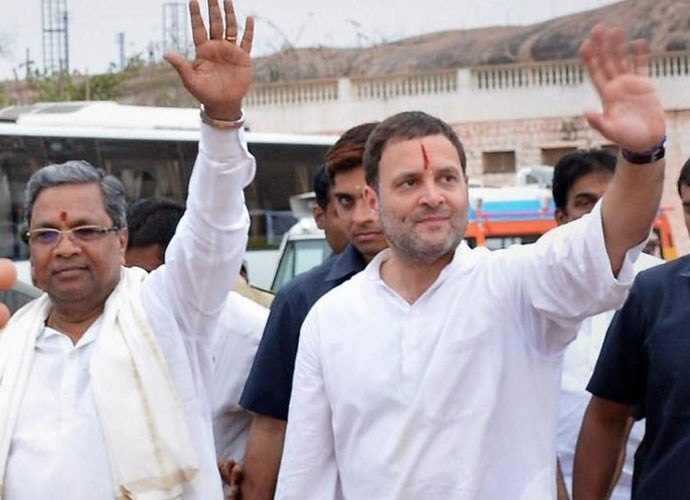 Though the JDS is talking about returning to power, even it would have realised by now that the real contest in Karnataka is between the ruling Congress and the BJP.

Between the BJP and the Congress, the campaigning of the former was more aggressive and effective. These are the five reasons why the BJP may have an edge in the Karnataka election.

Prime Minister Narendra Modi has proved to be the BJP's trump card in all Assembly elections, except Delhi and Bihar, since 2014 Lok Sabha polls. He has been credited with pulling off victory in one state after another.It is generally believed that the BJP would have lost the December 2017 Gujarat Assembly election had Modi not put in his heart and soul into the campaign process.

Though BJP president Amit Shah, who also belongs to Gujarat, had announced "Mission 150" for the 182-member Assembly, the party could win just 99 seats, only eight more than the halfway mark. If the BJP managed to just scrape through, the credit goes to Modi.

In Karnataka too, the BJP's campaign caught momentum after Modi started campaigning from May 1. According to the initial plan, he was to address 15 public rallies. With the BJP not ready to take any chances, the plan was modified and Modi addressed 21 rallies.

The BJP as a cadre-based organisation is considered to be more organised than the Congress. It has a well-oiled election machinery from the booth level right to the top. The party also gets the support of the committed cadre of its parent organisation Rashtriya Swayamsevak Sangh (RSS).

Shah's political acumen has now been proven beyond doubt. He is known for micro-managing elections. He has his strategy set down to the booth level. No wonder, he is also known as BJP's election machine. Karnataka chief minister Siddaramaiah is facing an anti-incumbency in the state. He is accused of playing divisive politics. He has been criticised of pandering to Kannada pride and trying to indulge in caste politics and minority appeasement.

Declaring Lingayat as a separate religion, granting members of the community a separate flag and anthem for Karnataka and observing Tipu Sultan's birth anniversary have been among his moves to please castes and communities.

But this may not be sufficient to help the Congress in the long run because it has the potential to antagonise the other communities who would be feeling alienated.

The Congress president is yet to establish his credential as a winning campaigner like Modi, who has the ability to turn an election around. Starting from Gujarat election, Rahul Gandhi started banking upon negative politics. Instead of spelling out the Congress' plan for development in Karnataka, he was seen attacking the BJP, particularly Modi, Shah and the party's chief ministerial candidate BS Yeddyurappa.

The public rallies of Modi were charged and saw a responsive audience. Shah's roadshows also attracted large crowds. On the other hand, at several places, Rahul's roadshows wore a deserted look. His rallies also brought in more of monologues unlike those of Modi that made a bit to engage the audience. Rahul declared himself the Congress' prime ministerial candidate for the 2019 Lok Sabha elections just four days ahead of Karnataka going to polls to elevate his stature in the eyes of the voters.

He wishes to be treated at par with Modi. However, he hardly has any claim to fame except dynasty. His campaigning may fail to make any difference to the final results in the state. Worse, it may harm the Congress' chances of winning.

A bipolar contest in Karnataka would have helped the Congress. However, a three-cornered election is likely to benefit the BJP.

The JDS is likely to eat into the votes of the Congress, whereas, the BJP's share of votes is likely to remain intact. The anti-incumbency votes will get divided between the JDS and the BJP. That will only harm the Congress.

Karnataka has witnessed alternate transfer of power between the Congress and the rival parties for the past 35 years since 1983. The Congress does not appear to be in a position to break that jinx. With the JDS not in a position to a present itself as a strong contender, it is going to be advantage BJP in Karnataka when results are declared on May 15.

#Rahul Gandhi, #Narendra Modi, #Karnataka election results, #Karnataka elections
The views and opinions expressed in this article are those of the authors and do not necessarily reflect the official policy or position of DailyO.in or the India Today Group. The writers are solely responsible for any claims arising out of the contents of this article.