The outcasts of Kashmir: Why no one wants to talk about the residents of Sheikh Colony

Leaning against a wooden plank that supports her small makeshift tin shop on a roadside perch, a weather-beaten Moagli Begum sighs deeply as she narrates tale. “I, along with my daughter and son-in-law, shifted to this colony 12 years ago, and that was perhaps our biggest mistake.”

Moagli’s family is among the 500-odd families that live in Sheikh Colony, an area on the periphery of the historic old city of Srinagar. In the vicinity of revered Sufi saint Sheikh Hamza Makhdoom’s shrine, the area over the years has become a ghetto for people working as sweepers in the local municipality.

“We are being treated like outcasts, as if we have been created by a different God who is inferior to Allah. People consider us as second-grade citizens. Some even don’t shake hands with us. Yes, we do menial jobs, but don’t we clean their mess only?” asks Moagli, adding that she fears that her grandchildren may never get good marriage proposals despite being well-educated — a concern which quite clearly is shared by most residents of the area. 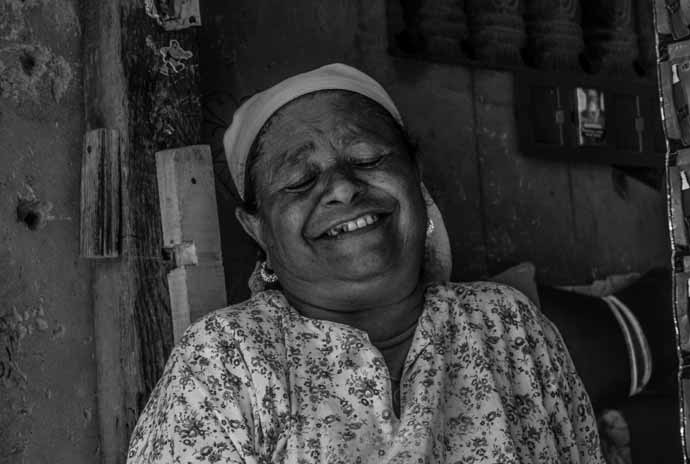 Moagli Begum's family is among the 500-odd families that live in Sheikh Colony. [Photo by Affan Qadri]

Listening to our conversation from a distance, a middle-aged man walks towards Moagli’s shop. Reaching out for the matchbox tied with a thread hanging from a nail, he lights up his cigarette and joins the conversation. Taking a nonchalant puff, he finally says: “I don’t know of a single case where a boy or girl from our neighbourhood has married outside the community. People from the so-called 'upper' castes don’t prefer to socialise with us, so there is no question of marrying."

The caste system in the subcontinent dates back to the Vedic times and this rigid social stratification based on occupation was strictly followed in Kashmir till Sayyid Sharafuddin, a Sufi preacher commonly known as Bulbul Shah, introduced Islam. “Until the 14th century, there used to be separate localities far away from towns or local settlements called Watalpurs, which housed people indulging in menial jobs. After Islam gained ground in the Valley, even though the caste system was abolished, it didn’t get wiped out from the minds of people. The present-day Sheikh Colony is more or less a manifestation of the same Watalpurs," says Dr Afaq Aziz, faculty at Centre of Central Asian Studies (CCAS), University of Kashmir.

The term Watalpur is, in fact, derogatory in nature, derived from "Watal", which refers to people associated with sweeping, cleaning or a cobbler's job. Picking up the pieces and moving on with life at Sheikh Colony. [Photo by Affan Qadri]

Further diluting the caste system, which prevailed in one or the other form even after Bulbul Shah’s preaching of Islam, Sultan Shahubudin — a local ruler — in the 15th century decided to bestow the title of Sheikh — a very "high" caste — to the "Watals".

However, change in parlance garnered little social change. “The upper castes used Sheikh as a prefix clearly differentiating them from Watals who used it as a suffix. It was a clear indication of the fact that the 'upper class' didn't like the change — something which ensured that even seven centuries after the spread of Islam in Kashmir, caste remains a relevant, if not dominant, social factor in our day to day lives,” says Aziz.

While social stratification and hierarchies may not have led to any violent repercussions in Kashmir, the fault lines are quite discernible. “We can’t imagine living out of this place. It is impossible for us financially as well as socially. I have lived here for 40 years, bore four children. Even they are married now. My life is confined to this one-km stretch (this colony) and I know I would die someday here only," says Saleema, 65. 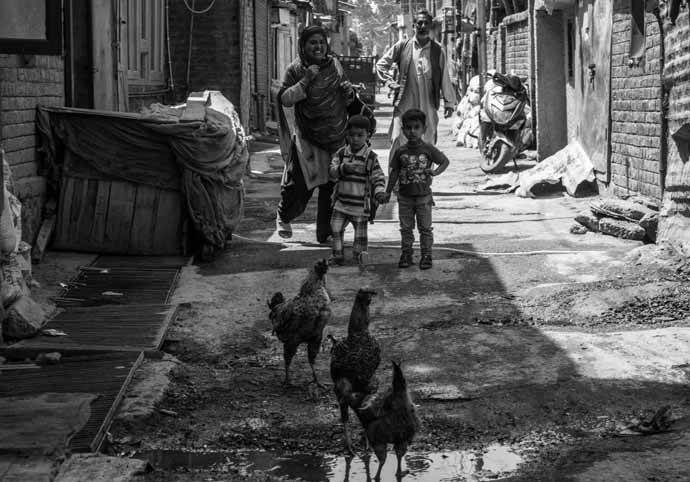 The outcasts: Sheikh Colony and its residents. [Photo by Affan Qadri]

“I wish the next generations don’t have to endure the same discrimination which we faced and are still facing. But knowing the mindset of the people, I know chances for such a change are bleak," she adds.

Even though many from the community, braving all odds, have pursued education to become first generation learners, that has hardly changed the people's attutude towards them.

Cleaning the pavements near the historic Jama Masjid in Downtown Srinagar, 35-year-old Mumtaz Ahmed, a graduate in humanities, laments being born to a family of sweepers.  “We are being discriminated at every place and at all levels. The only place where there is no discrimination is the mosque. Everywhere else, people look down on us,” he says, with a tinge of exasperation clearly visible in his eyes.

Sadly, an overwhelming majority in Kashmir doesn't accept the fact that caste-based discrimination still prevails in society. That Moaglis, Saleemas and Mumtazs live amid them, and yet so far away.