Kerala floods: How rescue operations to save dogs, cows, goats are melting hearts

Various welfare organisations and individuals have joined hands to ensure food and safe spaces for animals.

In 2017, the Kaziranga National Park in Assam lost 361 animals, including 31 rhinos, in floods that swamped the UNESCO World Heritage site. Torrential rain triggered heavy flooding twice in 2017, straddling the Brahmaputra floodplains and Burha Pahar hills. The park also lost nine elephants as the Brahmaputra breached its banks and inundated large tracts of the foothills. Kaziranga is a national park and that is why numbers are put to animals that perish in natural disasters.

In Kerala, we may never know just how many died — yet the efforts being made to rescue stranded animals are encouraging.

Heart-warming stories are emerging from Kerala about how many got together to ensure animals were carried to safer locations and provided with care.

When a tragedy of the scale that has hit Kerala strikes, many consider it insensitive to talk about rescuing animals because human lives take precedence. 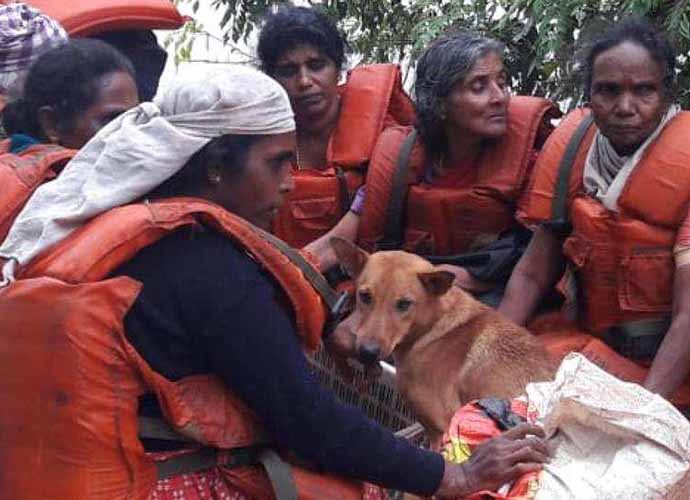 Not just a dog's life: A rescue operation to save a canine at Orapally Village, Mananthavady Taluk, Kerala. (Picture courtesy: NDRF/Twitter)

A woman in the state refused to leave her house when the rescue teams arrived offering to move her to a safer location. Sunitha was stuck in her house in Thrissur, one of the worst-hit districts in Kerala. But she refused to leave the building unless her dogs, all strays or abandoned pets, were taken too. 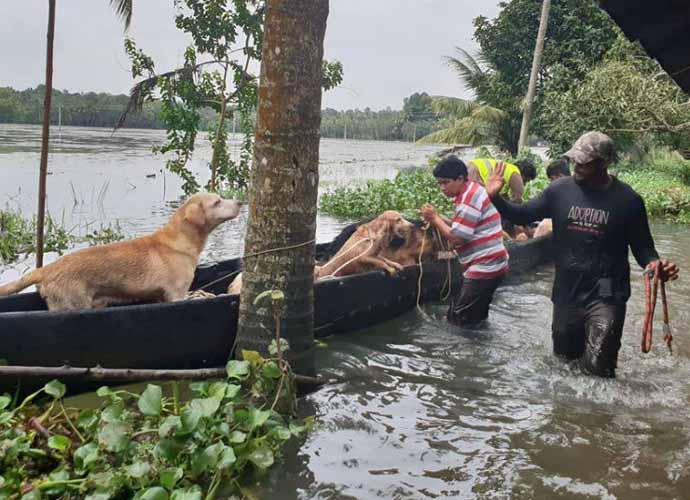 Yes, we're all going: Dogs being taken to a safer location in Kerala. (Source: Twitter)

Sunitha eventually sent the rescuers back since they couldn't evacuate her dogs.

When an animal welfare group, the Humane Society International (HSI India), arrived for a last-gasp rescue, it found the dogs cowering on the beds as the house was flooded and the water level was rising dangerously.

In one of those good news stories that completely melt our hearts in the middle of huge tragedies, the dogs, and their owner, Sunitha, were rescued in the nick of time.

Sally Varma of HSI India says the group is trying to raise funds to build a kennel for the dogs to stay at once the flood water recedes because there are no relief camps for animals. HSI India is also carrying out advocacy work, requesting people to not leave their animals tied-up, caged or in closed rooms. The organisation has asked people to leave a tag on the collars of pets with a contact person's name and mobile number.

Don't leave your #pets tied, caged or in closed rooms. If allowed please don't leave your pets behind. Remember to leave a tag on the collar with a contact person’s name & mobile number, written with a permanent marker. Contact Us @+918943322808. #KeralaFloodRelief #animalrescue pic.twitter.com/xOYqt10Exz

Individuals too at their own level are trying to do whatever they can to help.

That Love❤😘 Helping all ❤ frm kerala.Keep it up boys and go on and save yourself too.if we r living here we want dogs cats and others otherwise life is blank.their love can't calculate @Suriya_offl @selvaraghavan @anavenkat @Mohanlal @VigneshShivN @Karthi_Offl @sachin_rt pic.twitter.com/OVVEq0UvfJ

Shruthi V Nithin from the pet company FLOAP (For Love of All Pets) said there are several people who want to help animals, but don't know how to, which is where groups like hers come into the picture. As there are no relief camps for animals, Nithin said, many students in Trivandrum and Ernakulam are fostering animals. FLOAP has also reached out to HAL to air-drop food and other essentials for animals.

On August 19, FLOAP volunteers reportedly rescued a family along with six pregnant cows. A tempo was arranged to ensure the cows were dropped at a safe location 60 kms away since they couldn't have walked that long.

Toni Freer, of Haven Animal Welfare Trust, said the organisation has rescued dogs, chickens, goats, rabbits, snakes and cows so far. The organisation is working in association with the Kerala Forest Department to treat baby elephants. Groups like Bengaluru-based Cuddly Collars are acting as mediators between the public and organisations such as the HSI India because the latter does not accept money from people. So, when people donate, Cuddly Collars buys the essentials that animals need and passes it on to HSI to be distributed.

PETA India is supporting the relief efforts of Animal Rahat, a Maharashtra-based organisation trained in animal emergencies and veterinary services.

The extent of the harm caused to animals in Kerala's wildlife's sanctuaries is not yet known, but some of the pictures and videos that have emerged paint a truly horrid picture and indicate that once the water recedes, a devastating scene may emerge.

There are grave stories of how many snakes, carried by the flood waters into neighbourhoods, are being killed simply because people are scared of them. The fact is, the snakes are terribly scared too.

Getting lots of photos from people in Kerala of this species of snake taking shelter in homes. The Common/Banded Kukri is non-venomous and gentle. Let them be. #KeralaSOS pic.twitter.com/cjl4Gf8rer

Lots of people DMing me pictures of snakes in the #KeralaFloods. Quick tips you can pass on to your friends/relatives if you wish: pic.twitter.com/v9ajUfpi3e

Helplines have been set up to ensure people reach out on spotting a snake instead of simply killing them.

Efforts are being made to save animals with many risking their lives in these extremely hard times to do so. These attempts are testimony to the simple fact that the world is not such a bad place after all.

Post your comment
#Natural calamity, #Kerala animals rescue, #Kerala rescue operations, #Kerala floods
The views and opinions expressed in this article are those of the authors and do not necessarily reflect the official policy or position of DailyO.in or the India Today Group. The writers are solely responsible for any claims arising out of the contents of this article.