What Kerala and its people need and deserve at the moment is immediate help.

The aftermath of a disaster is often focused on getting back to normal life. But there is a bigger 'disaster' that is perennially playing out in India — politics.

Even as Kerala faces the humongous task of rehabilitating its people and rebuilding the state following the unprecedented floods and landslides that have caused colossal loss of life and property, a huge debate has broken out over whether Kerala floods qualify to be declared a national disaster or not.

Another issue that has been caught in a furious debate is whether the Centre should accept the aid of Rs 700 crore offered by the United Arab Emirates (UAE) to Kerala towards it relief funds.

According to various news reports, the Narendra Modi-led BJP government is "unlikely to accept the offer over tax issues and a policy put in the place by the Congress Party-led United Progressive Alliance (UPA) in 2004". India reportedly has not taken aid from any nation since 2007 and the policy is unlikely to change now. (Credit: PTI photo)

The government reportedly has taken the decision to rely solely on domestic efforts to tackle the situation, as it feels it has the "wherewithal to deal with the calamity". However, the final decision will be taken by the Ministry of External Affairs (MEA). The ministry, however, has said that it hasn't got any offer or proposal yet.

Sheikh Mohammed Bin Zayed Al Nahyan, the crown prince of Abu Dhabi, reportedly called up Prime Minister Modi and made the offer for assistance. The government of Maldives has also also decided to donate $50,000 for the flood-affected people of Kerala. It is understood that the UN is also offering some assistance for Kerala. In another development, an ambassador from Thailand reportedly has said that India has made it clear that it would not accept international aid for flood relief in Kerala.

Coming back to the debate over whether or not to accept aid from any other country, India reportedly has not taken aid from any nation or multinational organisation since 2007 and the policy is unlikely to change now, sources claim. The Centre had apparently declined foreign aid offers even during the floods in Uttarakhand and Kashmir.

Former MEA spokesperson Syed Akbaruddin had said after the 2013 Uttarakhand floods that India had declined Russia’s offer of help as India has the adequate ability to deal with any emergencies.

However, the decision to accept or decline UAE’s offer has already become a thorny issue. Kerala Chief Minister Pinarayi  Vijayan has in a series of tweets earlier expressed his gratitude to the UAE for the offer. 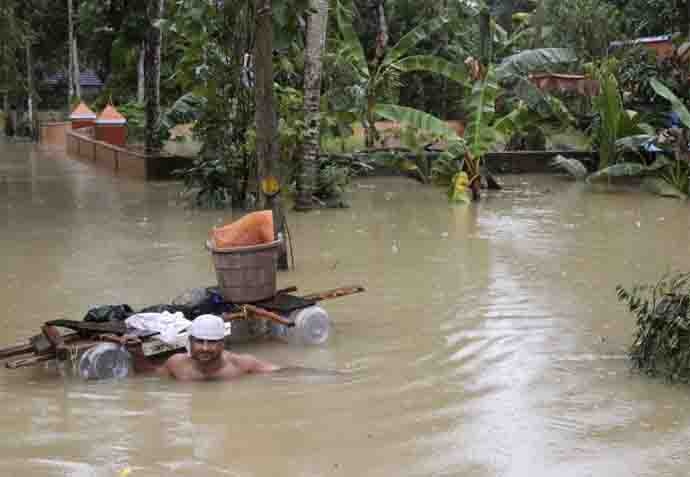 The governments — both Centre and state — must ensure timely relief and rehabilitation to the flood-ravaged people. (Credit: PTI photo)

“The state has a privileged relationship with the UAE. It is like a second country for the Kerala  community, and we express our thanks and appreciation to the brotherly state of the United Arab  Emirates for this support,” he said in one of his tweets.

Kerala has sought a Rs 2,600 crore special package from the Centre for the massive rebuilding exercise. The central government has so far released Rs 600 crore. The chief minister had earlier said the state had suffered damages of about Rs 20,000 crore.

Meanwhile, Kerala Finance Minister Thomas  Issac said the Centre's financial package for Kerala may fall far below requirement and it should not deny others a chance to help the flood-hit state. The Kerala minister told this to NDTV in an interview.

But others argue that India has "refused all bilateral aid for disaster as its economy grew, marking a new era of self-reliance". India did not even accept bilateral aid after the devastating tsunami in 2004, or the flash flood in Uttarakhand. After the tsunami, then Prime Minister Manmohan Singh had said, "We feel that we can cope with the situation on our own and we will take their help if needed."

According to this Indian Express report, there are two reasons for such a policy. The news report quoted unnamed source as saying: “Firstly, the governments since then have felt that India has the capacity to handle disasters like these. And secondly, accepting from any one government opens the floodgates for others as well, and it would be diplomatically difficult to refuse from some while accepting from others.”

This policy is, however, limited to foreign governments, and does not extend to individuals and charity organisations.

“It is not possible to curtail aid from NRIs in foreign countries or NGOs working in the disaster management sector. Their funds can be accepted through the remittance route,” the source said.

According to the same news report, the government has a standard template to respond to any offer of assistance that has been circulated to all Indian embassies across the world. “The Indian diplomats are expected to express gratitude to foreign government officials and diplomats for their sentiments and offer, but are to be politely told that the government has no requirement as of now, but will let them know — if and when the need arises,” the Indian official said.

Standard templates and government protocols notwithstanding, what Kerala and its people need and deserve at the moment is immediate help. The governments — both Centre and state — must ensure timely relief and rehabilitation to the flood-ravaged people.

Politics over relief work is the worst crisis to befall a nation.