Khadija Siddiqi was stabbed 23 times. Her story is far from over

It was just another hot, nondescript, bright summer day. Davis Road, one of the busiest commercial roads in Lahore, hissed with the noise of vehicles, incessant honking and aimless chatter of pedestrians, unhurried in their eagerness to reach nowhere. A car was parked outside the Ambassador Hotel, a Davis Road icon of bygone glory, the driver waiting inside the vehicle like he did every day. At about 2pm, a young woman, holding the hand of her six-year-old sister, whom she had picked up from the nearby Convent of Jesus and Mary, her old alma mater, opened the car door. This was the road that was as familiar to her as the neighbourhood where she grew up. The walk to and back from the school to the car was a part of her childhood, and now that of her little sister.

While she watched her sister get in the back seat, with one foot inside the car, suddenly she felt an unfamiliarly agonising sensation in her nape. She had been stabbed with a knife. And as she screamed, shocked, in indescribable pain, unable to make sense of what had happened, she was stabbed again. And again. And again. In her neck, on her back, on her arm. She was stabbed 23 times in a matter of seconds. She was 21 years old. She survived.

This is the story of Khadija Siddiqi, 23, a final year law student, a young woman who survived the kind of brutal attack on her life that has left, in her own words, a “calligraphy of stiches” on her arm and neck. What happened to her is the kind of stuff you watch, in horror and disbelief, in a film with your eyes glued to the screen, your eyes tear-filled, your chest in a grip. Khadija, today, courageous and confident, her lovely face radiating serenity, her dimpled smile accentuating her inner strength and her youthful positivity, awaits the final hearing of her case on Monday, May 28, 2018.

The final hearing may just turn into another date for postponement of a legal decision. Court cases have a way of dragging on interminably in a country in which the law is a trifle, investigations often incomplete and partisan, trials mostly a mockery of the very essence of justice, and many sentences that demean the pain of the victim and his or her family. She has to do it for all those victims of violence who never got justice (Photo: Twitter)

Khadija was attacked by a man whose face was covered by a helmet. The attacker was not some random man who in a psychotic, sociopathic breakdown decided to unleash barbarity. Khadija’s attacker was her class-fellow, someone she had known and had been friends with, until she wasn’t.

Tired of his behaviour, she stopped being friends with him, and for a year, her only interaction with him was a distant silence. For reasons unknown to me, something of no interest to me, and which I feel are absolutely inconsequential as to why they in the mind of her attacker became the trigger, Khadija became a target. Obsessive, persistent, in pursuit of his prey, in a single-minded undertaking to destroy her, he waited in shadows for a chance to harm her fatally. He was 21 years old, was and is a law student – the irony is staggering – and the son of an influential lawyer. His name is Shah Hussain. He is 23 years old now.

The intent was very clearly to kill Khadija: you don’t stab someone in the neck and back 23 times just to inflict pain, create terror or to prove a point. In his mind: I am a man in the patriarchal, male-dominated world of Pakistan, and I can get away with, literally, murder.

The reason could be any, the word “honour” could be the pretext; a woman “wrongs” me, “angers” me, “ignores” me, “snubs” me, doesn’t want anything to do with me, has moved on with her life, is happy without my companionship, my friendship, my presence, so how the hell does she think I’d let her exist in peace? Misogyny permeates the air he breathes, the world he inhabits comes darkened with bricks of “women are second class citizens with no rights”, “women do not have the emotional or physical strength to fight the injustice done to them,” “women cannot have a mind of their own”, “women must act within the societal parameters that define how to be.”

Khadija survived that day in May because of the intervention of her driver, Riaz Ahmed, who after initially having gone motionless as he witnessed a display of barbarism, managed to push the assailant off Khadija who was almost unconscious after so many stabs. Her younger sister, terrified, wailing, tried to help her sister, and was also stabbed. Mercifully, the wound was superficial.

The assailant after his scuffle with the driver ran away. What happened before he managed to escape, his clothes soaked in Khadija’s blood, the bloodied knife in his hand, was that his helmet fell in the car exposing his face. Khadija because of being in a state of unconsciousness could only name him after four or five days in her statement to the police. He wasn’t arrested until many days later. His father, unrepentant and unperturbed by his son’s murderous “nothing”, had arranged a pre-arrest bail.

The trial started, and shenanigans to have Hussain freed started in the name of legalities. A year of court hearings, dedication of her lawyers, support from media and later from some political parties, the trial saw a young woman, still in pain of her physical wounds, suffering endless harassment and persecution in the guise of the accused’s defence. While no apology came from the accused or his family, a great deal of pressure was exerted on Khadija and her family to end the case. Khadija remained resolute. And a year later, on July 29, 2017, Hussain was sentenced for seven years, the minimum punishment in a case of an attempted murder. 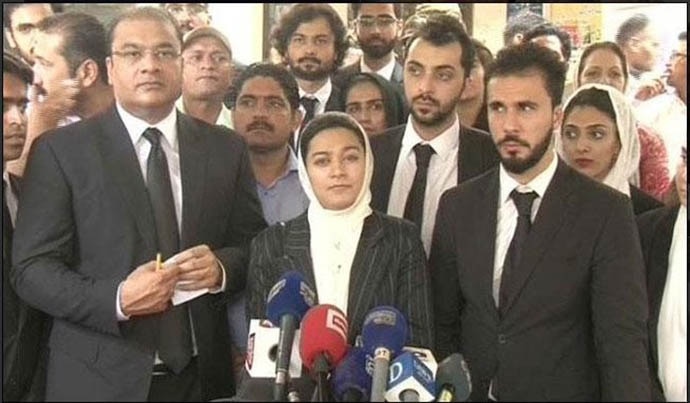 This is Khadija’s fight, and she has to take it to the end. (Photo: Twitter)

Imprisoned in the Kot Lakhpat Jail, Lahore, with his father and his faithful coterie of lawyers – comrades who would leave no stone unturned to have the very concept of justice lynched beyond recognition – the scales of justice were made to tilt in his favour, again. A session court reduced his already minimum sentence to five years, and Khadija despite being mortified, is fighting the verdict.

Appeals from both sides are being heard in the Lahore High Court, and the Monday hearing will decide: would the man who intended to kill a woman in broad daylight serve the reduced version of the minimum sentence because the law favours those who can pull strings, exert pressure, justify homicidal attacks in the name of God-knows-what, highlighting unfairness of society where justice for women is as elusive as the dream of a world where violence is an exception, a rarity, not an everyday occurrence?

In May 2018, Khadija – after two surgeries; weeks of hospitalisation; unimaginable pain in her young body; so many stab wounds that her stitches, she says, run like “a crossword puzzle, going back and forth”; her right arm still out of shape, and hurts beyond words when she writes under pressure in an exam; her backbone, damaged in the attack, has excruciating pain at times – is still scarred. Her scars have become her strength. What remains unaltered: her never-say-die attitude, her indefatigable spirit, her 500-watt smile.

This is a young woman who is empowered by the inexhaustible support of her team of fabulous lawyers headed by Barristers Salman Safdar and Hassan Niazi, her legions of supporters through social media, activists like Jibran Nasir who constantly stand by her, TV anchors like Maria Memon of ARY and Shahzeb Khanzada of Geo who keep her story alive, will never let anything stand in her pursuit of justice. Khadija has to do it for herself. And she has to do it for all those victims of violence who never got justice. She is fighting a battle for all those nameless, faceless victims who were silenced by the system.

Khadija’s story, Khadija’s mission: “It has been a tough journey. A long one. It still continues. I need to do it: take it to the end. I won’t ever give up.”

Haunted by her ordeal, deeply pained by the unfairness of it all, angered at the system, and uplifted by her unflinching perseverance despite all odds, I pray for Khadija, and all other victims of violence: may you all win.

May the best of humanity win.

Also read: How Indians and Pakistanis trolled me on Twitter

#Law, #Justice, #Khadija, #Pakistan
The views and opinions expressed in this article are those of the authors and do not necessarily reflect the official policy or position of DailyO.in or the India Today Group. The writers are solely responsible for any claims arising out of the contents of this article.