DailyOh! Who are Kim Jong-un’s kids, to why IMD is asking us to stay indoors from 1 pm to 5 pm

Kim Jong-un’s eldest is believed to be a son. But he himself wasn’t the eldest son of Kim Jong-il. Why then did he get to rule North Korea over his brother?

Over 1,45,000 people have tested positive for the coronavirus in India. Now, cases are bound to rise because viruses like to spread; this coronavirus, more so. The problem lies in the rate of the rise. So far, the government said India’s positivity rate was slow so it did not need to intensify testing further. Guess who took that as a challenge? The positivity rate. To put it roughly, positivity rate is the number of people who test positive per 100 tests. Over the last two weeks, that rate has risen to about 4.5 per cent in India. The positivity rate in India is rising steadily. (Photo: Reuters)

So what changed between April 16 and May 23? Restrictions and testing. Restrictions were eased and testing was intensified. Many say India will reach its peak in June-July as restrictions are eased further. We will leave that to June and July. Aviation Minister Hardeep Singh Puri has, meanwhile, said global flights could start taking off and landing in India by August-September. But domestic flights started today. You can’t measure confusion but our guess is it definitely was more than the number of flights that took off and landed. Eighty flights got cancelled. Many states at the last minute, which was hours after people had booked their tickets, announced compulsory quarantining of passengers. Who would bear the cost? Well, confusion prevailed on that too.

Are you thinking of booking a flight as well? We suggest wait if you can for the air to clear.

Even as the world remained focused on rising Covid-19 cases, it failed to notice the rising temperature till it became impossible to not notice it. The day-time temperature has crossed 42 degree Celsius. Even if you are not in the red zone, the weatherman has issued a red alert for you. That you is you if you are in Delhi and some other north Indian states. The weatherman’s advice, “Don’t step out between 1-5 pm.”

The IMD says there is a heat wave sweeping north-west India. And if you do not want to be swept away by the wave: stay in. Now, you may say you were not going out anyway because there is nowhere to go, but many have no choice but to keep going.

The question here is what exactly is a heat wave? Yes, it is when you feel too hot to handle but when does IMD say it is so hot that you can’t handle? The temperature is soaring across India. (Photo: Reuters)

If stepping out is unavoidable, take all precautions to beat the heat and the virus on the prowl. For heat, we suggest an umbrella; for the virus, you know, a mask.

But guess who forgot his mask on Monday? MP Manoj Tiwari, who is also the BJP Delhi unit chief. Thinking Delhi being a 100 per cent red zone, is unsafe, Tiwari set out playing cricket in Haryana’s Sonipat. But not only did he forget the mask, Tiwari, a cricket enthusiast, hit social distancing norms straight out of the boundary. 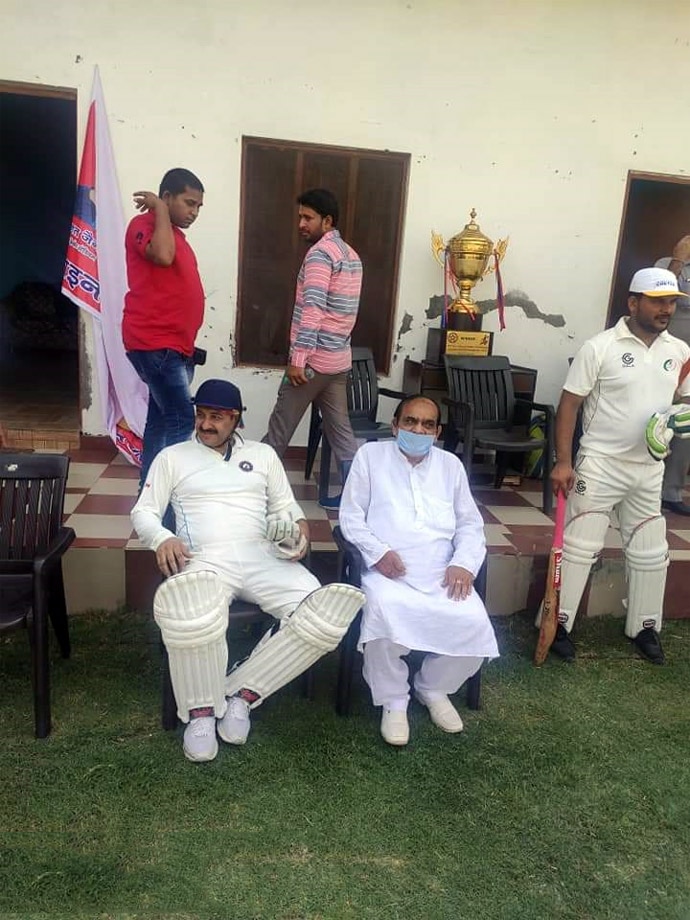 His on-field score is not known at the moment, but his idiocy score is pretty high. MP Manoj Tiwari is our Covidiot Of The Day. Some gentlemen joined the MP in his idiocy on field by dropping the guard down. We mean slipping the mask below the nose. Fools must remember you cannot fool the virus by letting the mask just hang there, not covering the mouth and nose. Politicians did not really disappoint much during the pandemic because we never expected them to not disappoint. Keep your expectation from people low; from politicians, keep them lower.

But one man in India, however, is busy doing what politicians should have been doing. That man is Sonu Sood. For nearly a month now, Sood has been sending people home. As someone said on Twitter, the award for the Best Actor in a Supporting Role goes to Sood.

But why are we suddenly thinking about his kids? That thought occurred while we were thinking of Kim who, according to reports, recently held a meeting to discuss North Korea’s nuclear capabilities.

Ruling Workers’ Party officials wore face masks at the meeting. But Kim did not. He may think why should he fear corona when he has his hands on the nuclear button. No one can tell him that corona doesn’t fear Kim or his nukes because powerful people do not like to be told what they don’t want to hear.

So, as Kim is thinking of bolstering the nuke programme amid stalled talks with the US over the issue, we began thinking what lies ahead for the country after Kim (also given that there's been so much talk of his disappearance and botched surgeries over the past months). So, after Kim, there are Kim’s three children. While the level of secrecy around Kim is such that no one knows their names, it is said the eldest one is a son. So the chances of him succeeding Kim are the highest. But there can be many a slip between the cup and the lip.

Kim himself wasn’t the eldest son of Kim Jong-il. The eldest was Kim Jong Chol. But he did not get to inherit the totalitarian regime because Kim Jong-il found him too effeminate and weak.

Then there was a half-brother too, Kim Jong Nam. Because he was ‘half’, the full right to rule North Korea went to Kim Jong-un.

In 2012, North Korean media announced Kim had married Ri Sol Ju, believed to be a former cheerleader and singer. She may still be singing in her bathroom, but not professionally or in public.

The three kids are believed to be from Ri. How old are they? Well, we don’t even know how old Kim himself is because his age has been hidden, although the world's guess is mid-thirties. Whoever says women hide their age, here’s a challenge for you – go find Kim’s real age. We can leave Kim at that and hope he wouldn’t go ahead with the nuclear programme. The world has had enough for now with corona.

So many of us haven’t met friends we would meet every day at workplaces or over weekends at our places or theirs. Those who are meeting are doing so from a distance. You can replace a handshake for a namaste but there is no replacement for a tight bear hug. The one that is warm and reassuring. The warmth of a hug amid a heat wave? We mean the emotional warmth a hug generates or the one that results in a hug. Well, today also marks Eid in some parts of the world, and how better to celebrate the festival if not hug your friends and close ones? But this year, all of that has been put on hold. But back to hug.

Oxford Dictionary defines the word thus: to put your arms around somebody and hold them tightly, especially to show that you like or love them. A hug is not always comforting. Sometimes when you don’t want to hug, but have to, it can feel like you are being choked. But scientists say a warm hug, one not forced upon you, is a hug that is good for the heart too.

Should you ignore heart health in times of corona? No, because here is how you can hug:

Remember jahan chah hai, wahan raah hai (where there is a will, you can hug your way).

If you are craving to hug someone and be hugged by someone, send them this:

Hope real and healthy hugs come our way soon. On that note, we will say bye but keep drinking water because it’s important to stay hydrated. And go high on that biryani and sewai because it's Eid. Eid Mubarak from us to you!

#Coronavirus, #Sonu sood, #Heatwave, #Kimjongun
The views and opinions expressed in this article are those of the authors and do not necessarily reflect the official policy or position of DailyO.in or the India Today Group. The writers are solely responsible for any claims arising out of the contents of this article.