The answer to why China began eating wild animals lies in its history from 1959 to 1961.

The week ends today and when the next week starts on Monday, many in India would be in air, flying off to their destinations. But tragically at least 107 who were flying in the Pakistan International Airline plane today could not make it to their destination as the plane crashed just minutes before landing in Karachi. The crash happened over a residential area and the plane crash landed on the area so the exact extent of loss to life and property is yet to be ascertained.

A video of the PIA aircraft right before it crashed is being widely shared on social media. Have a look:

Footage of plane before crashing near karachi site area#planecrash pic.twitter.com/uNV88DC4io

Most plane crashes, you know, take place either during takeoff or at landing. In fact, 49 per cent of plane accidents happen during landing or the final descent of planes. And that is why housing societies aren't supposed to be built close to airports. Housing societies in the vicinity of airports also highten the risk of terrorist attacks on airports.

There is a reason why housing societies shouldn't be that close to airports. But who even cares. pic.twitter.com/6EdsG1fTZJ

We hope those who died rest in peace and their families find the strength to deal with the loss.

Losses and accidents can rarely stop people from moving on. Not even coronavirus can do that permanently. Indians will be moving on flight from Monday. We know you know that. But if you thought people, for now, are just desperate to head back home because they got stuck away from home during the lockdown, you are both right and wrong. Some just want to get home. But some are inquiring about flights to travel destinations. SpiceJet owner Ajay Singh says the airline has been flooded with questions about flights to travel destinations.

Just how safe would be the flights? Part of the answer is here in this video from Air India:

How that spans out we would know on Monday, but on Friday, guess who stepped out? Prime Minister Narendra Modi. He stepped out after nearly 3 months, given that the coronavirus has locked everyone in within our homes. The PM took a flight to Kolkata to take an aerial view of the destruction caused by cyclone Amphan in West Bengal and Odisha.

The PM is active on Twitter and Twitter is flooded with videos and photos of what the PM has gone to see in person. But before you blame the PM for indulging in politics of optics, blame Didi for providing the nudge. Yesterday, she said, she would invite the PM to see the extent of damage. With polls in the state set for next year, there was no way Modi could have ignored the nudge.

Modi saw the ravaged buildings and uprooted trees from his helicopter with Mamata Banerjee in company. But what he couldn’t see despite the bird’s eye view is Dada lifting, pulling back and fixing a mango tree.

The mango tree in the house had to be lifted, pulled back and fixed again .. strength at its highest ???????? pic.twitter.com/RGOJeaqFx1

A topless Dada may or may not have been a pleasing sight to all eyes. But who cares? Dada didn’t. Dada didn’t but the man standing next to him in the balcony did. That man was VVS Laxman. Laxman reportedly told Ganguly, “Don’t do it.” Not once but twice. “Don’t do it. Don’t do it.” But Dada did it. When he did it, Harbhajan Singh, who was also in the balcony asked, “What do I do now?” To which Ganguly said, “Tub hi khol de.” By the grace of whoever was responsible for grace that day, Bhajji did not. By the grace of Dada, a mango tree has been saved.

But by the disgraceful behaviour of those in Delhi, a street vendor lost mangoes worth about Rs 30,000. As the vendor was moving his cart, passersby, auto drivers and just about everybody who was around, did away with mangoes kept in 15 crates. Trust Dilliwallahs to loot poor thelewallahs. Looting is a crime under normal circumstances too, but amid the high risk of corona contagion, it is idiocy. These aam chors are our Covidiots Of The Day. They are, in fact, callous Covidiots because business has been slow to the point of non-existent for street vendors. Looting from a man who has been hit doubly by the contagion, should invite heavy penalty on these aam chors. Civilisation must have given Delhi a total miss while it was spreading across the world.

For the moment, we would like to take you another part of the world - China. Ditch your fear of the infection because this would not be a physical visit. This is our-style sit-at-home visit of other countries and continents. In China, the wet market will no longer be selling wild animals for food. The country has imposed a total ban on the practice. Wild animals that have medicinal value will continue to be used for making medicines. Which means the consumption would be indirect. What about pangolins? 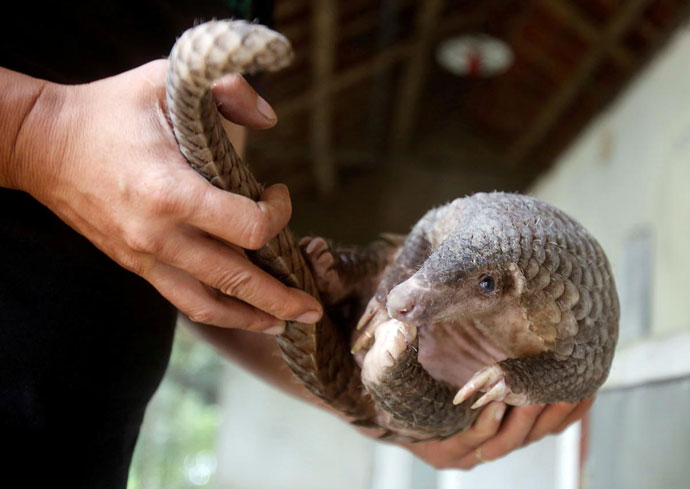 Pangolins, believed to be the intermediary carriers of the coronavirus from bats to humans, are sold in China illegaly. (Photo: Reuters)

Whether pangolins, which are believed to have been the intermediary carriers of the virus from bats to humans, will continue to be used for medicines is not clear. But have you ever wondered why China relies so heavily on wild animals for food? Many in India can ditch chicken and meat the moment they hear the word virus, but why did China continue to sell and buy wild animals even after the coronavirus pandemic? The answer lies in history. Let’s revisit history.

Between 1959 and 1961, widespread famines were witnessed in China. Remember, this was the time when Mao Zedong had rolled out his economic and social programme of Great Leap Forward. These were not ordinary famines. Estimates put the death toll between 16 million and 45 million. Imagine 16-45 million people dying of hunger.

In his push for industrialisation, Mao forced farmers to leave farming and join iron and steel production units. The communist party even outlawed the cultivation of privately owned plots. Farmers were forced to work in communes.

People died in front of granaries. But the government was focused on only the delivery of grain to the grain warehouse. Now, remember the production was falling because of farmers being forced to produce steel and iron. You may be wondering why the communist regime didn’t at least open the grain warehouses. We will answer that. Communist ideology believes private property is the source of all misery. In Communist China, under the Great Leap Forward, even people’s personal pots and pans were taken away and they were forced to eat in community kitchens.

Communism says there must be collectivisation. When there is collectivisation, people are forced to work harder, and thus there is surplus production. Don’t even try finding logic there. Individuals work the hardest for their own selves. Like Mao worked for himself and Xi Jinping is working for himself.

But there was a point to be proven for Mao. So to show surplus production, grains were stocked and not distributed. Grains, in fact, were also exported to prove there was abundant production even as Chinese suffered from hunger.

Hunger is insufferable. The hungry would eat anything to curb the hunger pangs. So did the Chinese under Mao. They ate grass, leather, sawdust and even soil. Then people started eating dogs, cats, mice and insects. As that neared extinction, they switched to wilder varieties. That food habit stays in China till date.

The Great Leap Forward took the country million of years backward. When countries were looking at increasing grain production, China was running out of animals to be eaten.

Can the country now get to eating more of grains and vegetables than wild animals? Trust time to answer that.

From China, let's go back to Pakistan where we began from today because an unusual infiltration is underway from Pakistan - the infiltration of locusts. Locusts are swarming into Indian territory destroying crops. The swarms have entered Rajasthan, Punjab, Haryana, and Madhya Pradesh. Rajasthan being the closest to Pakistan is the worst affected.

Who called them in? Absolutely nobody.

On the bright side, the Reserve Bank of India (RBI) came in with more economic reliefs. If you have a loan on your head, there is a small relief for you. RBI governor Shaktikanta Das has announced a three-month extension of the moratorium on term loans till August 31. What is a term loan? One which is for a fixed term and is repaid in regular payments over a set period of time.

But what exactly is a moratorium? The first likely use of the moratorium, our Word Of The Day, was made in 1870s and finds its roots in Latin word ‘mora’, which means delay. A moratorium is typically a pause, a delay or postponement, not a cancellation.

But all pauses or delays are not moratoriums. Moratorium is the temporary stopping of an activity by official agreement.

So this disruption in our lives may be temporary, but is not a moratorium because we had no official, not even an unofficial, agreement with the coronavirus on it. If you want to know about the other relief measures from RBI’s kitty, read this.

That will be all for today. What you can do tomorrow and day after tomorrow is watch Ghoomketu. Why? Read this to find out.

#Sourav Ganguly, #Mao Zedong, #Wet market, #Pangolin
The views and opinions expressed in this article are those of the authors and do not necessarily reflect the official policy or position of DailyO.in or the India Today Group. The writers are solely responsible for any claims arising out of the contents of this article.