DailyOh! What were Rajiv Gandhi's last words, to Amphan apocalypse

We have lost sense of time and remembering dates would have been impossible if not for the extension of lockdowns. Most of us now remember dates from one phase of the lockdown to the other. Everything in between is a blur. Even the memories of the last date we went on. That, of course, happened before the lockdown kicked in and kicked life out of our lives.

But today, May 21, is an important date. Twenty-nine years ago, on this date, former Prime Minister of India Rajiv Gandhi was assassinated. He wasn’t PM when that happened, but there was a strong chance of his return to power in the mid-term Lok Sabha elections for which he was canvassing at Sriperumbudur in Tamil Nadu. 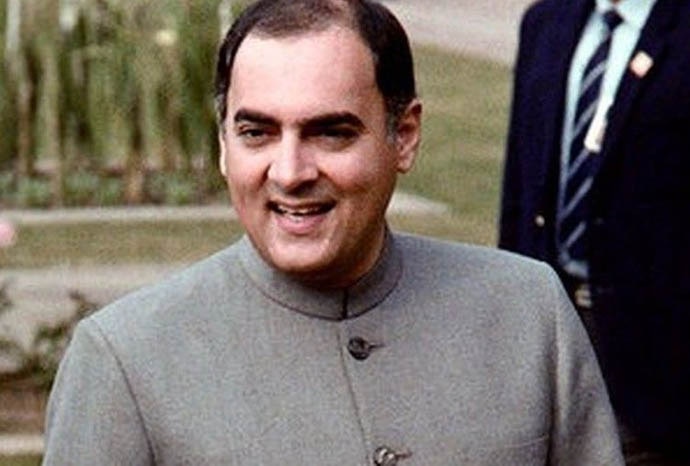 At about 6 in the evening when Rajiv Gandhi was supposed to take off from Andhra Pradesh's Visakhapatnam to reach Tamil Nadu, Rajiv’s chopper developed a technical snag. Disappointed, Rajiv was headed for the guest house in Visakhapatnam when he got a call saying that the snag had been fixed. The former PM was now in a hurry to reach Chennai, then Madras, so he forgot to inform his own personal security chief OP Sagar that he was headed to Madras, and not the guest house.

So, Rajiv reached Madras without his personal security team. A little after 8.30 pm, Rajiv was being greeted by his party members in Madras. At about 10 past 10 pm, Rajiv reached Sriperumbudur with other Congress leaders. One of those who greeted him was Santhan, disguised as a Congressman. He was part of the plot to assassinate Rajiv.

The revelation about how the plot was hatched was found in the diary of one of the assassins. You can read about that diary and how the investigators reached the diary here.

The day he was killed, in his trademark style, Rajiv went about meeting the crowd. Part of this crowd was a woman in her 30s trying to move towards Rajiv. Anusuya, a lady constable, tried to stop the woman but Rajiv directed that she be allowed to cross the fence. "Don't worry. Relax," Rajiv told Anusuya. These are believed to be his last words.

Then, as you know, the blast happened. There was blood and there was flesh everywhere. 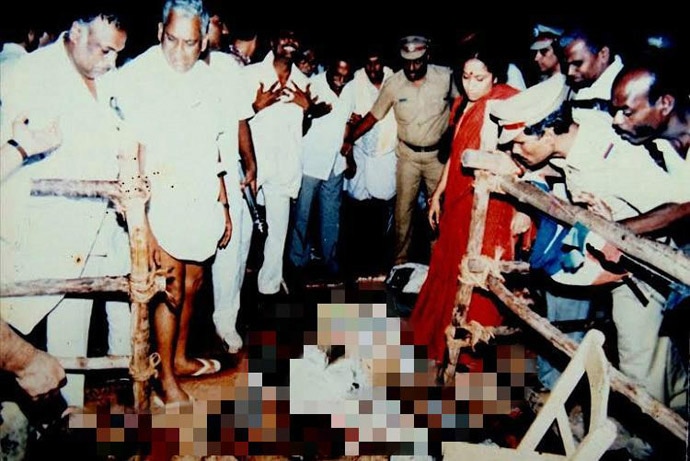 Most people only found out what had happened only on the morning of May 22. (Photo: India Today)

India’s former PM could only be identified because of his Lotto shoes and the Gucci wrist watch he was wearing. If you were old enough then, you would remember around the same time Rajiv was assassinated, a huge storm struck most parts of north India. Most people found out what had happened only in the morning, because there was an immediate power cut.

Talking of the storm, cyclone Amphan you know has made a landfall and as is customary for cyclones, left a lot of destruction behind.

Cyclone Amphan hitting Kolkata, Prayers for the safety of all #AmphanSuperCyclone pic.twitter.com/20a5BFd0Fl

We got talking about Amphan because we were talking about the storm of May 21, 1991, the day Rajiv Gandhi died. Twenty-nine years later, his party is paying tributes to him in Karnataka with little care or caution and amid crowds. The event happened in the presence of recently appointed Karnataka Congress chief DK Shivkumar. But all those present at the event qualify to be our Covidiots Of The Day. The virus is omnipresent and so are Covidiots. A crowd proved fatal for Rajiv then; a crowd could prove fatal for more now.

But Shivkumar has been at it for some time. He has been planning to go on a statewide yatra amid the pandemic. Now, we understand he is new to the chair and wants to prove himself, but any event that will gather a crowd currently will only prove that the person organising it and the persons attending it are all plain, simple idiots.

Thankfully, neither the state nor the central leadership of the Congress has so far come around Shivkumar’s idea of going around the state amid the virus outbreak. We offer our condolences to the party on this solemn day.

Rajiv's children Priyanka and Rahul Gandhi too paid their tributes to their father through social media today.

To be kind to those who are unkind to you; to know that life is fair, no matter how unfair you imagine it to be; to keep walking, no matter how dark the skies or fearsome the storm. To nurture a strong heart, and fill it with love no matter how great it’s sorrows; these are the gifts of my father’s life. (last photo with father)

In memory of my beloved father, Shri Rajiv Gandhi, who was martyred this day in 1991. He was a wonderful father; gentle, kind, compassionate & patient. I miss him. But he will always stay alive in my heart & in the wonderful memories I have of him. #RememberingRajivGandhi pic.twitter.com/bFO8CZoExN

Taking of the day, today happens to be the birthday of Malayalam cinema's superstar Mohanlal. If it’s your birthday too, we extend our wishes. If you want, you can extend your wishes to Mohanlal. Totally up to you. Giving that name to the man was, however, totally up to his great grandfather. If you live in north India, you would find nothing unusual about the name. But remember, Mohanlal is from Kerala, where such names are not usual. We told you Mohanlal got his name from his great grandfather, who gave Mohanlal's brother the name Pyarelal. A fan of Mohandas Karamchand Gandhi, the great grandfather expressed his fandom by naming his great grandson Mohanlal. By adding a lal to both Pyare and Mohan, he expressed his love for the kids too.

But we wonder if the great grandfather liked Gandhi so much, why didn’t he name himself Mohanlal. Maybe because we do not call ourselves by our names. We call ourselves, “I, Me, Myself”.

So, it’s better to name others after people we like because then we can call them that.

Anyway, we leave that at that because there is a serious issue we need to tell you about. Not that naming names is not serious business. But we want to talk about Nepal which has named India as the culprit for the coronavirus spread. KP Sharma Oli, PM of the neighbouring country, has said that people coming from India illegally are spreading the virus in Nepal. In his bid to play fair, and target enemies within and outside in one go, Oli has said that people in the country are helping people outside the country enter without proper screening.

This sudden India blame has surprised many in India. The surprised lot is the lot that doesn’t understand that Nepal is blaming India at the behest of China. Hindi-Chini could never become bhai-bhai, but Nepali-Chini are getting there.

China is basically our local land encroacher. Only, it is not desi katta, but nuke-powered. It has been trying to turn regional countries against India. The issue that Nepal has raised with India, at the behest of China, is Kalapani, a disputed border area between Nepal and India. You know when it comes to land disputes, they say, bhai, bhai ka nahi hota. There's no bigger example of that than Mahabharat. But what about behen? She has no land rights, so she stays out of the dispute. 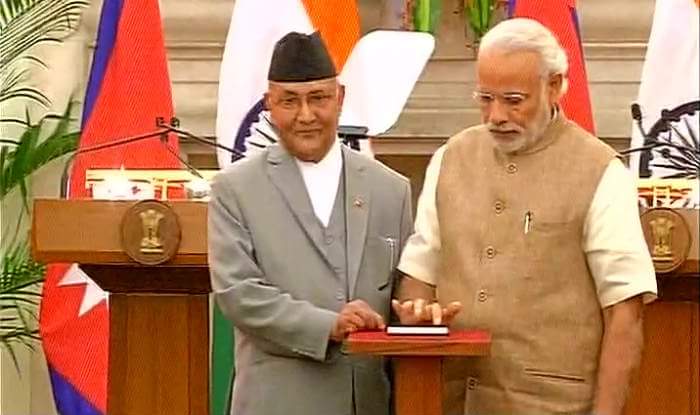 But the argument between these once-upon-a-time bhai and bhai, India and Nepal, shot off after an 80 km new road was inaugurated between Darchula to Lipulekh, the border pass near the trijunction with Tibet and Nepal. Now, Lipulekh is near Kalapani.

In the map of the area that was shared between the two countries in 1954, Kalapani was shown as Indian territory. In 2019, India came up with a new map that marks J&K and Ladakh as Union Territories. Kalapani was still shown as part of India in the map. But Nepal, which did not protest then, has protested now. As part of the protest, Nepal has done its own cartography and shown Kalapani as its territory.

This is the new map of our country. Thank you to the entire team, including the Prime Minister Oli. @PM_Nepal https://t.co/XuCH2s2y52

Actor Manisha Koirala has called in the ‘Big Brother’ in this two-brother fight. If China had its way, it would really mark the whole globe as China territory, including the seas and oceans. Also, including Nepal, which is cozying up to China. The Chinese cartography project marks Taiwan, Tibet, Hong Kong and South China Sea as Chinese dominion already. Many parts of India too.

The coronavirus pandemic, spread by China, may one day come to an end, but Chinese aggression won’t.

We will leave the unfolding of the dispute to time, but for now, we want to deal with cartography because that is what our Word Of The Day is.

Cartography comes from the French word cartographie, where ‘carte’ means map, and ‘graphie’ means representation by. In the present sense, cartography is the making and studying of maps. The exercise dates back to 6th century BCE when ancient Greeks and Romans created maps from the time of Anaximander.

In the times of corona, we thought the world would come together to fight corona, but the world is getting back to fighting over carte.

Leave the world aside for now, no flights are going there anyway. Let’s talk about the flights that will fly from May 25. Remember, it’s not going to be travel as usual. The SOPs are in place and strict. If you are one of those who take pride in telling your friends that you reached the airport just when the boarding was closing, stay home. Don’t even bother booking a ticket. Chances are you will lose money. Domestic travellers in the country will now have to report at least two hours before the flight take-off.

For others things you need to follow, read this.

Remember this is only for domestic travel. Guidelines for global travel would be stricter whenever world travel resumes. World travel will resume when it resumes but World Bank has a new financial crisis expert - Carmen Reinhart. She has got the job but she won’t be joining before June 15.

Reinhart is a Harvard University professor considered an authority on international finance and financial crises. You may say this is a different kind of crisis, but then, remember she has written a book, on financial disasters, This Time is Different: Eight Centuries of Financial Folly. She wrote the book along with Harvard economist Kenneth Rogoff.

Can she fix the financial folly of the coronavirus? Keep track of time because time alone can answer that.

#Kalapani, #India-Nepal ties, #Rajiv gandhi assassination, #Rajivgandhi
The views and opinions expressed in this article are those of the authors and do not necessarily reflect the official policy or position of DailyO.in or the India Today Group. The writers are solely responsible for any claims arising out of the contents of this article.