Why Kumbh Mela on UNESCO list is matter of pride

Holy men gather at the riverbanks during the fair, discussing religious texts and all things spiritual.

The Kumbh mela has been included in UNESCO’s list of Intangible Cultural Heritage of Humanity, during its 12th session underway at Jeju, South Korea. The list includes 32 other practices from around the world, such as the art of  Neapolitan Pizzaiuolo from Italy, Uilleann piping from Ireland, and Chogān, a horse-riding game accompanied by music and storytelling from Iran.

“Intangible heritage” refers to "oral traditions, performing arts, social practices and rituals, festive events, knowledge and practices concerning nature and the universe or the knowledge and skills to produce traditional crafts", which communities across the world associate with their culture, and pass on from generation to generation.

In 2003, the UNESCO General Conference adopted the Convention for the Safeguarding of the Intangible Heritage, recognising that conserving culture required more than protecting monuments and other physical objects. According to the UNESCO’s website, Kumbh Mela made the list because it is the “largest peaceful congregation of pilgrims on earth”, and the event "encapsulates the science of astronomy, astrology, spirituality, ritualistic traditions, and social and cultural customs and practices, making it extremely rich in knowledge".

“As it is held in four different cities in India, it involves different social and cultural activities, making this a culturally diverse festival. Knowledge and skills related to the tradition are transmitted through ancient religious manuscripts, oral traditions, historical travelogues and texts produced by eminent historians. However, the teacher-student relationship of the sadhus in the ashrams and akhadas remains the most important method of imparting and safeguarding knowledge and skills relating to Kumbh Mela.”

So what is the Kumbh Mela and why is it important?

What is Kumbh Mela

Kumbh Mela literally translates to “the fair of the pot”. The fair is held at four river banks sacred in Hindu mythology, at an interval of three years. Thus, the mela returns to every city in 12 years, and taking a dip in the rivers during the mela is believed to wash away one’s sins.

Also, "holy" men gather at the riverbanks during the fair, discussing religious texts and all things spiritual. Devotees can benefit from the discussions, or just pay respects to the "holy" men and earn their blessings. The time for the mela is fixed according to the alignments of the sun, the moon and the planet Jupiter.

The fair held after six years is called ardh, or half, kumbh, and the one after 12 years held in Allahabad is called a purna, or complete, kumbh.

After 12 cycles of a purna kumbha is held a maha kumbh, the grandest and the holiest of all kumbhs, also at Allahabad. The last one was held in 2013, and the next will be held 144 years after that. As many as 120 million people – almost double the population of France – attended the 2013 Kumbh.

Apart from these, the annual Magh mela at Allahabad is also called the Magh Kumbh.

It is believed that the river waters during the time of the fair become potent because they take on the properties of amrit, or divine nectar, that was spilt here. Thus, bathing in these rivers rinses off all sins.

How and why was the amrit spilt?

Beyond the salty seas of the earth lies the ksheer sagar, an ocean of nectar. The devas (gods) and asuras once decided to churn this ocean to extract the riches it contained. Mount Mandara was chosen as the rod for the churning, called the samudra manthan, and the serpent Vasuki as the rope. To ensure that the mountain doesn’t sink, it was kept on the back of a turtle, or Kurma, which form Vishnu assumed as one of his 10 avatars.

From the churning, along with other valuable things, arose a pot of amrit, being carried by the sage Dhanvantri. The one who drank the amrit would become immortal, and so the devas wanted to keep it from the asuras.

In the ensuing struggle, drops spilt from the pot and fell on four spots on earth, where the kumbh mela is now celebrated.

Who spilt the drops while fleeing with the pot is uncertain. While some say it was Indra’s son Jayant, others say it was the divine bird garud. Vishnu, who had taken the form of the enchanting dancer Mohini to distract the asuras, is also said to have spilt the nectar while dancing. Other stories say it was Dhanvantri who made stops on four places on earth.

The Kumbh Mela, as UNESCO said, is the largest peaceful gathering of pilgrims on earth. Devotees from across class and castes come together for the holy dip in the river, something unusual for a caste-bound, hierarchical Hindu society.

The Kumbh mela also witnesses a huge gathering of sadhus – various kinds of holy men – from across India. A lot of these sadhus have renounced the material world, and Kumbh is the only time when they mingle with the mainstream.

Devotees go for the sacred bath after the members of the various recognised sadhu collectives, or akharas, have had a dip. The akharas march to the river in a grand procession called the peshvai, with the leaders sitting on thrones and chariots. 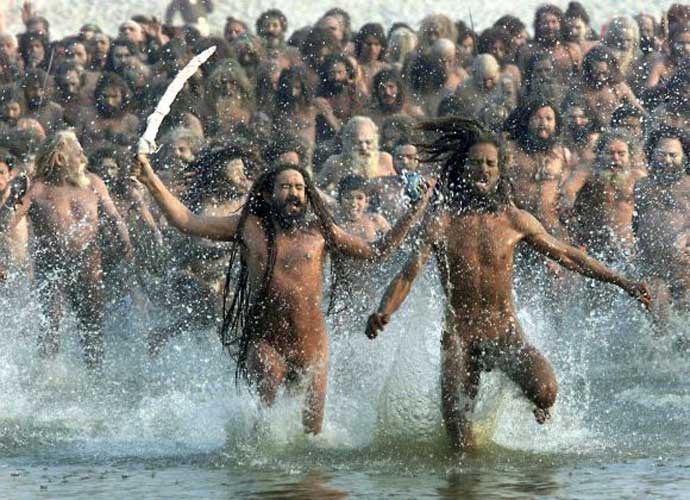 Some of the akharas are the Nirmohi akhara, the Juna akhara, the Niranjani akhara and the Mahanirvani akhara. Thirteen of them participated in the Simhasth kumbh held in Ujjain last year. Some of the members wield weapons, as the akharas were originally formed as bands of warriors to protect the Hindu faith.

The sadhus attending Kumbh include the Naga babas, or naked "holy" men, ascetics who are engaged in some extreme expression of faith – such as holding a hand aloft or standing on one leg – those who haunt cremation grounds, those who bathe thrice a day, etc.

Thus, the more domestic faith of the householder Hindu can interact here with religion that has transcended societal boundaries, and help expand his understanding of Hinduism and of various ways of life.

The sadhus – ash-smeared, with matted hair, smoking marijuana, or dressed in white, yellow or saffron, busy with religious texts – obviously make for a rich, overwhelming visual spectacle, which is an education in itself.

In the past years, women and transgenders have started setting up akharas of their own.

For this life and after

The concept of rebirth is important in Hinduism. Depending on your karma in your present life, your future lives are decided – what form of living creature you will be born as, and how much happiness or suffering will be your share. The ultimate goal is to be free of the cycle of births and rebirths, joy and sorrow, and attain nirvana, a state of the soul’s oneness with God. Taking a bath in the holy waters during the Kumbh cleanses your past sins, and gives you a clean karmic slate to start afresh.

The amrit was extracted by churning the ocean. Similarly, through constant churning of thoughts, you can extract your truth, which can cleanse your mind and set you on a new path free of evil.

The interactions with and blessings of "holy" men you meet at the Kumbh Mela can help drive the churning in the right direction.

The Kumbh Mela has witnessed millions of people undertake voluntary journeys of faith, for thousands of years now. Over the years, arrangements for the fair have greatly improved, and now websites and social media are used to keep devotees updates and informed.

The mela stands for continuity, for the new India’s unbreakable links with ancient India, and for the celebration of many shades and shapes of faith.