Born on Valentine’s Day, why Madhubala, the Venus of Indian cinema, was ill-fated

She was victimised for her beauty and few could see beyond it.

Did the Gods plan it all? Did they make her flawlessly beautiful and send her down into this world on Valentine’s Day while ensuring that she could never be truly happy in her life despite the ethereal beauty she was endowed with? It does appear something like this when we get to know the depths of pain and suffering this angel-faced young woman had to go through while always putting up a brave front before the world. It is indeed ironical that she was born in this month of love and had to go without love for most of her life, enduring her pain all alone and fighting with her disease in her darkest days. She pined for true love till the very end, till she died on February 23 at the age of 36. Forever young and lovely, she remains in our memories till now. Fresh and sweet!

So, what else does one say about a person who bloomed like a rose, spreading the fragrance of her being and then dying away, soon, like a rose, leaving behind an eternal trail of fragrant memories?

Madhubala’s legend has grown greatly since her demise till it has reached immense proportions today. The famous English romantic poet John Keats said, “A thing of beauty is a joy forever.” He could not have been more correct. Any beautiful person or thing can never fade away. They defy time and even death. Their memory remains alive in millions of hearts forever. 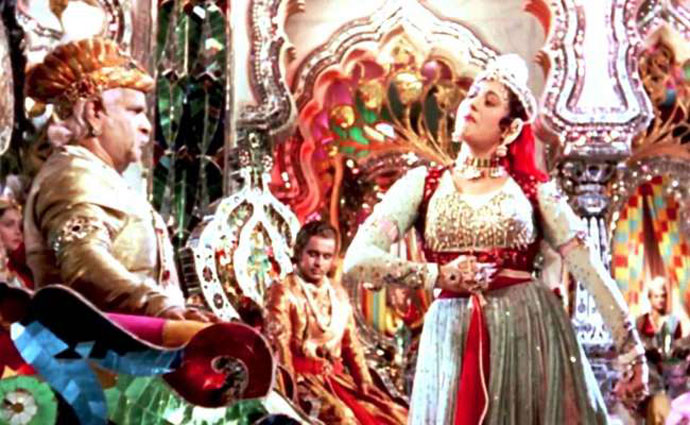 On the sets of the great classic Mughal-e-Azam, Dilip Kumar used to give her the cold shoulder after the shot was over.

Madhubala has reigned supreme in hearts for generations now as a symbol of unfading beauty. When Mumtaz Jehan Dehlavi became famous as the celebrated Madhubala (the great Devika Rani gave her this name), a shower of superlatives were constantly showered on her. The Venus of the Indian screen, its definitive love goddess, the most beautiful heroine ever. She was a perfect blend of beauty and sensuality that worked on the audience like an elixir.

However, her life seemed to move inexorably towards its tragic finale.

Born in abject poverty, the fifth of her Pathan father’s 11 children, little Mumtaz enjoyed a brief stint as a child star in films like Basant. The close of the '40s presented the 16-year-old with the super successful Mahal. Even as the plaintive refrain of “Aayega aanewala” captivated the country, it heralded the arrival of a superstar.

But personal heartbreaks lay ahead for Madhu. Her relationship with Dilip Kumar was not meant to be. She loved him intensely but the many complexities of the relationship (especially her father Attaullah Khan’s attitude) brought it to a stage where they were not even able to speak to each other.

She plunged into a marriage with Kishore Kumar in 1960 — the year which saw her touch the zenith of her career with K Asif’s larger-than-life Mughal-e-Azam.

On the sets of the great classic Mughal-e-Azam, Dilip Kumar used to give her the cold shoulder after the shot was over. She did try to talk to him but he had simply blocked her out of his life and affections. As she plays Anarkali in this film, one can see Madhubala’s passionate love for Dilip Kumar shining in her eyes. Dev Anand, who worked with Madhubala in many films, including his own Kala Pani, writes about Madhubala in his autobiography:

“I remember Kala Pani the most for Madhubala, its leading lady, the most beautiful of all the heroines in the fairyland of films, with her natural looks, always as fresh as morning dew, sans heavy makeup, false eyelashes or contact lenses Her innocence was accentuated by the most noticeable trait of her character, her famous giggle. She was forever giggling at the slightest pretext. Nobody knew when the next bout of giggles would come, and once it did, how long it would last! Many times, she would suddenly start giggling during the take when the camera was on. The lights had to be switched off indefinitely and tea ordered, until she was able to get a hold of herself. The great giggler was perhaps laughing at the world around her that did not know that she had a damaged heart, and would die quite young.”

At one time, her life began to disintegrate and her films began flopping, giving her the tag of “box office poison”. After the court case related to BR Chopra’s Naya Daur, she was diagnosed with a hole in heart. But Madhu was a fighter.

She singlehandedly turned her career around with a string of hits like Phagun, Howrah Bridge, Chalti ka Naam Gaadi, Kala Pani and Barsaat ki Raat.

Determined to forget the past, she plunged into a marriage with Kishore Kumar in 1960 — the year which saw her touch the zenith of her career with K Asif’s larger-than-life Mughal-e-Azam.

Eyes heavy with grief, she illuminated every shade of meaning in the classic remark she made when Dilip Kumar gave her thorns as a prize in the Qawwali contest in the film. “Kaanton ko murjhaane ka khauf nahin hota (thorns have no fear of withering away)”.

She shifted back to her home. Conditions were such that the marriage could not be a smooth one. The “giggler” and the “most beautiful” woman had a lonely and sad end. Before her death, she did ring up Dilip Kumar saying, “I will be alright soon. Will you work with me at least in one film! Dilip replied, “Yes I will do so. You recover fast.”

Khatija Akbar in her biography of this great star, titled I Want to Live, draws comparisons between Madhubala’s impact on Hindi films and Marilyn Monroe’s impact on Hollywood. Both women, she says, were victimised because of their beauty and few people could see beyond it.

The last few years of her life spent in virtual solitude and death, in a way, came as a release for her. Her last words were “I want to live”.

And she has been living ever since. In our hearts, in our memories. This ill-starred Venus.

Also read: Sad if my love for India is measured over whether I stand up for the national anthem or not

#Indian cinema, #Women, #Madhubala
The views and opinions expressed in this article are those of the authors and do not necessarily reflect the official policy or position of DailyO.in or the India Today Group. The writers are solely responsible for any claims arising out of the contents of this article.