Your protest versus mine: Those asking why no Kathua-like outrage over Mandsaur rape are wilfully missing the point

Kathua had the powerful openly backing the accused. In Mandsaur, the police has done its job, and the locals have disowned the accused.

If you have been on social media recently – Twitter, WhatsApp, Facebook – you have by now seen multiple variations of: “Why are there no protests over the Mandsaur rape? This crime is as horrible as Kathua. Only because the girl is a Hindu and the accused a Muslim? These pseudo-seculars only wish to defame Hindus.”

Chances are, you, or someone you know, has nodded to this, saying: “Point toh hai. Every rape is horrible – but why the selective outrage? Why no candle marches and placards from the so-called liberals and seculars?” A tale of two protests: After the Mandsaur rape, locals took out a protest march in support of the victim. (Below) In Kathua, the protest march was in favour of the accused. Photo: PTI/Twitter 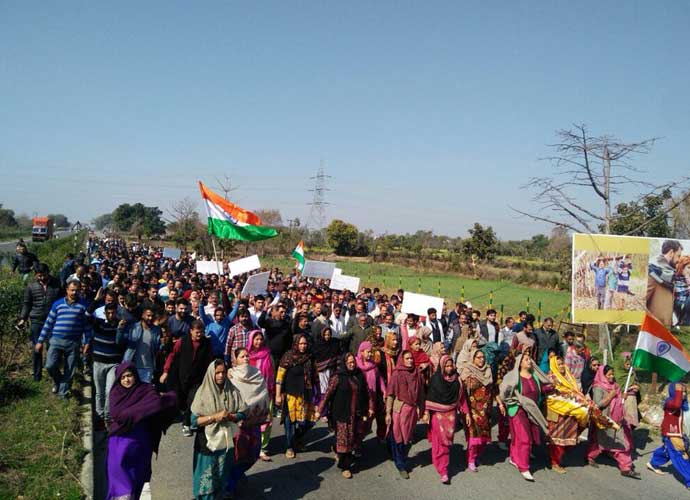 Not one statement in that line of argument is right – morally, factually or logically.

Every rape is horrific. What is also horrific is rape being used for score-keeping, facts deliberately misrepresented to bash groups and communities you don’t like.

There are inescapable facts here. These include:

The 'religion' of crime

And if we must bring religion in before we outrage over a crime, Kathua, the probe so far suggests, was an outright communal crime. The 8-year-old Bakarwal girl was raped and killed to create fear in the minds of local Muslims and force them to flee the area. It was not the media or “liberals” who brought religion into the crime – it was the accused, who saw the child as a “Muslim girl”.

It was those rallying in their favour who saw the accused as Hindus, and who raised voices in their support under platforms such as the Hindu Ekta Manch. If Hindus were indeed 'insulted' and defamed in the process, it was by such people, who used religion to shield those allegedly involved in such a heinous crime, not by those who raised their voice against the crime.

In contrast, the Muslim community in Mandsaur has publicly asked for the accused to be hanged. Lawyers have refused to represent them. Muslim leaders from the area have declared that the accused will get no space in community graveyards, and Islamic prayers will not be offered after their death.

Those taking out protests for the Kathua rape accused are in no way representatives of all Hindus. Yet, they assumed that power because political parties chose to consider them as such – both Congress and BJP leaders were part of the Hindu Ekta Manch, and no political party spoke out against the rape for a long time, for fear of alienating Jammu's Hindus.

What the Hindu community needs to protest is this — that the powers-that-be are assuming that some demented, violent people are spokespersons for all Hindus.

That such people are being allowed to set the agenda on behalf of the whole Hindu community.

This “selective-outrage” narrative is being peddled on social media by several influential people. Here are some tweets, by famous people, by those with thousands of followers, by those followed by the Prime Minister and Union ministers.

For an outraging generation of Indians, Mandsaur shall also pass. History will judge Botox-ed Celebrities & hypocritical editorial elites for whom rapes come with TRP tags where only Muslims are victims to Hindus criminals! Mandsaur doesn’t allow their communal ego to be busted.

Here is my tweet and I stand by it!This is about Selective outrage in Bollywood and media which is very visible! As an artist I steer clear of falling trap into any political controversies that journalists like @abhisar_sharma create!Tweet is very much here! @abpnewshindi pic.twitter.com/4xSArZJTDv

During #Kathua, had seen huge posters in Pune with d child’s pic and provocative messages like ‘Get laws of Islam to India and rape won’t happen’. Anti-Hindu memes like Trishul with a condom were shared. No such thing is seen in #mandsaur yet they accuse Hindus of ‘politicising’

Why’s INC demanding CBI probe in the Mandsaur case where the victim is alive and the rapist has been caught? In Kathua, random villagers were picked-up & medical reports didn’t match police’s version. So locals demanded CBI enquiry. The same Congress called it a pro-rapist stand.

And of course, Amit Malviya, the head of the BJP IT Cell:

Deeply disappointing to see all those who branded the entire Hindu community as rapists after Khatua maintain stoic silence after the Mandsaur rape because rapists are Muslims. Let me see if any of them can step out with a placard and malign all Muslims for act of Asif and Irfan.

The tweets are full of false equivalences and open bigotry. If you are willing to exploit the emotive potential of rape, women’s safety is surely not your concern.All you care about is Muslim-baiting, and discrediting voices you don’t like because they call out your bigotry and hatred.

This is the mentality we should be protesting, and outraging against.

Post your comment
#Social Media, #Selective outrage, #Kathua, #Mandsaur rape
The views and opinions expressed in this article are those of the authors and do not necessarily reflect the official policy or position of DailyO.in or the India Today Group. The writers are solely responsible for any claims arising out of the contents of this article.