MS Dhoni and his Balidaan: The lessons to learn from women's tennis

The recent brouhaha over MS Dhoni's armed forces insignia turned the whole affair into one of hyper-nationalism, cricket be damned. Personally, I'm with Dhoni, but not for the reasons you'd think.

The closest experience of the Army I've had was when I had to do compulsory NCC in school. I lasted three days.

We did the usual standing at attention and 'at ease', quickly moving on to a gun salute performed with a heavy, antiquated WWII rifle. The instructor barked commands, while we stood under a sweltering sun, and threatened to knock us down with the butt of his rifle if we made a wrong move.

The next afternoon, when the time came for NCC, I was laid up in bed with a high fever. I'm not quite sure how psychosomatic illnesses work, but this fever was for real. It registered its presence on the family thermometer. I managed to get excused from NCC. I missed out on the guard of honour that was given to Mamata Banerjee. I'm still not quite sure what brought Mamata to Boys' High School, Allahabad, in the mid-1990s.

My next encounter with the Army was the Stanley Kubrick film, Full Metal Jacket.

The first half features the training of new recruits, ordinary civilians freshly drafted into the US army in aid of the Vietnam War. One recruit finds it exceptionally tough; he is singled out repeatedly during training until he eventually cracks — and shoots the sadistic instructor before shooting himself.

After this, I was even more convinced that the miraculous fever that I'd developed in the first days of NCC practice was a manifestation of my subconscious instinct for self-preservation.

The fever saved me and the instructor.

By 2000, Delhi's nightlife was changing, churning for the better; new pubs and clubs sprang up overnight and vanished as quickly.

What happened to Fireball? The big hit in Delhi, at the turn of the millennium, was, strangely, Status Quo's 'You're in the Army Now', originally released in 1986. Status Quo, in turn, was covering a song originally performed by South-African born Dutch duo Boland and Bolland in 1981.

It remains a mystery why an anti-Vietnam war song touched a chord in the subcontinent almost two decades after its release.

Whatever the reason for its popularity, I was hugely relieved that Bryan Adam's 'Summer of '69', originally released in 1984, had finally been toppled from its pole position in the Indian charts.

The lyrics of 'You're in the Army Now' went: 'Smiling faces on the way to 'Nam/ But once you get there no one gives a damn/ Shots ring out in the dead of night/ The sergeant calls: "Stand up and fight!"/ You've got your orders to shoot on sight/ Your finger's on the trigger but it doesn't seem right/ You're in the army now.'

The lyrics confirmed my suspicion of the army as a joyless robotic rule-following entity.

I'd never been more grateful for the mysterious ailment that swiftly ensured my exit from a future life in uniform. Imagine going to work every single day in the same uniform. Well, someone broke the monotony! (Photo: AP)

It's not that I am critical of the army way of life. I just wasn't cut out for it. In cricket, temperament plays a crucial role; it humanises the sport and defines one's role in the team.

Mahendra Singh Dhoni's calm temperament meant he was suited for the captain's job. His love of the Army is also part of his natural inclination. If regimented parachuting gives you pleasure, go for it.

Dhoni did something else though that led to a controversy.

He parachuted a fashion statement on to the cricket field in the form of the insignia of the Indian Army's Parachute Regiment, which he wore on his gloves, in contravention of ICC rules.

While the hyper-patriotic turned this into a battle between the Indian Army and the rest of the world, cricket be damned, I prefer to see it as a rebellion against uniform.

Imagine going to work every single day in the same uniform.

When it comes to this, a cricket player and an employee at a coffee or fast food chain or an airline are on the same page.

One has to wear the same clothes day in and day out.

It must get dreary.

Even regular office-goers are allowed to personalise their cubicle, break the sameness a little bit.

The irony here is that to break the monotony of one uniform, Dhoni had to borrow from another. This was a clash between two uniforms — one belonging to a sport and the other belonging to the armed forces. A uniform by definition cannot waver; a uniform is a symbol of mythical purity, not a celebration of the mix and match school of dressing.

What made Dhoni's decision controversial was that he wore a symbol of patriotism on his sleeve.

Would it have been different if a cricket player, also a fan of the heavy metal band Megadeth, wore the band's insignia on a cricket glove?

Indian fans need to be less touchy about national pride — patriotic fervour shouldn't degenerate into corniness. As the teachers in my Protestant school used to say: 'The Good Book says, there's a time and place for everything.'

Teams from South Asia, it seems, like mixing the army with sport, in a way Australia, England and the West Indies do not.

A couple of years ago, the Pakistan team broke into synchronised push-ups and salutes on the field after winning a Test match in England. An English commentator wondered aloud: 'What on earth is the Pakistan team doing at Lord's?' As it turned out, the Pakistan team had spent some time training with the Pakistan Army before embarking on their England tour. It was their way, the captain explained, of expressing gratitude to the army.

It's another matter that Pakistan went on to lose the series.

In March, the Indian cricket team, in an ODI against Australia, wore army-style camouflage caps to honour the CRPF personnel killed in Pulwama, with the BCCI logo on the front and Nike's logo at the back.

Cricket uniforms have been tinkered with in the past.

The Sydney Cricket Ground has been hosting the 'Pink Test' on New Year's Day in remembrance of Glenn McGrath's wife, Jane. The McGrath Foundation works to raise awareness about breast cancer. Earlier this year, Virat Kohli showed his support by coming out to play with a bat that sported a pink sponsor's logo, a pink bat handle, and gloves streaked with pink.

As a lifelong hater of uniforms, I am on Dhoni's side.

It's always nice to challenge the moribund dogmatism of school-prefect types, the upholders of the eternal status quo.

The other sport where players tend to fall foul of clothing regulations is women's tennis. Players are always testing how far they can go with the officials. Very often, the fight is between the practicality of common sense and the orthodoxy of tradition. Wimbledon, where only whites are allowed, has been witness to plenty a sartorial rebellion over the decades. 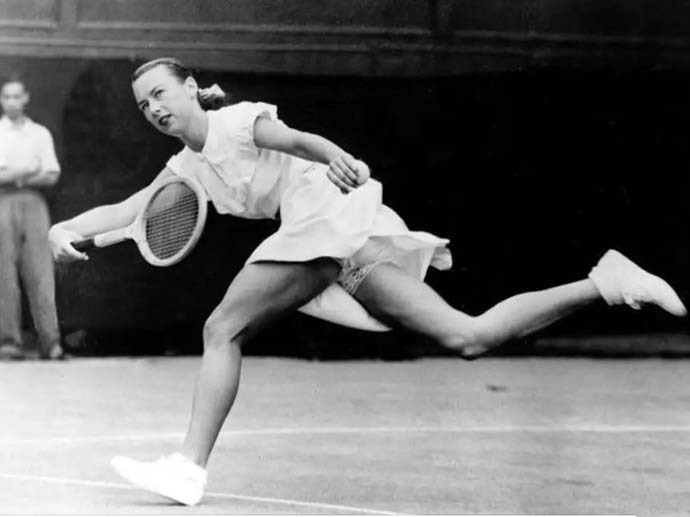 1949: Gertrude Moran was rapped for introducing 'vulgarity and sin' into tennis. (Photo: AP)

In 1949, when the norm for women players was to wear knee-length skirts, the American Gertrude Moran turned up to play in a much shorter skirt and frilly lace underwear, which led to The All England Club rebuking Moran for having introduced 'vulgarity and sin' into tennis.

In 2007, Tatiana Golovin got away wearing red shorts at Wimbledon but she left an unintended legacy. Golovin had taken permission from the referee; the loophole: the tournament rules didn't mention the colour of underwear. Subsequently, Wimbledon officials swung into action to change the rules — as of present, the rule book clearly states that underwear worn by players should be 'mostly white.'

Last year saw a major controversy erupt at the French Open over Serena Williams' catsuit, which she wore to prevent blood clots after a difficult childbirth. Officials were having none of it; now, the bodysuit is a banned item on court. There was an outcry on social media with fans pointing out that in 1985 Anne White has worn a similar body suit at Wimbledon. Her opponent Pam Shriver had blamed her loss on being 'distracted' by White's clothing. Sporting? Serena Williams' catsuit has generated controversies in the recent past. (Photo: AP)

Considering the absurdities that women tennis players have been subject to, Dhoni having to hang up his insignia gloves is a wee little balidaan to make if India wants to bring the cup home.

But it's also true that players in uniform should be allowed to indulge in small harmless expressions of personality, for their own motivation as well as to engage their fans. The ICC might well respond: for that, there are tattoos. But what if I don't want to scar my skin or my partner doesn't dig tattoos? Let's not forget that tattoos themselves were taboo till a few years ago. People were rejected for jobs only for the tattoos they were wearing.

Meanwhile, Indian fans should take it easy. We're all not in the Army now, as in the chorus to the famous song.

Only Lieutenant Colonel Dhoni has honorary membership of the Parachute Regiment. And he's ejected safely.

#Army-insignia, #Balidaan badge, #MS Dhoni, #Cricket
The views and opinions expressed in this article are those of the authors and do not necessarily reflect the official policy or position of DailyO.in or the India Today Group. The writers are solely responsible for any claims arising out of the contents of this article.