A 5km walk behind Atal Bihari Vajpayee's hearse, watch over a daughter light her father's pyre and then reaching out to Kerala with succour, exhibit the PM's political acumen.

Television cameras zoomed in on him, thinking he would get into his car and join the funeral procession at the Rashtriya Smriti Sthal — about 5km away. Modi, on his part, positioned himself behind Vajpayee's hearse.

As Vajpayee started his final journey, Modi took measured steps behind the vehicle carrying the mortal remains of the BJP's tallest leader, to be laid to rest in eternal peace.

Television anchors, and the experts who had joined them in newsrooms, began speculating at what point Modi would break away from the sea of people and have himself driven in his official vehicle to the funeral venue. While that discussion was on, Modi picked up pace with party president Amit Shah by his side, and with BJP chief ministers and leaders following closely.

In the hot, extremely humid and oppressive weather conditions of August, 67-year-old Modi showed no sign of exhaustion. His lieutenants kept pace, not disappointing their leader.

Modi was making a statement, and making it in style — Atal Bihari Vajpayee was a BJP leader, who had scripted some of the party's highest ideals. But Modi also ensured Vajpayee was seen widely as a BJP leader who had made great contributions to India, indeed, shaped some of its defining moments beyond a party line.

Atal Ji, you will live on in the hearts and minds of every Indian. No words can ever do justice to your rich contribution towards the making of our country. pic.twitter.com/TcQEmF68Mi

While the nation gathered to pay tribute to Vajpayee on August 16, and then participate in his last journey a day later, Modi rushed to AIIMS to be by Vajpayee’s side on August 14 when the news of the former Prime Minister’s deteriorating health reached him.

He met the doctors and took stock of Vajpayee’s health. The news wasn’t good. Vajpayee was sinking. The BJP’s tallest leader, despite the best medical care, was critical at a time the nation was preparing to celebrate its Independence Day. As a leader whom the party would look up to in Vajpayee’s absence, Modi had a humongous task at hand — to stay strong and ensure that his personal sense of grief over Vajpayee's condition did not come in the way of his responsibilities as India’s Prime Minister.

Fully aware of Vajpayee’s declining condition, Modi reached the Red Fort on August 15 to tell the country where India was headed — and to offer it an uplifting vision. He delivered a full 82-minute speech talking about how the Ujjawala Yojana was ensuring gas connections for the poor, the success of the Swachh Bharat Mission, the decision to launch the Pradhanmantri Jan Arogya Abhiyan, and how the government was committed to ensuring the poor are steered out of poverty.

Quoting facts and figures, lacing his long speech with poetry to highlight his vision of a new India, Modi sought to inspire the country by saying that India won’t just emerge as a great nation, but would also inspire others.

Even as he spoke trying to enthuse the nation, he privately shouldered the emotional burden of Vajpayee’s failing health.

He invoked Vajpayee in his speech, underlining the party’s resolve to remain committed to the ideals set by the great leader.

This commitment, to work tirelessly and ceaselessly, in the face of loss and grief, is one of the defining factors of Modi’s leadership.

Having delivered his speech, Modi once again reached AIIMS because he knew what Vajpayee meant to the nation and to the party that he had helped build.

As is the case with any Modi speech, the dissection had started and criticism was rising. His detractors called it the address of a leader who was staring in the face of defeat and was desperate to just somehow retain ground. Little was it known then that at that point in time Modi wasn’t just facing criticism but the fear of losing Vajpayee forever.

There was work to do — and there were signs that Vajpayee unfortunately may not recover. Modi was juggling between the two with calm and composure.

His visit to AIIMS on the evening of August 15 wasn’t a customary VVIP visit aimed at symbolism. He ensured that he stayed by the leader’s side even in the middle of all the occasion's work.

The committment showed thereafter too. Modi was determined to give Vajpayee his fitting due — a ceremonial farewell that not only had world dignitaries mark their presence in person, but also leaders cutting across political divides. A 5km walk to see off Vajpayee, led by Modi, joined by thousands of BJP workers, was a humble tribute the party showered on the former Prime Minister.

Despite the fact that Vajpayee had apparently once wanted Modi's resignation, despite the fact Vajpayee had reportedly once publicly embarrassed Modi, reminding him of maintaining 'Raj Dharma', Modi embraced Vajpayee with a full heart now, visibly moved, calling him "Mere Atal Ji".

At the Rashtriya Smriti Sthal, then, under Modi's careful watch, Vajpayee's funeral also became an example of a silent, and remarkable, social change underway in India. 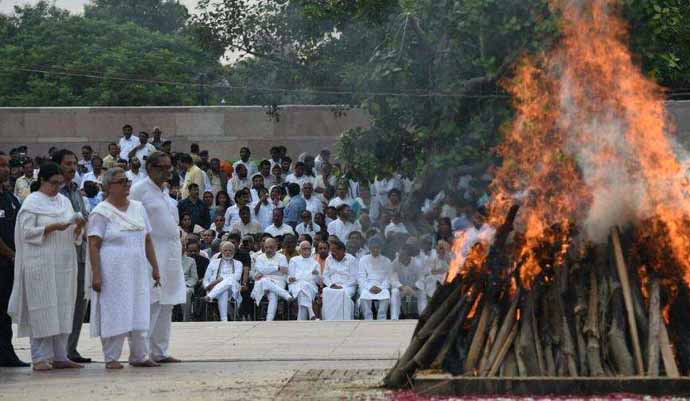 A stir that has silently been underlining social reform in India was exhibited instead with Vajpayee's foster daughter, Namita Bhattacharya, performing the last rites. His granddaughter, Niharika stood close by to ensure Vajpayee was laid to rest with the highest honour, love and respect. 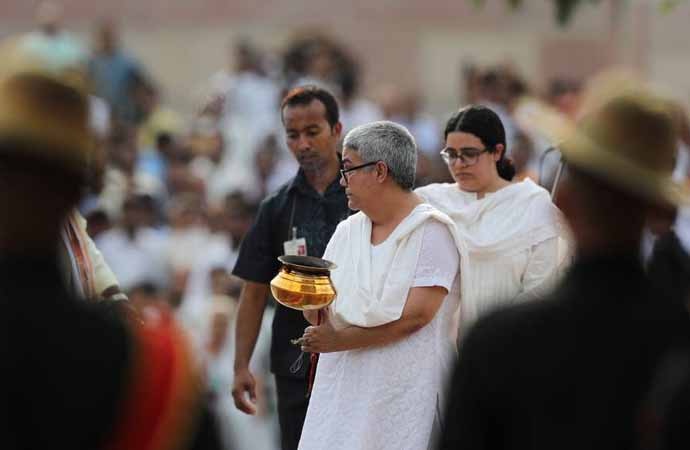 Modi, known to many as "Hindu Hriday Samrat", became a front-bench spectator to this historic churning, a woman taking charge of a once entirely male-dominated ritual, within the Hindu fold.

As Vajpayee's poems were played from loudspeakers, amid chants of Vedic mantras, the ambience was underlined by an unprecedented solemnity. Everything was planned down to the last detail. Modi had ensured "his" Atal ji's funeral was one that will be remembered as much as the leader himself. Young party leaders were tasked with ensuring those who came to pay their respects to Vajpayee were taken care of. BJP leader Anurag Thakur was looking after the foreign dignitaries, while defence minister Nirmala Sitharaman ensured Vajpayee's family could perform his last rites in peace.

Legacies are what political parties are often judged by, apart from, of course, the work they do.

Invoking Vajpayee in political speeches going into an election year would have been of little consequence if the BJP would have forgotten to honour him fully in life — and then death.

Modi, the astute politician, ensured the BJP is in a position now to appropriately claim Vajpayee's legacy by ensuring an emotional and politically powerful farewell for him.

As he saw off Vajpayee's family and other leaders at Rashtriya Smriti Sthal, Modi wasn't done for the day even then.

A part of India is in deep pain. And the Prime Minister knew he had to tangibly reach out.

The flood situation in Kerala was worsening and Modi knew he had to hurry with help. It is important for people caught in crises to know the nation cares and it is for this reason that the Prime Minister's visit counts.

Modi headed straight for Kerala. The very same day, the very same night, that Atal Bihari Vajpayee was laid to rest. Many young people would not be able to pull it all off in a single day.

While there is frustration in certain quarters about whether the financial relief extended by the Centre is enough, the Prime Minister's landing in Kerala after a physically and emotionally draining day only added to his political acumen. It also showed his ability to work tirelessly for people in distress.

In three steps, spread just over a day and a half, Modi has perhaps exhibited a staunch commitment to Raj Dharma.