People are also criticising Atal ji. And they must. But to become indecent while criticising him will force us to make the same mistake for which we often damn our adversaries.

There are moments when writing or saying anything about someone isn't so simple. The reverberations of thoughts and emotions within the mind and heart act much like the thump of water in a tub that is fast getting filled to the brim. A sense of sadness takes over the conscience and then disagreements within one's own self start to smell like freshly dug up earth.

Atal is no more. 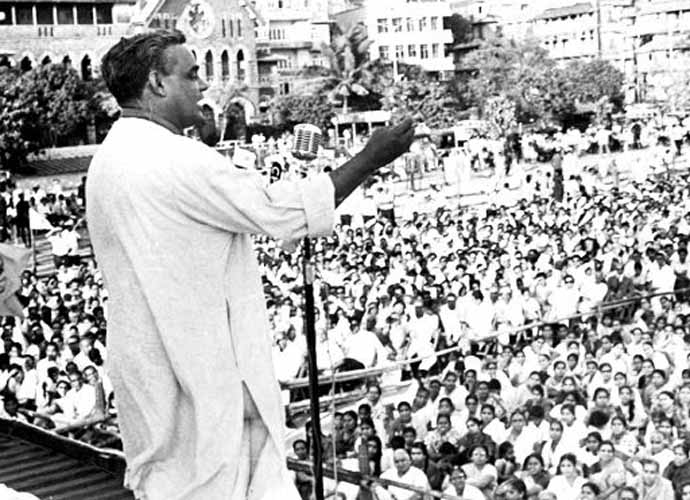 Atal Bihari Vajpayee could electrify any crowd with his speeches (Source: Archives)

A political person whom you respect irrespective of whether you agree or disagree with him is no more.

A person for whom I had been waiting to wake up and speak up since 2004 has crossed over to the other side of life. In lighter moments, I often used to tell my acquaintances connected to the Sangh and the Bharatiya Janata Party (BJP) that one day Atal Bihari Vajpayee would stand up and say, "Get the car ready, let's go to Race Course." And then the 'general' leading you today would appear defeated before one of his own heroes.

The opportunity to exchange this banter has been lost forever.

My father had been a socialist and mother a nationalist. I got introduced to the Sangh in my childhood itself. Attended the Shakha. Sang songs. Organised Shakhas for the youth. After playing kabbadi, I distributed leaflets door-to-door advertising swadeshi.

Went to shivirs and got to know the Sangh from close quarters. But the most motivating part of this understanding of the Sangh was Atal ji's speeches.

Dr Murli Manohar Joshi was known to my father, however, the most loved person for the entire family was Atal ji.

The reason for this love was his honesty. His impressive personality. Unparalleled oratory skills. The choice of words and his commitment to ideology. Drenched in sweat, he could speak with equal ease in all kinds of weathers and all kinds of places. My mother listened to him for she agreed with him, my father listened to him even though he did not agree with him. So, I grew up listening to Atal ji.

While Sangh has remained very formal and parochial when it comes to food, its conduct and reciprocal behaviour, the stories of Atal ji - his food, his friends, the ease with which he communicated - never failed to attract one towards him.

I gave my first political speech in 1990 at the age of eight. After that there was no stopping. I even got the opportunity to speak from Atal ji's stage. In front of a crowd of thousands I spoke with a sense of Atal in me. Some called me mini Atal, while others called me a future leader. But in my childhood, Atal ji was my leader and I his disciple. From 1991 to 1993, I met him every year. At times in Delhi's Lajpat Nagar during the campaigning for Shatrughan Sinha and at other times in Rae Bareli, Kanpur during some rally or at the Fursatganj airport escorting him. He saw a child dressed in dhoti-kurta with a childlike enthusiasm and often patted my back laughing out loud.

But the spell of Sangh began to break following the images that emerged from the demolition of the Babri Masjid in 1992. The casteism that pervaded the Sangh only added to my disillusionment. When I started reading BR Ambedkar, the reality of Sangh and the BJP started peeling off like the many layers of an onion and revealing an ugly reality.

My father added fuel to the fire and explained how the party, which uses its workers like fertilizer, is nothing but a party of traders, Brahmins and Thakurs. It's not dedication but money that counts here. It's not sacrifice that matters, it's the gurudakshina that counts.

In 1994, this student of Saraswati Vidya Mandir shifted to Rajkiya Inter College and the expectations from the Sangh and the BJP started to fade away. While I had drifted away from the Sangh and BJP, I continued to meet some national and international leaders and debate with them. From the hollowing morality within the Sangh to caste and the importance of the ordinary karyakarta, I kept raising all kinds of questions.

Even as this was going on, the 1999 elections arrived. My father's friend Arun Nehru, visited our house as soon as he reached Rae Bareli. Nehru, who was a BJP candidate, asked me to campaign for him. Sanjay Singh, who came from Amethi, took a similar promise back from me with him. Both were contesting on the symbol of lotus.

I campaigned for both. The last meeting I had with Atal ji happened during one of these campaign trails on a rally stage in Rae Bareli. Atal ji took to the stage after my speech and we all heard him speak. Next evening, Priyanka Gandhi held a rally in the same ground. Her speech went on to change the course of the election. Arun Nehru lost.

After this Atal Bihari became Prime Minister and I his adversary.

From disinvestment to privatisation, I deferred with him on every aspect. I saw Atal ji's government drift away from its core principles. I could see that the slogans that Sangh made us raise in the name of swadeshi, the songs that it made us sing, the country it made us venerate treating it like our own mother, it was now standing in opposition of all of those.

From then till now, I have not been able to agree with BJP's politics. I saw Congress's expansion in BJP. Added to this was BJP's communalism. The rising tendency to muzzle dissent has only made matters worse.

But, this piece is about Atal ji. To understand him, for some time, it is important to see him through the lenses of his political commitments like we should see any other party worker belonging to any political ideology.

Whether it was the question of wearing the skull cap, the openness to food habits, providing medical care to Pakistani artists in India or coming to the rescue of officers with a clear track record, Vajpayee did a lot of things that have been out of character for any leader from his party. 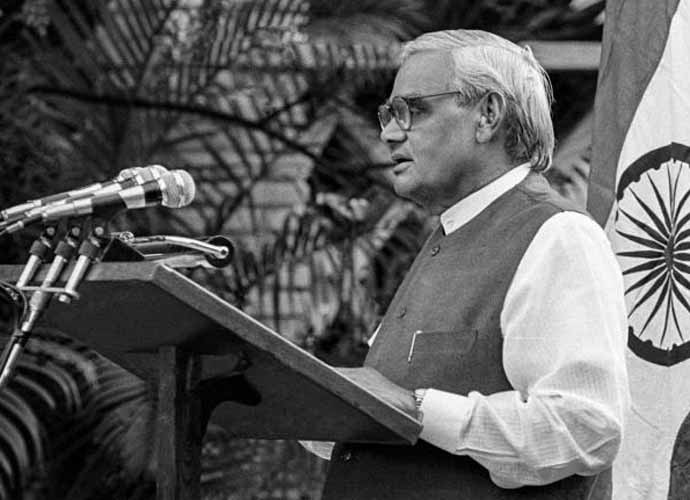 He heard out the Sangh and kept it satisfied. But he also gave space to people outside the Sangh within the party and made them stronger.

Politics demands compromises and even Vajpayee had to make them. But it is these compromises and the ability to take everyone along that is the real strength of politics.

Vajpayee was alone even amid his own because he never went out to accept the others. Those he accepted, he ensured got both place and respect in the party. While he was in the BJP, he was often told that he was 'the right leader in the wrong party'. This actually appeared to be true on several occasions. But BJP's most popular leader never undermined the party. Despite differences with the Sangh, he never attempted to weaken the organisation to make it dependent on him. Today, the Sangh and BJP have fitted themselves into the mould set by one man. Both will get razed to the ground if that person is removed from the equation.

The only kind of leaders who succeed in democracies are those who do not rise like timbre trees straight towards the sky. But the ones who make a mark are those who leave the scope to bow like mango and peepal trees. Those who have humility and shame. Those who maintain a basic decency in their language and dialogues. Those who also have two ears, if they have a mouth. Living by his ideology, Atal ji managed to be that mango tree. Even war has rules. It also has its set of ethics. Atal ji ensured it did.

Today, despite all the differences, I have respect for him and am deeply saddened by his loss.

The jokes of death

Nobody in this world is beyond criticism. It is up to us to see what good things we can take from even something/someone bad. Since the news of Atal ji's demise came in, messages of grief have poured in. But there has also been a lot of criticism. When I look at grief, I realise people of all political parties and ideologies are remembering him. The most surprising has been the mourning over his loss in Pakistan. People are remembering a leader who presented an opportunity before the masses to cross borders and meet each other.

People are also criticising him. And they must. But to become indecent while criticising him will force us to make the same mistake for which we often damn our adversaries. 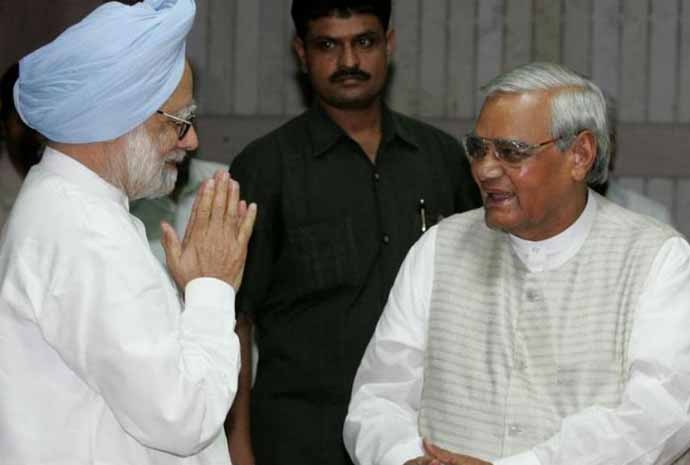 Atal Bihari Vajpayee believed in engaing with everyone (Source: PTI)

If the language of our criticism makes us fascist, it is better we remain quiet.

In comparison to Atal ji, we may be a dissenting nation but we can definitely learn from him how to remain loyal to ideology and the country. How can we at least leave a scope 'for others' that today has been left neither by the BJP, nor the Congress and Communist parties.

Limited and restricted world views are a reality of present day politics. Wherever you look, you'll find groupism. Everywhere an aversion to dialogue. Communists are happy giving speeches within their own groups. Congress is unable to accept anyone new. For BJP, those who are not theirs just do not exist. If they exist, they are anti-nationals, enemies.

It is for this reason that I couldn't belong to anyone. While everyone tried to welcome me, I endured not to fall in the well and remain its entrapped frog forever.

Vajpayee allowed that scope to exist. His demise has brought an end to that scope. Political parties will now have to look for the Vajpayee among them so that both committment to ideology and democracy can thrive.

Democracy — both of the party and the country.

Post your comment
#Sangh, #Babri Masjid, #Atal bihari vajpayee death, #Atal Bihari Vajpayee
The views and opinions expressed in this article are those of the authors and do not necessarily reflect the official policy or position of DailyO.in or the India Today Group. The writers are solely responsible for any claims arising out of the contents of this article.