Pakistan has long peddled the fake narrative that India abhors military action and only its elites were warriors anyway. With PM Narendra Modi, Pakistan is now discovering how wrong it was.

On Monday evening, as Prime Minister Narendra Modi saluted the eternal flame while inaugurating the National War Memorial, he knew what was coming for Pakistan that night.

The picture, with the eternal flame in the foreground and India Gate in the background, will go down the nation's memory as one of Modi’s iconic photos for he has done what no other Prime Minister ever did. He has crossed the international border to launch a pre-emptive strike straight into Pakistan. Make no mistake — this is a paradigm shift in India, shaped around the Gandhian version of 'ahimsa' or non-violence, which itself depends on a debatable narrative of India as a civilisation which abhors war.

Truth be told, valour, heroism and righteous wars have always been glorified in Indian culture. India is not an epitome of non-action when it comes to militarism — in fact, at least for the past few centuries, India has been among the most militarised societies in the world and perhaps the most militarised with the beginning of the Mughal-Maratha war.

The British had to fight several major wars just to establish their rule and in 1857, they had to face a huge popular revolt from a heavily armed populace. The British had to kill reportedly over 10 million people even after suppressing the revolt to re-establish their control. In fact, every decade of British rule was marked by massive violent revolts by the Indian people, especially the subaltern sections of the population.

It was the British who disarmed the people — and significantly decimated our social capacity to wage war.

The narrative, that British conquered India because ‘a peaceful people’ didn’t resist, or that the British quit India because Mahatma Gandhi said ‘Quit India’, needs to be jettisoned for a realistic view of the world. No, the British didn’t quit India due to Gandhi’s prayer meets and sermons. No, they didn’t leave India even due to the mass movements launched by the Gandhi-led Congress.

But, as BR Ambedkar said, the British lost the will to rule India after they saw Indian soldiers willingly joining the Indian National Army (INA) and the Bombay Naval Mutiny of 1946. Yet, somehow after independence, we internalised the distorted image of the Indian freedom struggle being 'non-violent'. Beautiful as they were, the fact is, the British did not quit India because of Gandhi's sermons. (Source: Wikimedia Commons)

We inculcated this Gandhian myth in our history writing — and forgot that India survived for thousands of years, not by philosophical talks, but by the force of military arms.

From the Dasarajna, ours has been a history of great empires — the mighty Magadha, magnificent Guptas, glorious Cholas, the resolute Gurjar-Pratihara, the Marathas and many more. And these mighty empires and polities were certainly not built and sustained by singing bhajans or defeating the others at poetry contests!

Even our epics glorify great wars and martial heroism. We fought Yavanas, Huns, Kushans, Arabs, Turks, Mughals and the British. From the Skandagupta facing down the Huns to the defeat of Arabs in the Battle of Rajasthan to Raja Suheldev Pasi annihilating the Ghaznavid army at the Battle of Bahraich to the relentless resistance of Maharana Pratap to the pertinacious Shivaji, the history of India is a history of armed resistance against those who challenged it.

And that is the reason why India survives, despite such a turbulent past, facing the same enemies who annihilated several cultures and civilisations across the world.

It is this tradition which Narendra Modi has reinstated with the air strikes inside enemy territory. He has put an end to the cowardliness of the modern Indian political elite — masked as ‘strategic restraint’ or ‘maturity’. He has stopped the culture of second-guessing the capabilities of our armed forces. Modi has called the bluff of Pakistan which believed that Indian leaders would never have the spine to retaliate to the permanent war imposed on India.

Modi has instilled fear in Maoists, Islamists and separatists, despite all the brave posturing they may adopt — their fear now is that if the Pakistan army can’t resist the might of the Indian state, then what chance do they have? In the past five years, with several strikes across the border, Modi has buried the hubris of Indian traditional elites.

Certain Islamist-leaning sections in India along with the Pakistan army recently made much noise about the 'caste credentials' of the CRPF jawans martyred in Pulwama, saying they all came from ‘lower castes’ — but they alongside forgot the person occupying Delhi’s highest chair also hails from a ‘lower caste’. 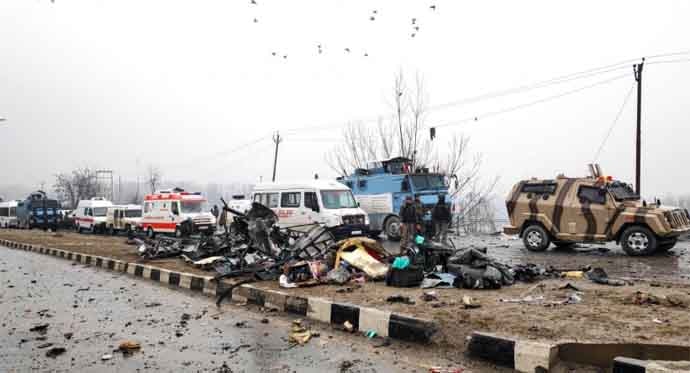 The Pulwama attack site: Some are even trying to divide the martyrs on the basis of caste. (Source: Reuters)

And like the great Kakatiya empire, he openly proclaims his humble origins — nay, celebrates it just like them. Lest we forget, so fierce was the resistance offered by the Kakatiyas to the Turks that they were thrown into a state of disbelief. Even after their fall, the resistance was kept alive by Prolaya Vema Reddy, who liberated Andhra from the Delhi Sultanate and proudly described himself “as one of the four varna that emerged from the feet of Mahavishnu” to rid the land of the wicked Turks after Kshatriyas had been killed for the protection of the Agraharas and Brahmanas.

This is perhaps another lesson for the Pakistan army — this is what you get when you get your ideas from the far-left rags and demagogues in India and believe in the bogus narrative that Indian nationalism and Hindutva is an ‘upper-caste urban’ fantasy. Modi has broken away from the millennium-old 'Prithviraj Chauhan syndrome', of trusting and pardoning an attacker, to pay for it dearly later. Modi has instead launched a pre-emptive strike against those who threaten Bharatvarsh and its people. He has signalled that India will no longer just wait and watch as its enemies attack, but will actively seek war if our national security and strategic interests so demand.

And no amount of threats will deter the brave warriors of India.

This indeed is a pivotal moment in our history.

Post your comment
#Mirage 2000, #Surgical strike 2.0, #Narendra Modi, #Iaf air strike
The views and opinions expressed in this article are those of the authors and do not necessarily reflect the official policy or position of DailyO.in or the India Today Group. The writers are solely responsible for any claims arising out of the contents of this article.