Five speeches that established Modi as an orator and a statesman

Prime Minister Narendra Modi’s political success, especially on the national level, can be hugely attributed to his pitch-perfect speeches.

Political speeches are seldom about views and promises. While such speeches pretend to encapsulate the orator’s ideas and vision for the people he is speaking to, the crux of fine political oratory is the emotional charge it carries.

When every politician promises more jobs, better living standards, poverty alleviation and a corruption-free society what helps people trust one leader more than the other is the emotional charge with which s/he sells those dreams. Any mass leader thus has to be a good orator.

Prime Minister Narendra Modi’s political success, especially on the national level, can be hugely attributed to his rhetorical speeches that draw power from his body language, a crucial aspect of good speeches.

Here are the five times Modi proved he is a speaker par excellence.

In February 2013, Narendra Modi was invited by Shri Ram College of Commerce (SRCC) in Delhi University to address the students. As a leader who had by then set his eyes firmly on the Prime Minister’s chair, Modi’s decision to address young college students to assert himself as a national leader was a bit risky.

In speaking to the youth, Modi ensured he also appealed to the ‘pride of the nation’.

“The youth of the nation has its finger on the mouse of computers and is changing the world. India's journey has gone from snake charmers to mouse charmers,” he said to loud applause and massive cheering.

He used the SRCC stage to tell the people of India that his model of growth in Gujarat was robust and that he could replicate it on a national scale.

"If you go to Afghanistan, the people there have tomatoes that come from Gujarat," he said.

The speech attracted attention and became the talking point across the nation.

Modi’s job was half done!

In September 2014, he made his debut at the United Nations General Assembly (UNGA) — and succeeded at establishing himself as a global leader to watch out for.

He used the speech in the UN to tell the world that India had arrived as a force to reckon with.

He raised basic issues of access to elementary sanitation facilities, potable water and electricity to millions of people around the world, sending a signal that he was concerned about the real issues facing the people and that India wasn’t just a country fighting its myriad problems, but was ready to raise the issues ailing the world as well.

A day after the UNGA address, thousands of Indian-American Modi supporters were seen lining up excitedly outside the iconic Madison Square Garden to listen to his eagerly awaited speech.

“I might live miles away from you, But I do understand your issues,” Modi said and won thousands of hearts in one sway.

He invoked Mahatma Gandhi to establish his connect with the NRI audience, only to be appreciated with thunderous applause and loud chants of ‘Modi-Modi’ across Madison Square. 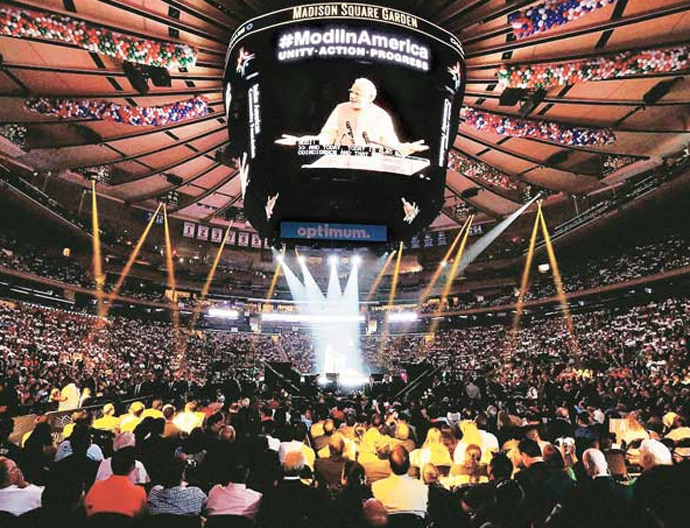 He invoked nationalism and left the NRIs enthralled. A lot of leaders do it, but it was Modi’s style that won the day for him.

“World will not have enough young people to work. We will cater to the manpower requirement,” he said — and the crowd believed him because they believed in him.

4.). Address to the US Congress

In June 2016, Modi became the fifth Indian Prime Minister to address the US Congress — a full 11 years after the country denied Modi a visa over the 2002 Gujarat riots, the period during which Modi was Gujarat chief minister.

At the very beginning of the speech, Modi made it clear he wasn’t carrying any bitterness with him, projecting himself as both humble and a statesman. “I am deeply honoured by the invitation to address this Joint Meeting of the US Congress... in granting me this opportunity, you have honoured the world’s largest democracy and its 1.25 billion people,” he said.

He raised his arms, applauding the contribution of US soldiers to the cause of freedom and democracy. “I applaud… India applauds, the great sacrifices of the men and women from ‘The Land of the Free and the Home of the Brave’ in service of mankind," he said leading the audience in an extended round of applause.

Modi ensured the use of humour to establish a good connect.

His joke about more and more Americans bending “for yoga" than “to throw a curveball" was received well.

With this speech, Modi succeeded in selling India’s soft power, reaching out to the US leadership, projecting India as a global power, and showing himself as a man with no rancour — all at once.

At the recent inauguration of the National Museum of Indian Cinema in Mumbai, Prime Minister Narendra Modi asked the audiences, "How's the josh?" quoting Uri: The Surgical Strike.

#WATCH: PM Modi asks "How's the josh?" at the inauguration of National Museum of Indian Cinema in Mumbai. The audience responds with "High Sir" pic.twitter.com/Da3y1xUiuP

He built up the atmosphere before putting up the question to the audience that comprised mainly Bollywood celebrities.

“Aap sab ke liye ek sawal hai (a question for all of you),” he said before asking the audience about the josh.

The audience responded with, “High, sir!” — again a line from the movie Uri.

Several leaders have since followed Modi’s style and have been seen asking their audience, “How’s the josh!”