Ocean's 8 and the luxury houses that Indian royals built

When Ocean's 8 opens worldwide this week, Mindy Kaling, who plays a jeweller Amita, will not be the movie's only connection to India. At the heart of the all-woman con movie is the heist of the Nawanagar necklace that was recreated for the film by the 171-year-old Paris-based luxury house, Cartier.

In the movie, Sandra Bullock stars as Danny Ocean’s sister, who gets together with Kaling, Cate Blanchett, Anne Hathaway, Sarah Paulson, Awkwafina, Rihanna and Helena Bonham Carter, to steal a Cartier necklace from the Met Gala. The Nawanagar replica is known as the Toussaint in the movie as a tribute to Jeanne Toussaint, Cartier's late creative director.

The original necklace was designed by Jacques Cartier for the maharaja of Nawanagar – that's cricketer Ranjitsinhji, or Jam Saheb Shri Sir Ranjitsinji Vibhaji or Nawanagar, to you and I – in 1931. It included the Queen of Holland, a blue-white 136.25 carat diamond. The necklace was described as “the finest cascade of coloured diamonds in the world”. 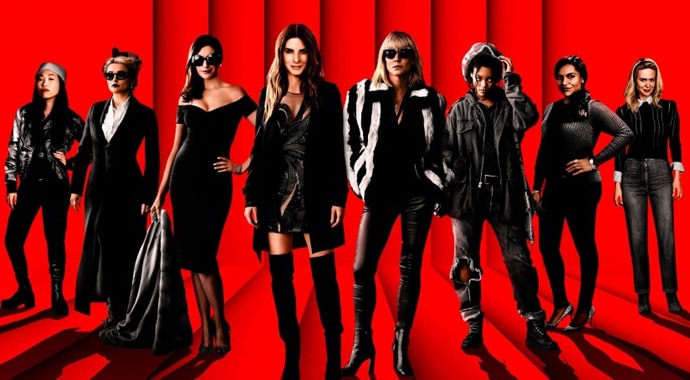 And then it is said to have disappeared, though Amin Jaffer, author of the authoritative Made for Maharajas: A Design Diary of Princely India (Roli Books), says it was ''broken up during the lifetime of the maharaja himself because he couldn't afford to have so much of his wealth tied up in one piece''. Jaffer's book tells the fascinating story of how Indian royals built the world's finest luxury houses with their fabulous wealth and extravagant tastes.

The luxury story extends from Salvatore Ferragamo to Louis Vuitton, and the role of Indian royals in building these maisons has not been publicised by the biggest conglomerates of the world.

Much before bespoke luxury became a buzzword, the late Ferragamo was commissioned to make one hundred pairs of shoes for Indira Devi of Cooch Behar (a feisty beauty, a friend of the famous including Mary Pickford and Douglas Fairbanks, compulsive gambler, collector of fine jewellery and mother of maharani Gayatri Devi of Jaipur).

One particular pair of shoes was made with pearls and diamonds supplied by the maharani herself records Ferragamo in his autobiography, Shoemaker of Dreams. Indira Devi’s chic chiffons, imported from Paris, became the trademark look for all royal princesses, as did the sari-over-left-shoulder look first tried by her mother-in-law, the very enlightened Suniti Devi, who was the daughter of Brahmo Samaj leader Keshub Chandra Sen.

But women were not the only ones who preened and paraded their wealth. Watches were a great indulgence for the male royals. When Jacques Cartier, head of the London branch and friend of Ranjitsinhji, came to India in 1911, he found royals wanted pocket watches which were at that time high fashion in Paris and London.

So the French jeweller sold maharaja Jagatjit Singh of Kapurthala one in blue enamel; one in gold to Nizam Osman Ali Khan of Hyderabad; one in platinum to Ranjitsinhji (no wonder he was perennially in debt) and one in pave diamonds to the Aga Khan III.

Cartier's exposure to Indian jewellery had a twin impact – it inspired the firm's eastern-style creations, and just as maharajas admired western settings in platinum, so did western clients develop a penchant for the decorative effects of Indian jewellery, writes Jaffer in Made for Maharajas, particularly the flamboyant mixture of coloured stones, marketed under the label tutti frutti and the multi-stranded ropes and tassels of pearls and jewels.

Jaeger LeCoultre took customisation even further when it created a new watch, Reverso, with a flip cover for polo-playing princes, whose mallets would end up destroying the watch-faces. For maharani Gayatri Devi's husband, maharaja Man Singh II of Jaipur, the brand created a Reverso with the emblem of the Sawaiman guards on the reverse to be distributed to his favourite officers.

Pranav Saboo, CEO, Ethos Watch Boutiques, loves to tell the story of Reverso. In 1931, when LeCoultre brand associate César de Trey posed the polo challenge to third generation corporate chief Jacques-David LeCoultre, asking him to make it mallet-proof, he engaged his firm’s French instrument affiliate, Jaeger, to focus on the engineering, and Jaeger, in turn, commissioned French engineer Chavot to execute the design. Thus the Reverso was born and remains a bestseller even today.

As for couture, Savile Row establishments regularly hosted Indian princes and kings. For instance, Gaekwar Sayaji Rao III was so regular a client of Henry Poole & Co, that he awarded the company a royal warrant – as did Jagatjit Singh of Kapurthala and Nripendra Narayan of Cooch Behar (Suniti Devi's errant husband).

The women were no slouches in the couture department with the Melbourne born Esme Mary Fink who became Rani Molly of Puddukottai being a regular client of Callot Seurs, Jean Paquin, Jean Patou, Madeleine Vionnet, Elsa Shiaparelli, Edward Molynneux and Jeanne Lanvin.

The maharanis who wore sarees were patrons of a French brand called Sarees which would supply the most exquisite French chiffon, usually at the rate Rs 30 per saree. Others who had Western tastes, such as Rani Sita Devi of Kapurthala, would order fur coats from Mainbocher and headdresses from Reboux.

The maharajas of Patiala were the leading luxury car buyers of the day, being the first royals to import a model from the then leading car producer, French firm de Dion-Bouton. The demands were often singular, from 24 carat gold plated fittings for Gaekwar Sayajirao III of Baroda to a Rolls Royce Phantom III ordered by his successor Pratapsinhrao, and lined with panther skin. There is, of course, that famous story of King Jai Singh of Alwar who is said to have ordered a fleet of Rolls Royce only to use them as cleaning cars to transport the city's waste on account of being insulted by the car company's salesman on his visit to London.

As for Louis Vuitton, maharajas were utterly loyal clients. Maharaja Hari Singh of Jammu and Kashmir ordered a suite of luggage from LV initiated J&K (talk about personalisation) including suitcases, wardrobes, a shoe case, a dressing box, a travelling case for a dictaphone and a travelling polo kit which encased his beloved mallets. So valuable a customer was he at Hermes that they appointed a salesman Bobby Breward, to deal exclusively with his requests – as a result even the saddles on the maharajas' polo horses were made by Hermes.

The Francophile maharaja Jagatjit Singh of Kapurthala – who was many other things such as the longest-serving maharaja in British India, the Indian Representative to the League of Nations on three occasions in the 1920s, the only Indian ruler to attend the conference at Versailles post World War One, a special friend of Queen Victoria and husband to six wives – was also an LV loyalist, ordering monogrammed wardrobes, hat boxes, and shoe trunks.

From 1895 to 1930, the maharaja ordered more than 60 customised LV trunks, all bearing his name, for his European hats, clothes and shoes. Not surprisingly when Louis Vuitton entered India in its new avatar (as part of Bernard Arnault's conglomerate LVMH) it chose Jagatjit Singh's great-grandson Tikka Shatrujit Singh as its brand ambassador.

LVMH is now the largest luxury conglomerate in the world, controlling over 10 per cent of international luxury sales, but perhaps it has not done enough to acknowledge how much of its vast fortune it owes to India's royal millionaires.

Will India's new millionaires ever catch up? Currently, India has 245,000 millionaires and as disposable incomes rise 25-30 per cent annually, by 2025, the country is expected to have more than 480,000 high net worth individuals or people with assets of over $1 million (Rs 6.8 crore).

But can any of our nouveau maharajas beat the idea of two gold tongue scrapers created and designed for maharani Sita Devi of Baroda by Van Cleef & Arpels?