Why this Pakistan election will be remembered for bloodshed

A series of deadly attacks were witnessed on candidates and campaign rallies.

Pakistan is voting today, July 25, to elect a prime minister. This will be just the second time in the nations' 70-year history when transfer of power will take place from one civilian government to another. The election assumes significance for a country of 200 million people facing political uncertainty and mired in conflicts.

This year's election could have been an occasion for Pakistanis to celebrate democracy. Instead, the campaign has been marred by suppression of the news media, accusations of manipulation by the military, a rise in Islamist extremist candidates and a series of attacks on candidates and campaign rallies.

Pakistan administration is on guard to face any eventuality even after polling ends on July 25.

However, this is not the first time that Pakistan is seeing violence during the election. The 1970 election witnessed a brutal civil war in its aftermath. The 2013 poll was one of the bloodiest elections in Pakistan's history.

According to Pakistan Institute of Peace Studies, a total of 148 terrorist attacks took place across Pakistan between January 1 and May 15, 2013 - most of them being in the months of April and May.

The attackers targeted political leaders and workers, election candidates, offices and rallies, and polling stations. As many as 170 people were killed and more than 700 injured in these attacks. Clearly, violence is a recurring feature of Pakistan politics.

The two-time Prime Minister of Pakistan was shot in Rawalpindi on December 2007 while she was campaigning for an election scheduled for January 2008. And his time, her son Bilwal Bhutto, who is also Pakistan People's Party (PPP) chairman was the target. Bilawal and his convoy were attacked on July 2. The incident took place when Bilawal was campaigning in his party's stronghold Baghdadi area of Lyari.

Angry protesters attacked the convoy of the PPP chairman shouting slogans of "go Bilawal go" and pelted stones at the convoy leaving many people injured and vehicles damaged.

The PPP has traditionally won from Lyari and Bilawal is contesting from the NA-247 constituency. He is, in fact, contesting the general elections for the first time.

Dubious record: Over 180 violent incidents in every election

Data compiled by the International Growth Centre show that between 1988 and 2010, Pakistan witnessed 27,555 incidents of political violence. Election-related violence constituted roughly four per cent of the political violence. Statistically, this means that 1,100 conflict incidents took place across the six elections during the 1988-2010 period, at an average of 183 incidents per election. The total number of people killed as a result of election-related violence in this period is estimated to be 380. 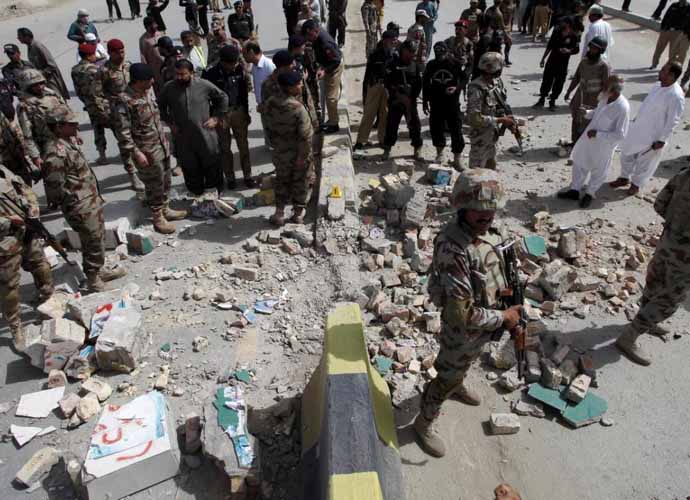 On July 22, Pakistan Tehreek-e-Insaf (PTI) candidate Ikramullah Gandapur was killed in a suicide attack in Dera Ismail Khan. He was contesting for the PK-99 seat. He had until recently served as the provincial agricultural minister in the PTI-led Khyber Pakhtunkhwa cabinet. He was elected through a by-election on the Dera Ismail Khan PK-67 seat after it was vacated following the death of his brother, former law minister Israrulah Gandapur, also in a suicide attack.

The most fatal election-related attack took place in Mastung on July 13 when a suicide blast claimed the lives of nearly 150 people leaving more than 200 injured. Mir Siraj Raisani, a Balochistan Awami Party (BAP) candidate, was also killed in the attack.

On the same day of the Mastung tragedy, a blast targeted former Khyber Pakhtunkhwa chief minister Akram Khan Durrani's convoy in Bannu. While Durrani escaped the attack, four people were killed and 32 others injured.

Before this, on July 10, a suicide blast in Peshwar killed Awami National Party (ANP) candidate Haroon Bilour and 19 others. The attack was claimed by the Tehreek-i-Taliban Pakistan (TTP), which had also claimed responsibility for 2012 attack that killed Haroon's father, Bashir Bilour.

On July 7, at least seven people, including a candidate of Muttahida Majlis-i-Amal (MMA), were injured in a bomb blast in Bannu.

A grenade attack on July 4 on an election office of a PTI candidate left 10 people injured in the Razmak area of North Waziristan district. The attack took place when PTI candidate Malik Aurangzeb Khan was inaugurating his election office in Razmak. A large number of politician's supporters were attending the ceremony when the grenade was lobbed.

Post your comment
#Violence in pakistan, #Bomb Blast, #Pakistan Tehreek-e-Insaf, #Pakistan general election
The views and opinions expressed in this article are those of the authors and do not necessarily reflect the official policy or position of DailyO.in or the India Today Group. The writers are solely responsible for any claims arising out of the contents of this article.