Period has won the Oscars. Why it’s time for companies making sanitary napkins to drop the shame around menstruation

Mainstream advertising leaves much scope for a lot to be done.

India’s entry at the Oscars for the short film category Period. The End of Sentence directed by Rayka Zehtabchi has got the Oscar. No mean task that considering the film talks of menstruation and the taboos associated with it. 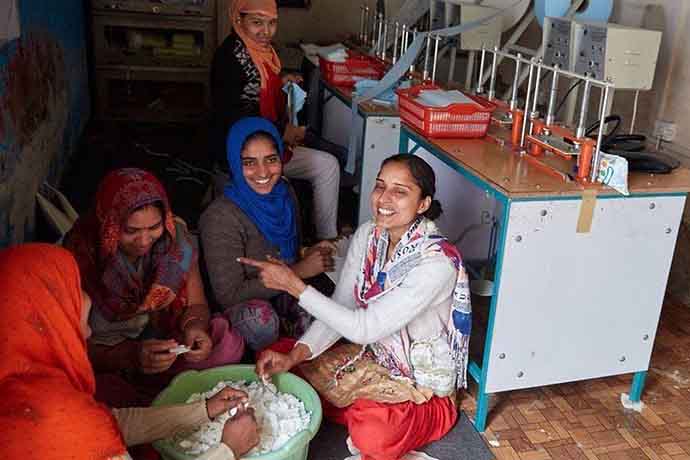 A still from the documentary Period. The End of Sentence.

The story broadly revolves around the lives of a group of women of Hapur in Uttar Pradesh who tackle the issue of female hygiene during menstruation. This ultimately helps them chart an individual narrative of self-reliance and financial independence. A machine that makes biodegradable sanitary pads is set up in the village and a few women are taught how to run the machine. However, running a machine is one thing and tackling age old customs, including using old cloth to soak the menstrual discharge, is several notches higher in terms of the psychological demand and the women (viewers included) get to understand this.

The village is a representation of a larger sociological space which does not accord too much visibility and freedom to its women. Health issues of women do not get any serious considerations. In fact, with menarche, little girls are kept back at home and they join the ever rising numbers of school dropouts. A ‘period’ therefore seems like a ‘sentence’, a lifelong term of imprisonment within socially constructed walls; where minus a crime there is punishment and decided obliteration of hopes, dreams, fun, laughter and freedom.

The manifestation of this sentence happens at several levels. Sometimes one is banned from entering temples, while at others times she is stopped from entering kitchens and pooja rooms; sometimes forced to sleep on the hard ground in seclusion, sometimes just kept away from the delectable pickle that adds some spice to meal times.

Really, a period is a sentence for most women living in contemporary India and works in big and small ways. This documentary, therefore, challenges this text and gives a voice to the motley group of women to begin a conversation over a long overdue subject and in a way carve out their own sense of identity.

The film joins other laudatory efforts to bring the issue of menstruation to centre stage. We had Padman (2018) based on a story titled The Sanitary Man from a Sacred Land written by Twinkle Khanna. For her work, Khanna had to chase Padma Shri Arunachalam Muruganantham to understand what led him to invent the low-cost sanitary pad making machine. In his life, this social scientist and entrepreneur tried to remove the innumerable taboos against menstruation and tried to give women their basic right — the right to live a healthy life. Padman was based on the efforts made by Padma Shri Arunachalam Muruganantham who invented a machine to make low-cost pads. (Source: A still from Padman)

In recent times, we have had women break into the Sabarimala temple and enter the sanctum sanatorium and finally crush the metaphorical walls of patriarchy working in tandem with the forces of religion and regressive mindsets that see menstruation as a dirty, polluting thing. In fact, the March 2019 issue of Femina, a popular women’s magazine, has given statistical evidence to show that partners refrain from sexual activity during the time of periods. Fifty-seven percent of the survey participants found it messy and dirty and wouldn’t think of indulging in sexual intimacy while on their periods.

Despite the dismal picture we have seen some uplifting initiatives work their way into mainstream culture like the period emoji shaped like a drop of blood has been added to the list of emojis. 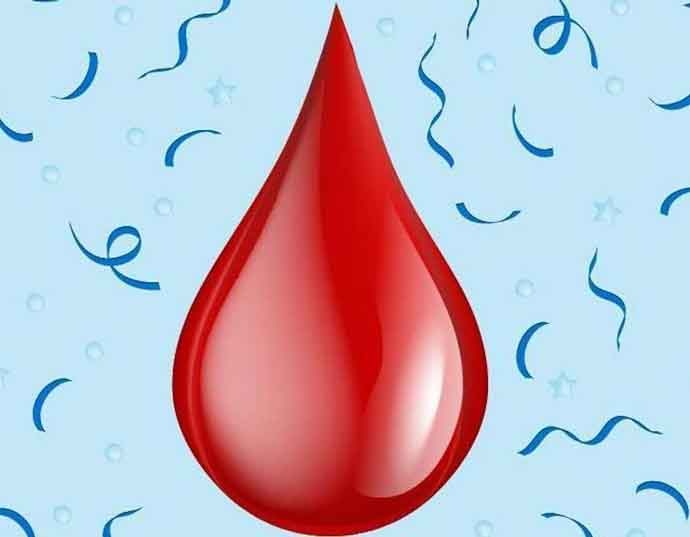 The period emoji goes a long way in dealing with the shame that surrounds periods. (Source: Twitter)

There is a petition doing the rounds on social media asking for the Railways to provide for a pad vending machine on platforms and on trains, plus provisions for their proper disposal. Also, deliberations are going on over giving menstruating women leaves without any deduction in their salaries. The latter is being hotly debated and whatever be the outcome there is reason for us to celebrate because mainstreaming the topic does mean that we have come away from the days of veiled references to periods.

Popular media engagement with the topic has released it from its shushed confines and we no longer need to say ‘those days’ or ‘un dinon’. In fact, it would be pertinent to cite an advertisement aired on all channels these days where popular actor Akshay Kumar is shown reprimanding a man for smoking and blowing away his money on something that could kill him. In the same breath, the actor impresses on the man that with the money spent on cigarettes he can buy low-cost sanitary napkins and save his wife from infections arising from using unclean cloth.

Despite these very helpful initiatives, which can ultimately lead to an empowered status for women and break the culture of shame surrounding menstruation, mainstream advertising leaves much scope for a lot to be done.

Frankly, the advertisements by major brands as Whisper, Sofy, Stayfree and various other players send across puzzling messages. For one underlining every story is the grand text of empowerment. So the sanitary pad can help the girl get an abnormal amount of energy that can get her racing through the sports field or the professional field. She feels good and breezy and fearless and is able to go from desk to disco without any physical discomfort.

Take for example, the Whisper ad where the girl is scared to enter into a dance competition because of her periods. However, with the timely switch over to a Whisper pad the girl is able to put up a brilliant performance. The subtext is unmistakable — that menstruation is a debilitating condition where women experience physical and psychological discomfort, it makes them question their skill set, their competence, sometimes even their identity. Finally, it is the brand and the napkin which lend power to the dreams. The mother in the Whisper ad sees the dejected child and concludes that it had to be her periods that the child was worried about. Nothing more and nothing less. That taken care of, all else fell into place.

Numerous advertisements use the colour white to push home the point that the tell tale marks of a period can be avoided by using a particular brand. So white bed sheets or white trousers are used to show that telltale signs of ‘those days’ can be avoided. So the red spot is a thing of embarrassment and one must do everything from buying double sized pads to sleeping in a straight, supine position to conceal it.

The colour story continues in the choice of ‘blue blood’. All ads show blue liquid dripping onto a pad and instantly congealing into a lumpy gel. Bodyform, a sanitary napkin brand of UK, has kick-started a mini revolution of sorts by showing a red coloured blood like substance dropping onto the pad and thereafter a shot of blood trailing down a women’s legs. The film under the Blood Normal campaign is determined to accord reality and centrality to menstruation.

So, in the final analysis most advertisements don’t really bother to make a case for menstruation. In fact, they reinforce and validate the notions that menstrual cycles are unhealthy, they must be hidden from social discourse and the products are the one and only way to keep that part of life hidden. Barring the Whisper Touch the Pickle advertisement, none of the others bothered to contribute to the conversation surrounding menstruation. 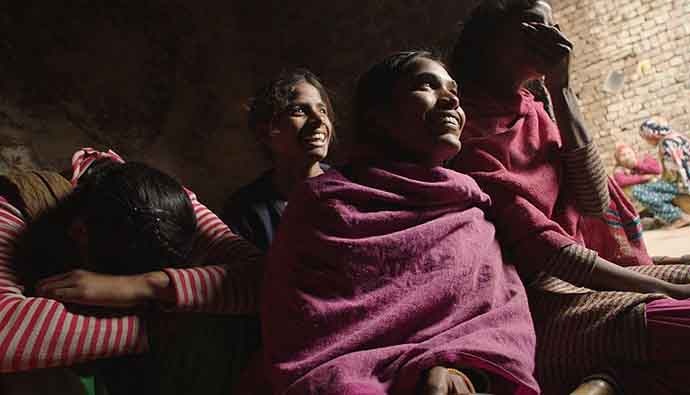 It is high time companies make an effort to stop dehumanising periods. (Source: Period. The End of Sentence.)

Perhaps, advertisement will now take a lesson from Period. The End of Sentence and make attempts to change notions about periods, stop dehumanising it and lift the metaphorical veil from this important part of a woman’s life.

Advertisements need to have men — brothers, fathers, husbands, boyfriends, lovers participating in the storyboards. A normal physiological process used to turn against women and restrict their visibility in social spaces, making them shrivelling, apologetic specimens isn’t quite with the idea of women’s empowerment. Rayka Zehtabchi deserves a huge round of applause for showing us the way, lighting up the road to real empowerment by teaching us to accept and celebrate this life giving force.

While India celebrates the Oscars, we women can perhaps celebrate the end of a Sentence…

#Whisper, #Menstruation, #Periods, #Period. the end of sentence
The views and opinions expressed in this article are those of the authors and do not necessarily reflect the official policy or position of DailyO.in or the India Today Group. The writers are solely responsible for any claims arising out of the contents of this article.