Sorry, but rape is a political issue in India

The government can make a hundred laws to protect women, but it will fail because there is no enforcement.

Prime Minister Narendra Modi, in his much-hyped town hall event "Bharat ki baat, sab ke saath" in London yesterday (April 18), said “rape is rape” and that it should not be politicised.

The nation, however, did not get the chance to ask him in response, "Who is actually politicising rapes in India?"

Having said this, the eight-year old girl's rape and murder in Kathua, Jammu, was primarily to scare away her community, Bakerwals, from that region. And today there is a movement spearheaded by local leaders with the support of two erstwhile BJP ministers of the state to protect the rapists. In this case, rape is a tool for control over resources, a war supported by right-wing politics.

The 16-year-old Unnao girl, who was allegedly raped by a BJP MLA, was violated to show the power of men, on one hand, and of Rajputs over lower castes on the other. And then the rapist is being protected by the Thakur lobby-dominated state government until the Allahabad High Court forced action and that too through the CBI and not state police. 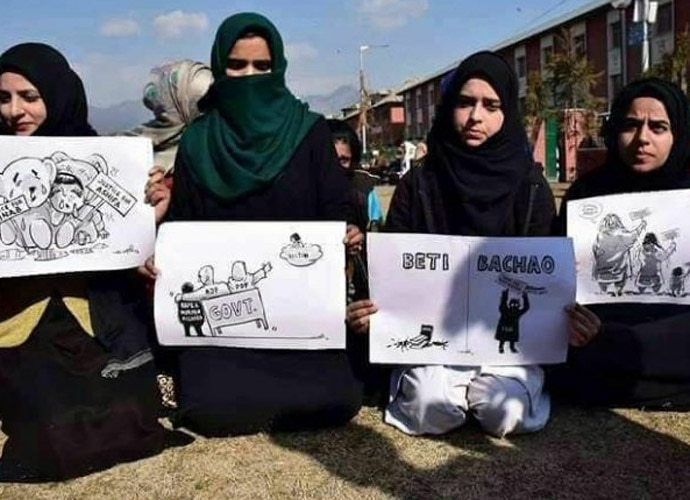 In the past five years, several women have been violated allegedly by the right-wing forces. Either as a tool of sex, or of gender dominion and rights over women, or of caste-communal dominion.

One should first understand that women because of their gender and sexual identity are marginalised. Gender is a social construct. Sex is a biological construct. Both are power dynamics of patriarchy. However, both these identities have multiple marginalisation when it is combined with caste, minority religion, nationality, race, or any marginalised culture. A Dalit woman can be raped not just for being a woman, but for being a Dalit as well.

A few thousands small and big protests were staged after the 2012 Delhi gang rape in which the right wing was rightly involved while the UPA was the target of public ire.

A few hundred protests have erupted now after the Kathua and Unnao cases in which the Congress, the AAP and others are also involved and the Modi govt is the target of public ire. Again rightly so. Politics cannot be disassociated from atrocities on women.

Hundreds of noisy protesters greeted Narendra Modi when he arrived in London on April 18, demonstrating over a rising tide of sexual violence in India. Holding placards reading "Modi go home" and "We stand against Modi's agenda of hate and greed," they gathered outside Downing Street and parliament as the prime minister arrived for talks with his British counterpart Theresa May. The Indian diaspora is upset about his alleged inaction.

A New York City-based Hindu organisation marched to the Union Square, to demand justice for the recent rape victims of Kathua, Unnao and Surat. "The United for Justice rally" on Monday (April 16) was attended by the members of Sadhana. Criticising the ruling government in India for its delayed action, the organisation accused it of supporting the rapists.

The ruling party of India is clearly on the back foot with the strained PDP-BJP alliance in J&K deteriorating further, and the Opposition rallying on this strongly.

It all started with the induction of rape accused Nihalchand Meghwal into Modi's ministry in 2014. A rape complaint filed some time back had returned to haunt the union minister of state Nihalchand Meghwal, the lone MP from Rajasthan to get a berth in Modi's first council of ministers. A lower court had issued summons to 17 people, including Meghwal in a sexual assault case in which he never appeared. The case is still on. And in a later reshuffle, the minister was dropped.

The Uttarakhand Police had booked BJP leader and former state minister Harak Singh Rawat after a complaint on charges of rape and harassment was lodged against him. According to report, the complaint was lodged by a 32-year-old woman at Safdarjung police station in New Delhi.

A 40-year-old woman, who runs an NGO in Karnataka, had accused BJP leader Venkatesh Maurya, national executive member of the BJP SC Morcha, of raping and cheating her on the pretext of helping her get government grants for her NGO.

Earlier, allegations of rape had surfaced against BJP legislator and former health minister Krishnamurti Bandhi in Chhattisgarh. The complaint was filed by a woman who was later found dead in mysterious circumstances inside the premises of Bandhi's aide and former judge, RR Bhardwaj.

For eight years, a girl from Anjala in Punjab said her father raped her. The 21-year-old broke her silence after watching the TV coverage of the recent Mumbai rape-incest case. The girl’s father, BJP leader Ashok Taneja, was later arrested.

There is a rape case now against Vijay Jolly, former BJP MLA in Delhi, filed by a BJP woman worker and the case is on.

Rape cases after Nirbhaya and statistics

A total of 34,651 cases of rape were reported in India in 2015. Out of these, in 33,098 cases, the offenders were known to the victims, revealed the National Crime Records Bureau (NCRB) data. The victims were majorly among the age group of below six years to over 60 years. Madhya Pradesh reported 4,391 rape cases, the highest as compared to other states, with Rajasthan being another major state.

Delhi reported 2,199 such cases – highest among the union territories. It is important to note that Madhya Pradesh is ruled by the BJP for 15 years now, Rajasthan for the past five years. Delhi, though now has an AAP government, reports to the Union home ministry.

As per the data released by the National Crime Records Bureau in August 2016, over 34,600 cases of rape were reported across the country with Madhya Pradesh and Delhi topping the infamous list of states and union territories, respectively. A total of 34,651 rape cases were reported in India in 2015. Among these, in 33,098 cases the offenders were known to the victims.

India launched fast-track courts and a tougher rape law that included the death penalty after a gruesome assault on a young woman shocked the country in 2012, but crime statistics indicate the situation has got worse, not better, since then.

The data was collated by Reuters amid mounting public anger over crimes against women after the last two horrific cases in Kathua and Unnao that has once again cast a bad light on the systemic problems plaguing the country's police and courts.

Statistics show that since 2012, reported rape cases climbed 60 per cent to around 40,000 in 2016, with child rape accounting for about 40 per cent. The conviction rate of people arrested for rape remains stuck around 25 per cent. The backlog of rape cases pending trial stood at more than 133,000 by the end of 2016, up from about 100,000 in 2012, National Crime Records Bureau data showed. In each year during that period, about 85 per cent of the total rape cases being heard remained pending.

What ails the system in rape cases?

In general, conviction rates for crime against women - deaths following demands for dowry, assault, kidnapping as well as rape - are lower than for most other crimes.

A study by the National Law University in Delhi found that 43 death sentences were handed down for murder involving sexual violence in 2017, almost double the previous year's number.

A study by Kailash Satyarthi Children's Foundation, whose founder shared the 2014 Nobel Peace Prize, reckoned that as of 2016-end, the backlog of child sex abuses cases in the courts would take two decades to clear.

Under India's Protection of Children from Sexual Offences Act passed in 2012, which covers victims under 18 years, police should collect evidence within a month of the complaint being filed and the court should complete a trial within a year, and this has been flouted in most cases.

Crime statistics showed that police files remain open for about a third of all rapes that were investigated for each year between 2012 and 2016.

The police force being understaffed is also a major issue. The government told Parliament last month that the police force has a sanctioned strength of nearly 2 million officers, but almost a quarter of those positions were vacant.

Some of the worst accusations against the police stem from cases like the ones in Uttar Pradesh and Jammu & Kashmir, where they allegedly bulked under pressure from people of influence to bury cases.

Vappala Balachandran, a former top police officer in the western state of Maharashtra who has criticised the government's response to the recent cases, described how powerful local politicians stall police investigations.

So far the only policy response to the latest cases has come from Maneka Gandhi, minister for women and child development, who has advocated applying death penalty for rape cases where the victim is under 12 years old.

Currently, the Supreme Court reserves the death penalty for extreme cases, as in the 2012 Delhi case. In February 2017, the Ministry of Health and Family Welfare of India introduced resource material related to health issues to be used as a part of a pan-India adolescent peer-education plan called Saathiya. Among other subjects, the material discusses relationships and consent.

Hence, this is a matter of sheer political will to check the rape epidemic in India. The government can make a hundred laws and yet it will fail because there is no enforcement.

It needs to take this as an epidemic and treat it accordingly, by completely overhauling the police machinery, prosecutors and the judicial system. This political will is missing at the Centre and in most of the states.

Also read: Of course internet existed in the time of Mahabharata

Post your comment
#Crime Against Women, #Unnao-Kathua rape cases, #Politics of rape, #PM Modi
The views and opinions expressed in this article are those of the authors and do not necessarily reflect the official policy or position of DailyO.in or the India Today Group. The writers are solely responsible for any claims arising out of the contents of this article.