Of course internet existed in the time of Mahabharata

If it were left to the BJP leaders, all scientific and technological advancements of our times would be attributed to the Vedas, the Bhagwad Gita, Mahabharata and Ramayana.

For example, Tripura CM Biplab Kumar Deb, while inaugurating a two-day workshop on computerisation of Public Distribution System (PDS) on April 17, claimed: "Internet and satellite communication had existed in the days of Mahabharata. Sanjay [the charioteer of king Dhritarashtra] using the technology gave a detailed account and description to the blind king about the battle of Kurukshetra."

Sadly, he did not stop there. He added: “The Europeans and the Americans may claim that it is their invention, but it is actually our technology. Internet and satellite system had existed lakhs of year ago. How could Dhritarashtra see through Sanjay's eyes? There was technology available at that time... Internet was there, satellite communication was there.” 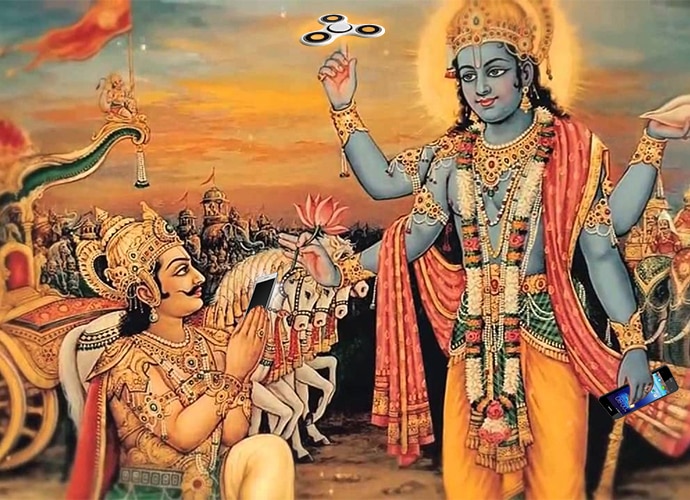 Photographic evidence of smartphones used during the battle at Kurkshetra. [Credit: DailyO]

Of course, it makes complete sense that a BJP leader would utter statements like these. Recently, after the death of world-renowned physicist Stephen Hawking, Union science minister Harsh Vardhan, while speaking at the 105th edition of the Indian Science Congress at Manipur University, said: “We recently lost a renowned scientist, cosmologist Stephen Hawking. He emphatically said on record that our Vedas might have a theory superior to that of Einstein’s E=mc2.” The same Harsh Vardhan also told delegates at the Indian Science Congress in 2015, that Indian mathematicians had discovered the Pythagorean Theorem and graciously allowed the Greeks to take credit.

And how could one forget the "contributions" of Dinanath Batra, the convenor of Shiksha Bachao Andolan Samiti and an active advocate of saffronisation of the Indian education system, who once claimed: "America wants to take the credit for the invention of stem cell research, but the truth is that India’s Dr Balkrishna Ganpat Matapurkar has already got a patent for regenerating body parts. You would be surprised to know that this research is not new and that Dr Matapurkar was inspired by the Mahabharata. Kunti had a bright son like the sun itself. When Gandhari, who had not been able to conceive for two years, learnt of this, she underwent an abortion. From her womb a huge mass of flesh came out.

(Rishi) Dwaipayan Vyas was called. He observed this hard mass of flesh and then he preserved it in a cold tank with specific medicines. He then divided the mass of flesh into 100 parts and kept them separately in 100 tanks full of ghee for two years. After two years, 100 Kauravas were born of it. On reading this, he (Matapurkar) realised that stem cell was not his invention. This was found in India thousands of years ago."

It is only fitting that the Tripura CM and the jingbang would utter such pronouncements following in the footsteps of their boss Prime Minister Narendra Modi, who in 2014 while speaking at a function in Mumbai, had said, "We can feel proud of what our country achieved in medical science at one point of time. We all read about Karna in Mahabharata. If we think a little more, we realise that Mahabharata says Karna was not born from his mother’s womb. This means that genetic science was present at that time. That is why Karna could be born outside his mother’s womb. We worship lord Ganesha. There must have been some plastic surgeon at that time that got an elephant’s head on the body of a human being and began the practice of plastic surgery."

Thankfully, the Tripura CM’s hogwash was met with nothing but incredulity and a healthy dose of facepalm.

And, then Babur refused to pay the electricity bill & it was disconnected. https://t.co/4AMiAUDgLF

internet existed in the mahabharata era, says Tripura CM. so did gaanja

LITERALLY have no words! https://t.co/uWal3qoex0

BJP's TripuraCM BiplabDeb echoes Modi&claims that internet& satellites existed in time of Mahabharata! Remember Modi claiming that we had plastic surgery in ancient India since Lord Ganesh's trunk was engrafted by plastic surgery!Must be given Nobel prize! https://t.co/MolGD5vTDA

Then Nehru didn't pay the bill and the line got disconnected ???? https://t.co/qzoVUdN7UQ

And once the floodgates opened, it inevitably led to many reimagining the tales of Mahabharata with an added layer of internet.

Krishna providing the right filter for Draupadi to capture the perfect aesthetic of the Vastraharan on Instagram. #MahabharatOnTheInternet. pic.twitter.com/sDMn76b6su

Internet and use of Skype in times of Mahabharata, Bhakts should RT this proudly ???? pic.twitter.com/KOqaTgCeFq

here is the proof of that, sanjay showing the battle of mahabharata, live on his new macbook air, to dhritrashtra. pic.twitter.com/AEz2zmOSlm

Pandavas checking thier twitter notifications.Yudhishthira is angry with the low 4G range in Indraprasta.#InternetMahabharata pic.twitter.com/0it8FnOTPO

#InternetMahabharata chronicles:During the days of Mahabharata, there was a social media site called as Mukhpustak which was founded by Markand Zuckeracharya. People used to regularly update their status like 'visting hastinapur' , 'having lunch with pandav brothers' etc.

Historian Audrey Truschke - the author of Culture of Encounters: Sanskrit at the Mughal Court and Aurangzeb: The Man and the Myth - went ahead to do an entire thread on this.

Ekalavya tried to sign up online for Drona's workout class, but it was full. He asked Drona to give him special permission to join, but Drona said no. Ekalavya said, no problem, he decided to workout using pirated YouTube videos of Drona instead. #InternetMahabharata #Mahabharata

But, you know, the internet wasn't always so robust. In the early days of the Mahabharata, it was pretty rudimentary. That's how Karna got talked into giving his armor to Indra - like the days of AOL chatrooms when you didn't know who anyone was #InternetMahabharata #Mahabharata

I still feel that the Pandavas could have used the internet more to their advantage. Like, what if they had ponied up the cash for one of those nanny cams that you can stream online? Could've prevented the brutal night attack. #InternetMahabharata #Mahabharata

Sometimes it was a good idea to stay offline though. One time, after the War, Yudhishthira was wavering whether to be king. His brothers suggested that he do an online poll to see what the people wanted. Yudhishthira declined because monarchy. #InternetMahabharata #Mahabharata

I only wish that they'd had the internet in the times of the Ramayana. Then Hanuman could've saved a lot of trouble carrying that whole mountain by just searching "sanjivani herb" on google images. #InternetMahabharata #Mahabharata

The Mahabharata was originally told in a tweet thread. It was Vyasa who put the whole thing on Storify, with the help of Ganesha because, well, we've all been there with helping grandpa with the internet. #InternetMahabharata #Mahabharata

For the record, the first workable prototype of the internet came in the late 1960s with the creation of ARPANET, or the Advanced Research Projects Agency Network, that was funded by the US Department of Defence. ARPANET adopted TCP/IP - Transmission Control Protocol and Internet Protocol - on January 1, 1983, and from there researchers began to assemble the “network of networks” that became the modern internet.

The online world, as per History.com, "took on a more recognisable form in 1990, when computer scientist Tim Berners-Lee invented the World Wide Web".

Satellites, not the natural but man-made ones, on the other hand, were the now-dissolved Soviet Union’s gift to the world. After all, the world’s first-ever satellite - Sputnik 1 - was launched on October 4, 1957 by the Soviet Union.

The irony of a BJP leader, whose party ended Tripura’s 25-year-old Left rule, giving Mahabharata the credit for something that came out of history’s most famous communist union is one that’ll probably be lost on Biplab Kumar Deb.