It is Pongal in Tamil Nadu and the sweet dish intrinsically associated with the festival is a sheer delight to your tastebuds. Pongal 'O Pongal!

Today is Makar Sankranti that coincides with the Tamil festival Pongal, marking the end of the harvest season in South India. One of the biggest festivals in the state, Pongal cuts across religion, caste and class in Tamil Nadu.

The word ‘festival’ comes from the Latin word festa that literally means ‘feast’. So, obviously, the feast is the centrepoint of any festival. More so in Pongal, where the name of the festival is part-eponymous with the name of the central dish. The sweet pongal or the Chakkarapongal (yes, there is also a savoury pongal called Venpongal) is made by cooking freshly-harvested rice, lentils in milk, and jaggery. The milk is allowed to overflow to signify the agricultural abundance after the harvest. Of course, the garnishing of dry fruits and lots of ghee complete the flavour of the Chakkarapongal (alternately spelt as Sakkarapongal). The dish is traditionally made in a heavy-bottomed brass or terracotta pot. You can try making it in whatever heavy-bottomed vessel you have.

We share the recipe with you with the wish that the coming year is as sweet and overflowing with abundance for you. As they say in Tamil Nadu, “Pongal’O Pongal!” 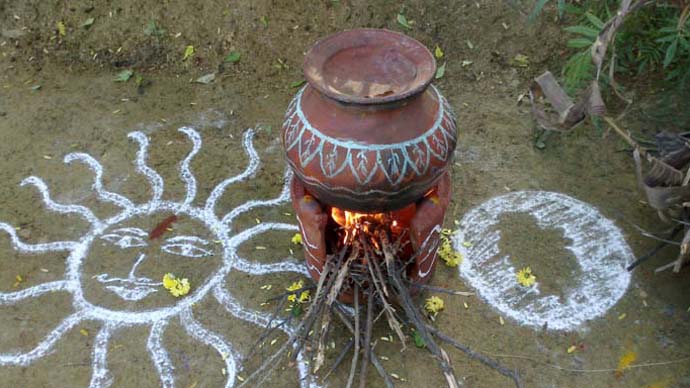 The traditional setting of making the Chakkarapongal. (Photo: Wikimedia Commons)

Some pointers before you start:

• The ratio of rice and lentils to jaggery is one measure of rice, half a measure of lentils and two measures of jaggery.

• Ensure you don’t cook the dish on high flame once you add the milk as it will char the bottom and ruin the dish.

One cup of rice

One cup of milk

Cashew nuts and raisins for garnishing 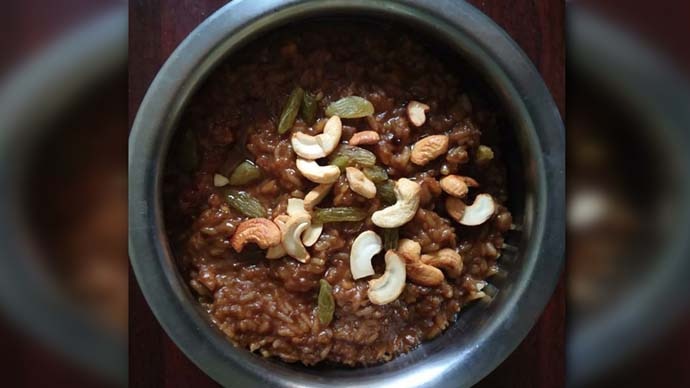 Dry-roast the dal in a pan till it gives out a distinct aroma of being roasted. Mix the rice and dal, and wash it well. Set aside and soak in water for about half an hour.

In a heavy-bottomed vessel, add a teaspoon of ghee, the milk and bring it to a boil.

Once it boils, simmer it and add the rice and lentils after completely draining the water. Let it cook on medium flame.

Once it again starts boiling over, add a cup of water, cover it and let it cook. Keep opening and stirring every few minutes so that the bottom does not char. Also keep adding water, a little at a time, allowing the mixture to cook well.

Once the milk and water have been completely absorbed by the rice and lentils (which should have cooked to a very soft consistency), add the clean-powdered jaggery along with half a cup of water.

Mix it well and allow it to cook further on low flame for another minute or two. Take it off the flame. Add the cardamom powder. In a separate small frying pan, add the remaining ghee and fry the dry fruits. Add this to the Chakkarapongal and cover for a few minutes allowing the flavours to seep in.

Serve it warm with a dollop of ghee.

Also Read: Make Lohri a happy one with Aata Laddoo

#Harvest festival, #Chakkarapongal, #Pongal, #Dailyrecco
The views and opinions expressed in this article are those of the authors and do not necessarily reflect the official policy or position of DailyO.in or the India Today Group. The writers are solely responsible for any claims arising out of the contents of this article.