Rahul Gandhi compares lynching in India with the rise of ISIS. So what?

Gandhi's style of speaking often feels like he is trying to explain things in the simplest possible terms to his audience, taking a leaf from how someone explained those things to him.

Congress president Rahul Gandhi's foreign tours are known to keep both social media users and journalists (many of whom are also social media users) on the edge. Whether Gandhi goes untraceable after taking off from India or emerges at some platform abroad to speak, like he did in Germany, a lot of interest is manufactured around his visits. Rahul Gandhi attacked the BJP government over the dismal job growth in the country (Source: Twitter)

The speech in Germany, which is now 'the most important thing that India needs to discuss', is an everyday example of how empty our political discourse has become.

Politicians make political speeches because it is their job. In the process, they lie through their teeth, obfuscate facts and vitiate the atmosphere. Leaders of the opposing camp then counter the 'facts' made in the speech with 'counter-facts'.

What has come under attack in Rahul Gandhi's address made before a gathering at Kampnagel Theater, Bucerius Summer School, Hamburg, Germany as part of the party's NRI outreach programme, is the comparison he drew between the rise of ISIS and instances of lynching being reported from across the country.

In short, what Gandhi tried to tell not just NRIs, but also the foreigners gathered at the event, was that the government's failure to create jobs and its destructive policies such as demonetisation and the faulty implementation of the GST, which claimed a lot of jobs in the small and medium sector had led to discontent among the unemployed youth — also leading to many people losing their businesses. He went on to warn that such discontent among youths leads them to participate in incidents such as lynching.

He then rushed into explaining the rise of ISIS attributing it to the denial of government jobs to a certain tribal community of Iraq.

Gandhi said, Modi "demonetised the Indian economy and destroyed the cash flow" of all small and medium businesses rendering millions jobless. "They imposed a badly conceptualised GST which complicated lives further," he said.

"In the 21st century, when the world is connected, it is very dangerous to exclude people. When the US attacked Iraq in 2003, they introduced a law that didn't allow one particular tribe from getting public jobs... It was easy for the US to take down Saddam Hussein within a few months without much casualty. But, a few months later, the network that was excluded from jobs in Iraq, the Tikriti tribal network, linked up with a cell phone network and the network of artilleries left in villages, and what you got was an insurgency that fought the US and caused massive casualty. It didn't stop there, but slowly entered empty spaces, in Iraq, in Syria, and connected with the global internet to form the horrific idea — ISIS," Gandhi said. 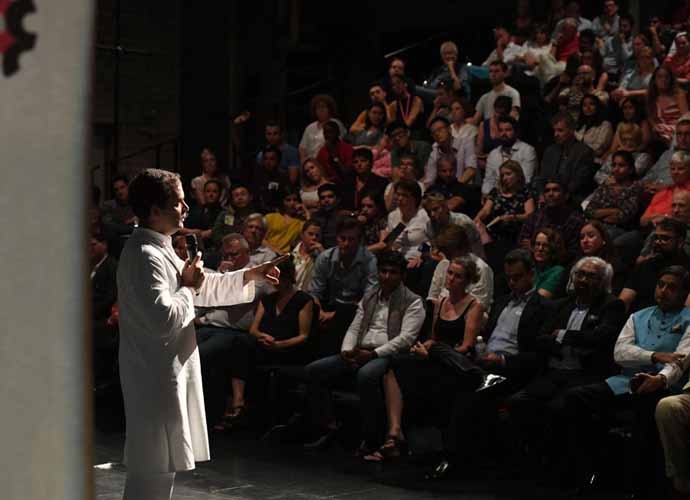 Rahul Gandhi was in Germany as part of the party's NRI outreach programme (Source: Twitter)

Gandhi's style of speaking often feels like he is trying to explain things in the simplest possible terms to his audience maybe taking a leaf from how someone explained those very things to him. That, however, is a matter of pure conjecture.

While when Rahul Gandhi will gain the maturity to understand the complexities of politics and political speeches remains a matter best left to time, the BJP has succeeded in giving the speech a spin calling it a justification of the ISIS and extremism.

By making it a communal issue linked to the national security, BJP does not have to answer on the other issues of joblessness and discontent raised in the speech.

It is not without a reason that children are seen begging on the streets of the national capital and the state of education is so bad that many can't read and write despite attending schools. Real issues facing the common man are not saleable commodities.

And therefore this needless debate — over whether the rise of ISIS in Iraq and Syria and lynchings in India have a link — must go on.

Also read: Why he hugged PM Modi, to the dangers of exclusion: What Rahul Gandhi said in Germany

Post your comment
#Lynching, #ISIS, #Rahul gandhi in germany, #Rahul Gandhi
The views and opinions expressed in this article are those of the authors and do not necessarily reflect the official policy or position of DailyO.in or the India Today Group. The writers are solely responsible for any claims arising out of the contents of this article.