Political point making aside, legally the government is bound to follow court orders on Ayodhya

With Assembly elections coming in several states, and the all-important Lok Sabha elections just months away, the decision of the Supreme Court to adjourn the hearing in the Ram Janmabhoomi-Babri Masjid land title dispute has allowed ‘mandir-masjid politics’ to come back under the spotlight.

Days after the demand for the government to step in and bring a law to build Ram temple was raised by some seers and members of the Vishva Hindu Parishad (VHP), fuel was added to the political fire on Thursday, November 1, by a tweet put out by the RSS ideologue and member of Parliament, Rakesh Sinha, in which he asked if the Opposition parties will support him if he brings a private member’s bill to build the temple.

Away from vote bank politics, legal and constitutional experts say that it would be “grossly improper” for the government to try and bring in an ordinance at this stage, especially since the land dispute is before the Supreme Court for final hearing.

Former solicitor general Mohan Parasaran told India Today that it would be “ill advised” for Parliament to interfere at this stage.

Constitution expert Subhash Kashyap has also said that while bringing an ordinance on a sub-judice matter is not legally barred, it is not done as it would be improper.

When it comes to private member bills, there are also legal and procedural hoops to pass through.

According to the Rajya Sabha Handbook for Parliamentarians, available on the Rajya Sabha website, “The subject of the Bill should relate to the subjects included the Union or Concurrent List contained in the Seventh Schedule of the Constitution of India.”

Under the Constitution, land is a subject under the state list, and not in the Union or Concurrent List. Rakesh Sinha, if he brings a bill, will have to first convince the Rajya Sabha chairman to allow his bill to be introduced following which a parliamentary debate can start.

What is more important is the fact that the Centre has already been down the “ordinance and legislation” route once, and there is a Constitution bench judgment of the Supreme Court, which clearly laid down the limits to which the government can go. Experts believe the government should wait for the Supreme Court verdict in the Ram Mandir-Babri Masjid dispute. (Source: India Today)

The Supreme Court gave an extensive judgment in the matter.

In September 2018, the Supreme Court refused to revisit the Ismail Farouqui judgment, and the ‘Hindu side’ labelled it a victory. Ironically, it is this very judgment that stands in the way of any action by the government.

The statement of objects and reasons in the 1993 Act said: “As it is necessary to maintain communal harmony and the spirit of common brotherhood amongst the people of India, it was considered necessary to acquire the site of the disputed structure and suitable adjacent land for setting up a complex which could be developed in a planned manner wherein a Ram temple, a mosque, amenities for pilgrims, a library, museum and other suitable facilities can be set up.”

The five-judge Supreme Court bench in the Farouqui case very clearly held that while they were not striking down the Act, the “status of the central government is, of a statutory receiver in relation to the disputed area, coupled with a duty to manage and administer the disputed area maintaining status quo therein till the final outcome of adjudication of the longstanding dispute relating to the disputed structure at Ayodhya.”

In plain terms it meant that while the government was allowed to acquire the land, the court made it clear that the responsibility of the Centre was only to ensure that the property remains frozen till the title suit hearing pending before the court is concluded. The court had also held that “the central government would bind itself to hand over the place of worship to the party in whose favour its title is found.”

The Supreme Court verdict regarding the freeze on the disputed land was reaffirmed by a five-judge bench in Mohd Aslam alias Bhure vs Union of India in 2003, in which it said categorically that “no part of the aforesaid land shall be handed over by the government to anyone and the same shall be retained by the government till the disposal of this writ petition nor shall any part of this land be permitted to be occupied or used for any religious purpose.” 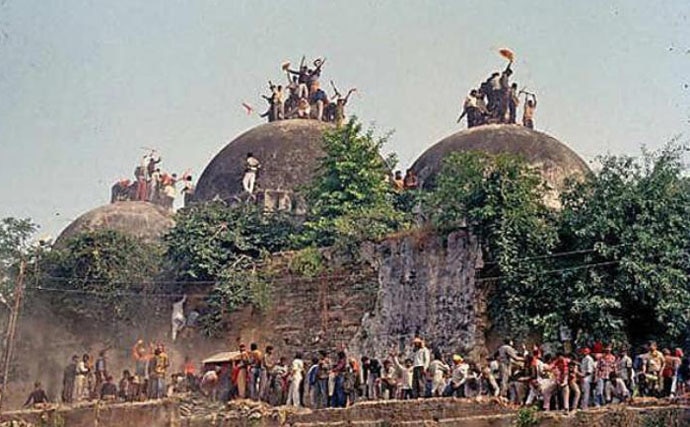 The Babri Masjid being demolished in Ayodhya. (Source: India Today)

Since these orders have never been challenged by the Centre, and the government vehemently opposed the plea to revisit the Farouqui judgment, it cannot now go against the verdict and “hand over the land” to “Ram Lala” as is being demanded by some sections.

With the principle of secularism clearly defined under the Constitution, the government cannot even buy the land or spend funds to build the temple.

Adding to the irony is the fact that the BJP government had itself used the Article 27 argument before the Supreme Court last year to say that the government could not be asked to pay for repairs and renovation of mosques, dargahs and other places of worship that had been damaged during the 2002 Gujarat riots.

In the State of Gujarat vs IRCG case decided in August 2017, the BJP-led Gujarat government had told SC that “the funds of the state cannot be directed to be used for ‘maintenance’ [which includes repair/ restructuring/ construction] of any religion.”

The government had also cited the 1954 Shirur Mutt case, which had read, “Ours being a secular state and there being freedom of religion guaranteed by the Constitution, both to individuals and to groups, it is against the policy of the Constitution to pay out of public funds any money for the promotion or maintenance of any particular religion or religious denomination.”

With the law being clear, the government has no choice but to wait for the Supreme Court to pass a judgment on the land title suit.