DailyOh! When Amitabh Bachchan sent a truckload of roses for Sridevi to cat that helped in jailbreak

The love week has started but where did the word love come from?

It’s Friday, and for many parts of the world, the week has come to an end but for many others, Saturday would mark the beginning of the week. In India, at least, the week has drawn to an end. Now, whether the week is ending or beginning for us, Friday marks the start of the Valentine week.

If you are one of those who think the Valentine week is a drag on your pockets, you have only yourself to blame because you haven’t figured out economical ways to celebrate. And blame yourself some more if you have chosen a partner who forces you to spend more as a proof of your love.

Just kidding. If only there was a way to skip through the week and shops that have red hearts dangling from their ceilings to announce the Valentine week, we would totally skip it. But since there is no such way, we would try to sail through it all as best as we can. And we are extremely sorry to be hurting your feelings if you are the kinds who had been looking forward to this week.

So, what’s so special about the week?

It will have all that Hug Day, Kiss Day, Teddy Day, Propose Day, this day, that day. It will also have Monday, Tuesday... the usual way. And it all began today with Rose Day.

What happens on Rose Day? Each rose sells for Rs 150 and above — and it doesn’t smell, at least not like a rose does. That is if you buy it from a not-so-posh market. But what do you do with the rose? Well, you buy it and give it to the person you are dating or wanting to date. In the latter case, we suggest you buy a whole bunch.

Amitabh Bachchan, on his part, bought a whole truck of it. No, he wasn’t celebrating Rose Day. He did it for Sridevi because Sridevi had refused to work with him.

At one point in her career, Sridevi began to feel that working with Amitabh gave her little scope to show her talent in a film. So she refused to work with him.

When the plot of Khuda Gawah (1992) came before Amitabh, he grew desperate to have Sridevi share screen with him. To woo Sridevi, one day Amitabh sent a truckload of roses to where the actor was shooting. They made Sridevi stand next to it and the whole carrier was titled over her. And the roses did the trick. Sridevi agreed to work with Amitabh — but on one condition. She said she would only be a part of the film if she got to play both Bachchan’s wife and daughter. 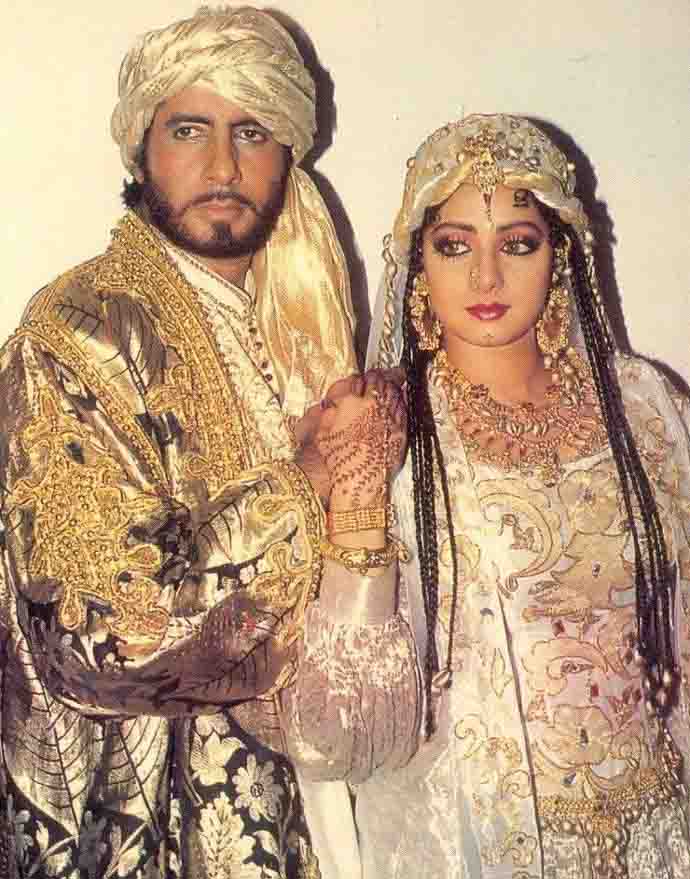 Amitabh Bachchan so badly wanted Sridevi to work in Khuda Gawah that he sent a truckload of roses to impress her. (Source: Reuters)

No heroine had dared to demand a double role in an Amitabh movie till then. Sridevi dared and got it too.

Sorry about the digression. We were talking about Rose Day, which is how the ‘love week’ begins. And since love week has begun, love is our Word Of The Day.

Love originates from the Middle English word ‘luf’, derived from the Old English word ‘lufu’. The word ‘love’ is also known to have its roots in the Sanskrit word ‘lubhyati’, which means ‘desire’. Oxford dictionary defines love as a very strong feeling of liking and caring for somebody/something.

You know but things can get so complicated when people mistake the presence of liking, or caring, or both, as love. Let’s just say love is difficult to define. Even poets find it easier to tell what love is not or what (being in) love feels like than what love is. We won’t try to give you our two pence on love.

It’s easier to pass through the love week with all its gaudiness than sit down to define what love is. Best to say it is something you feel. Now, what you feel is what you feel. Why spoil it with definitions.

But we do hope you stay loved in the years that follow the week we are in.

In all this talk of love, love week and Rose Day, we forgot to tell you that troubles for two former chief ministers of Jammu and Kashmir has increased. Wondering why?

That’s because Omar Abdullah and Mehbooba Mufti have been booked under the Public Safety Act by the Indian government. The two have been under detention since August 5, 2019, when Article 370 was scrapped from Jammu and Kashmir and Jammu and Kashmir was bifurcated into two Union Territories. Narendra Modi says a lot of progress has happened in the state of J&K since then. Sorry, the UT of J&K since then. But for Abdullah and Mufti, azadi is all elusive. Omar Abdullah and Mehbooba Mufti have been under detention since August 5, 2019. (Photo: Twitter)

Imagine it’s been six months since they have been in detention and now with PSA they can be held under arrest for two years. Omar’s father Farooq is already in arrest under PSA. Farooq must be regretting the day he introduced the PSA law in the state. He did that to crack down on the timer mafia. If only he knew, it would one be used against him and his son.

We wonder how strongly people under arrest would want to escape.

That thought reminded us of how a cat was used by a convict to flee from jail. Let us tell you the story in some detail and for that let us take you to 1986.

In 1986, serial killer, aka Bikini Killer, Charles Sobhraj was lodged in Tihar Jail. In jail No. 3 of the prison, some prisoners discovered a cat lying unconscious in a corner. It was breathing, but unconscious. Nobody could figure out what was wrong with the cat. Some warders started taking care of it. Around the third day, the cat began to walk even though somewhat uncertainly.

Over the next couple of days the cat recovered completely and it then struck the jail authorities that the cat was a pig. Not really a pig, pig but a guinea pig that was used by Sobhraj to test the efficacy of the new sedative that Sobhraj’s friends had smuggled to him in jail. Sobhraj tested the drug on the cat and once convinced about the right dose, he used it on jail wardens and fellow inmates to escape prison.

Sobhraj was being extra cautious because in an earlier instance when he tried to escape from Kabul (Afghanistan) to Tehran (Iran), he miscalculated the dose and ended up killing a Pakistani taxi driver.

Sobhraj is now 75 years old and currently serving a life sentence in Nepal. We wonder if he still has it in him to escape prison.

A BBC seven-part series on the life and crimes of Sohbraj will be out on Netflix this year. The series is called The Serpent, a title inspired by one of the many names Sobhraj earned for his notoriety.

Letterman was most recently in news for his show My Next Guest Needs No Introduction where his guest most certainly needed no introduction. Who was his guest? Shah Rukh Khan.

But we were talking about Tarantino threatening Letterman. So it all started after 72-year-old Letterman’s reaction to a guest's revelation that Tarantino was dating a famous star. Letterman said the star was "so famous that I can't recall the name".

We say, that was funny, but Tarantino didn’t agree with us. He instead called up Letterman and threatened to kill him. Anger can get the better os so many of us. Like it got the better of Raj Kapoor and Dilip Kumar.

The two actors couldn’t see eye to eye. And it all began with Andaaz (1949). Director Mehboob Khan had managed a coup in terms of getting the two big actors in the same movie but the two actors got into a contest of showing they were better than the other. After this, the two never worked together. Dilip Kumar and Raj Kapoor in a still from Andaz.

Kapoor is reported to have offered Sangam (1964) to Dilip Kumar but the latter refused to come on board. But when Raj Kapoor died in 1988, it is said Dilip Kumar was inconsolable. Now, that is why they say not to hold grudges forever. They say it because it is easier saying it than doing it.

But we can certainly try.

On that note we leave you for today. We will be back on Monday.

PS: If you are a Delhi voter, you can cast your vote on Saturday but if you are deeply disappointed in the politicians and don’t want to vote, we can say, you can’t be blamed for feeling so.