While Giriraj Singh found himself suffering from yet another bout of verbal diarrhoea, Hong Kong has run out of toilet rolls.

We hope that you have managed to remain unaffected by all the hate speech going on in the country. By unaffected we do not mean that you are not updated, we just hope it hasn't left you too deeply disturbed or led you to serious verbal fights with friends and family. You know people these days are even ending relationships over such differences. Now, we don't say ideological differences don't count, but ending friendships over what Narendra Modi says or what Rahul Gandhi thinks may not be a great idea. Or over what Union minister Giriraj Singh said about the Shaheen Bagh protesters.

Singh actually didn't say it as in say it. He tweeted that squads of suicide bombers are being readied at Shaheen Bagh.

But as we read Singh's tweet, we began thinking about suicide bombers. Yes, suicide bombing was institutionalised as a terror tactic by the Liberation Tigers of Tamil Eelam in Sri Lanka (yes, the same LTTE who were behind the assassination of former Prime Minister Rajiv Gandhi), but the first act of suicide bombing happened on March 1, 1881. The victim was the Tsar of Russia, Alexander II. Ignacy Hryniewiecki, who threw the bomb at Alexander II, outlived his victim by a few hours. Both eventually died the same day.

There, however, has also been a suicide attack in which the attacker survived (the attack, not the punishment). The world's first failed suicide bomber was Russian poet Ivan Kalyayev. The explosion killed the Grand Duke Sergei Alexandrovich, but not the bomber. Kalyayev, who was caught from the crime scene, was later hanged till death. Now, going by the definition of suicide attack, some can argue that this was no suicide attack. Because there was no suicide.

But let us first tell you the definition of a suicide attack.

But suicide per se is a taboo word in India. But we think it is important to break that taboo because 37 per cent of all global suicides among women, and 24 per cent among men, are in India.

According to a study by The Lancet, suicide deaths in India increased from 1,64,404 in 1990 to 2,30,314 in 2016, an increase of 40.1 per cent. So, you see how big the problem is. And when a problem is this big, it needs to be talked about so that we don't hold it as a taboo subject. Suicide thus is our Word Of The Day. The word suicide breaks down into the Latin words sui and caedere, which together translate to "kill oneself".

However, not all suicides are about the end of life. For instance, a politician can commit political suicide by speaking publicly about a politically 'forbidden' topic. You know, like a Congressman speaking against Rahul Gandhi or a BJP person criticising Amit Shah publicly. A slip of tongue too could prove politically fatal (even if hate speeches enrich political careers).

One may also survive a slip of tongue. But three people died and 179 were injured when a plane skid off a runway in Turkey today. You may be wondering how. Well, the runway was wet. The plane that was flying into Istanbul skid for 50-60 metres and broke into three pieces. 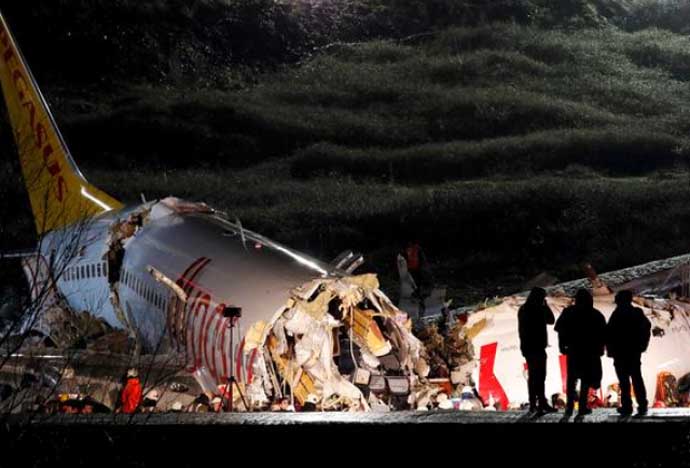 The plane that skidded off the runway in Istanbul killing three people. (Photo: Reuters)

You can read the full details of that tragedy here.This tragedy reminded us of a graver tragedy that took place in 2007. The runway was responsible there too. Do you know how many people died in that disaster? 199.

The plane was going from Porto Alegre to São Paulo in Brazil. On the evening of July 17, 2007, the Airbus A320-233 overshot the wet runway during moderate rain and crashed into a nearby TAM Express warehouse, next to a Shell filling station. The plane exploded upon impact and the 187 people onboard were killed instantly. Another 12 people working on the ground died too.

Here's a video of that crash, recreated, if you want to see:

Plane accidents are so scary. Chances of survival are so rare. Quite understandable why so many people sit reciting prayers in planes.

Reciting of prayers reminds us that reciting of Hanuman Chalisa could be the favourite for Indians who pray. Are you wondering how we arrived at that conclusion? No, not Arvind Kejriwal, we trusted Alexa on this one.

So, we all know that Alexa is known for on-demand music and according to Amazon, the most requested song in 2019 was Hanuman Chalisa - which was requested more than 4 times in a minute!

And people are loving Alexa. In fact, not just loving, they seem to be in love with Alexa. Why else would they say "Alexa, I love you," once every minute? We have no answers to that. This has left us as surprised as probably it has done you. But we say, as long as people are talking love not hate, "Alexa, keep it going."

Hong Kong has run out of toilet papers. Some say the problem is because of rumour-mongering, but for others, the problem is really serious. Now, for many in India, this is no problem at all because they say why use paper when there is water. 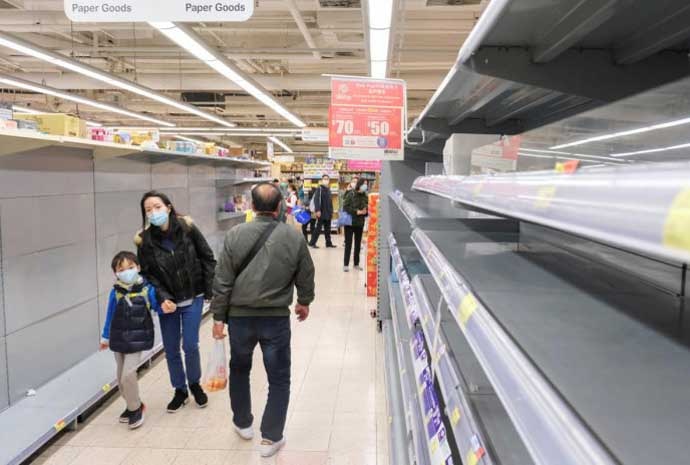 To them we say, we are all creatures of our habits. So, people used to using papers definitely are in deep sh*t, literally.

The first country to have used toilet paper was China, where those who were rich had several types of soft, stylised and perfumed toilet paper.

Finally, American inventor Joseph Gayetty discovered commercial toilet papers. It is said Gayetty was so impressed with his discovery that he got his name on the product. And you were thinking who would want their name on a toilet paper!

The product was a commercial disaster because of its high cost. But it inspired others to make toilet papers. Our bathroom habits in India though are still a little better off, we would say. It's more hygienic, you'd agree.

Since we're on water, remember there was a time Tiger Shroff spoke a lot about water conservation when (because) his film Baaghi was about to release? Well, it is time for Baaghi 3 now. Tiger & Co. dropped the trailer of their third Baaghi today. He has now moved to the desert where water anyway is scarce and, what do we say... watch it for yourself.

Now decide who to aim that bazooka at: the director or the cast.

You'll probably need the rest of the day to get over this. Take your time. We will see you tomorrow.