'Why would I want to undress a society that's already naked?': Nandita Das on what Manto would still say of our times

Nandita Das first went to Cannes as a member of the main jury in 2005 and then again in 2013 in the short film jury. The celebrated actor's second film, Manto, now finds pride of place in the Un Certain Regard section of the Cannes Film Festival. Introduced by former festival director Gilles Jacob in 1978, the section runs parallel to the competition section and is meant to celebrate movies "from another point of view".

It's the kind of cinema India Today Conclave also celebrates and in 2017, we commissioned Das to make In Defence of Freedom, a short film where the fiery Manto (played, as in the film, by Nawazuddin Siddiqui) gives a speech explaining what freedom of speech means to him.

Here, Das talks about on her short film, In Defence of Freedom, Manto and his continuing relevance to our times, and the importance of the Cannes Film Festival that begins on May 8.

1. What does it mean to have a film at Un Certain Regard at Cannes, a festival where you’ve been as a member of the jury? Why is Cannes so important?

Apart from it being the most celebrated festival, it truly manages to combine great cinema with filmmakers and film lovers from all over the world. Sadly in India, we write more about the red carpets and designer outfits, but there is much more to it. Over the years, I have seen some incredible films, I have had some very interesting conversations about film and life and did wish for Manto to start its journey in Cannes. I was most delighted to know on April 12, the day they announced the official entries, that Manto was in Un Certain Regard.

It is one of the two main sections in Cannes, the other one being the main competition section, which does have far more glitz but it is said that Un Certain Regard has the gems! Which actually makes it more daunting as I am sure some of the best films are in this section. In India, when people talk about festivals, often they are either full of awe or full of disdain. We have either made festivals a benchmark to gauge the film’s credibility or have pushed it into a niche where only pretentious arty people meet. Without sounding judgmental, often these comments are from people who haven’t been to any festival because those who have would know that most festivals are nothing more than a gathering of cinema lovers, where you watch films from around the world, meet a cross section of people, and have a good stimulating time. And for that, Cannes is the ultimate haven.

2. What does Manto mean at this point in India's history?

The deeper I delved into this project, the more and more convinced I became about the relevance of Manto in these times. In fact, it seems not much has changed. Almost 70 years after Manto’s times and Partition, we are still grappling with the issues of freedom of expression and struggles of identity... in fact, (issues) have probably worsened - be it that of religion or of nationality. Even today, our identities are inextricably tied to caste, class and religion as opposed to seeing the universality of our common human experience. Silencing creative expression is becoming the order of the day.

I know Manto would have had much to say about the times we live in. His sharp pen and astute insight would have made us realise how intolerant, regressive and divisive we are becoming as people. He was relevant then and, sadly, will continue to be for a long time.

3. Why did you choose to make this film?

I first read Manto when I was in college. A few years later, I bought the complete original works in a collection called Dastavez, in Devanagari. I was struck by his simple yet profound narratives and the way he insightfully captured the people, politics and times he lived in. He wrote as he saw, as he felt, without dilution, and with a rare sensitivity and empathy for his characters.

For years I thought of making a film based on his short stories, even before I made my directorial debut, Firaaq. In 2012 when I delved deeper into his essays, they helped the idea expand beyond his stories.

Today I feel equipped, both emotionally and creatively, to tell this story that so needs to be told.

What drew me to the story of Manto was his free spirit and courage to stand up against orthodoxy of all kinds. He was irreverent and had an irrepressible desire to poke a finger in the eye of the establishment, often with sharp humour. 'Manto would lash out even more strongly and would inspire all of us to have more courage.' 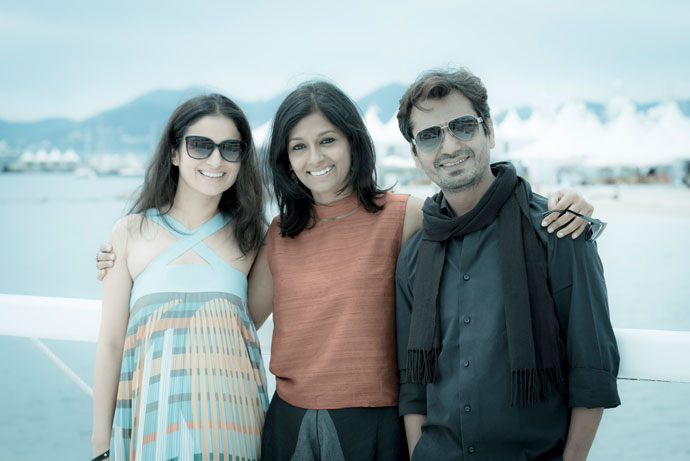 As I plunged deeper into Manto’s life, I wondered why he seemed so familiar. Soon I realised that it felt like I was reading about my father, an artist. He, too, is intuitively unconventional, a misunderstood misfit, and whose bluntness is not too different from my protagonist.

It is his fearlessness and a deep concern for the human condition that I have always felt most deeply connected to. No part of human existence remained untouched or taboo for him. For him, the only identity that mattered was that of being a human.

Manto’s faith in the redemptive power of the written word, through the hardest times, resonates with my own passion to tell stories. In some mystical way, I feel I am part of that hopeful legacy!

Through him, I feel I am able to kindle my own conviction for a more liberal and compassionate world. I feel there is a Mantoiyat, in all of us - the part that wants to be free-spirited and outspoken.

4. When you made the short film for India Today on liberty, did you anticipate how timely it would become?

The idea of making this film started in 2012 and I primarily decided to do this film as a means to respond to what is going on today, particularly in India and the world at large. In fact, when India Today asked me to do the short film, I was in the midst of my pre-production and it was a very busy time for me. But I was also feeling frustrated that I was too absorbed in my film to actively engage with the issues of the time.

And, so despite my hectic schedule, I decided to do the short film, more for my own conscience than anything else. I knew it would be timely. It also turned out to be a good exercise also in bringing the crew together and seeing Manto, the character, come alive. In some ways it was a good rehearsal for us, though today, a lot of people think that it is a trailer of our film and have repeatedly used photos from the short film for the main feature film!

5. What would Manto have said about the times we are living in?

Lots! Though he might have repeated what he said 70 years ago - “Why would I want to undress a society that is already naked? Yes, it is true I make no attempt to cover it but that’s not my job... my job is to write with a white chalk, so that the blackness of the board becomes even more visible.”

Though the only time Manto was unable to write was during Partition. He was so troubled by it that a prolific writer like him had gone silent. Some of his best Partition stories were written much after he moved to Lahore. So it is quite possible that he again would be incapable of writing if he saw the brazen injustices and rampant violence against the vulnerable sections of society. And once he would process it all, I am sure he would have come out with the most heart wrenching stories that would reflect who we are as people.

Or seeing the stifling atmosphere on freedom of speech, and people self-censoring themselves in fear of what might happen to them, Manto would lash out even more strongly and would inspire all of us to have more courage. I can only speculate!

6. How was it to collaborate with Nawaz?

I always had Nawazuddin in mind while writing Manto. They say if you get casting right, 70 per cent of your job is done, and with Nawazuddin that’s exactly what I feel. He looks and feels the part. I brought in my research from books and many gems from Manto’s family, Nawaz brought with him his life experiences and his talent and together I think we have managed to bring out many subtleties and nuances to the character of Manto. Not to mention his natural instincts.

Also Nawaz has many traits that are similar to Manto – deep sensitivity and intensity, and his sudden anger coupled with his sense of humour. And these innate qualities in Nawaz have helped him transition into Manto on screen quite effortlessly.

There have been many magical moments with Nawaz. And I truly feel that our actor-director relationship struck a perfect chord. I think this is so important in a film that largely rests on Manto, the character, and Nawaz, the actor.