DailyOh! Who bought Sachin’s Ferrari, to Ramzan Mubarak or Ramadan Mubarak, what to say?

Let us first remind you that it’s weekend already. So relax and have fun. We just celebrated our resident God’s Jayanti. As in, the only god we can actually see and the only one we have evidence of having listened to people’s prayers. He has touched a billion hearts and whatever he touched turned into gold. When Sachin broke Sir Don Bradman’s record of 29 Test centuries, Fiat presented him with a Ferrari Moderna 360.

A Surat diamond merchant bought the car from Sachin and got more than just the supercar. Jayesh Desai turned a celebrity in Surat and had to shift the car from his Surat home to his farmhouse on the outskirts because everyone wanted to have a peek and touch the red Ferrari the God himself sat in once. Desai also let sawaari Sharman Joshi take the Ferrari for a spin in that 2012 film. That’s the magic Sachin brought to objects because of the affection this country has for his greatness and his golden touch. 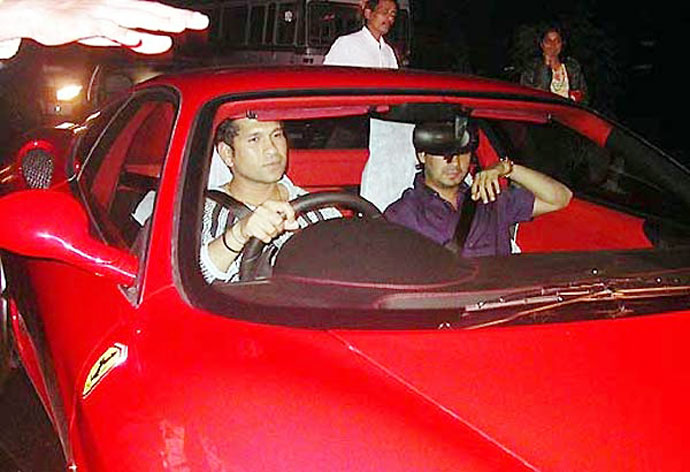 Talking of touch, the curse of the coronavirus is still among us and the moronavirus is compounding the curse. Donald Trump is our Covidiot Of The Day and the strongest contender for the Covidiot Of The Year. He is the President of the United States, the coronavirus’s biggest victim country so far. He continues to spout inanities and spurious cures for the virus. He finds a scientific thread and uses it to spin his own theories. The problem is he has fans and followers who lap up every word and we end up with protests in US cities demanding the lockdowns be lifted because the coronavirus is “just a flu”.

Yesterday, he came up with two ideas based on two medical findings: 1. UV light can inactivate the virus. 2: disinfectant can kill the coronavirus.

President Trump first wondered how we could take the UV light inside the body, the lungs and so on. Then he thought up the idea of injecting disinfectant. Drinking disinfectant is already a popular way of committing suicide. This happens in poorer societies that cannot afford expensive potions. Clearly, Trump, who has been everything but poor, has no idea. Doctors however reiterate that both these ideas would be laughably stupid had they not been dangerous. So bad was this, that Dettol actually had to put out a statement asking people to not listen to Trump.

The makers of Dettol have had to issue a press release saying you shouldn't inject its products into your veins pic.twitter.com/JTYtlhMJ7D

Do not listen to politicians when it comes to the coronavirus. Listen to medical professionals.

Speaking of idiots, the Tamil Nadu police have found a novel way to deal with lockdown violators not helping in breaking the novel coronavirus chain. The reason many of us want to get out in spite of the lockdown is that we do not think we can catch the infection.

The police in Tamil Nadu are making those who are out having fun face the coronavirus infection for real. In Tirupur, they put young men out on the street into an ambulance. The ambulance had a man in plastic overalls pretending to be a coronavirus patient. Hell broke loose inside the ambulance as the mortified youth scrambled to get out. They were eventually let out but after ensuring the learned lesson will remain with them forever.

Here’s the lesson from a lady officer: When you roam around, anyone can have the coronavirus and you may not know. The government and the police officials have been stressing on the importance of staying indoors. If at all you need to come out to buy essentials, please wear masks.

This is Chennai. Guys without mask were put inside an ambulance, which had a dummy Corona infected patient. They learnt the best lesson ???? pic.twitter.com/8ByZsqokMU

Today also marks the beginning of the Islamic holy month of Ramzan, our Word Of The Day. Or Ramadan/Ramadhan, which has its root in the Arabic 'ramida' or 'ar-ramad', which translate to 'scorching heat', 'dryness'. This is the time where the debate over Ramzan or Ramadan begins. The debate is needless. Ramzan/Ramadan is the name of the month, it precedes the advent of Islam. Arabs pronounce the letter zwad as /dw/ and Persians as /ze/. Urdu has Persian influence so we are used to the z sound and call it Ramzan. A lot of people in Europe pronounce the word “the” as “ze”. Remember, “Hurry up Tommy, before Zee Germans get here”? Or this.

Well, some pronounce z as we pronounce “the” in English. So the Persian ‘ze’ is Arabian ‘the’! Different strokes for different folks. The fasting is called Roza; if you asked an Arab to say it, they would say Roda/Rodha. This confusion doesn’t arise because the Arabic word for roza is Saum. Take the word namaz. The Arab will say namadh. Shukran li Allah, they don’t do it. It will sound funny to an Indian ear. They stick to the Arabic word for prayers: Salat.

So end the debate and pronounce it your own way. Urdu pronunciation or Arabic, the month is gonna be difficult. Mosques are shut. Markets are shuttered. The virus is among us. Let us hope the crisis gets over by Eid because a month of fasting deserves a feasting end.