Pad Women of Daula! Meet the women of a small Haryana hamlet who are bringing about a menstrual hygiene revolution

May 28 is World Menstrual Hygiene Day. In India, girls still drop out of school owing to unprotected periods. A group of village women in Daula, Haryana, decided to change that, by making and selling simple sanitary pads.

A group of women staying in Daula and Jhamwas villages in Haryana have decided to bring about a sanitary pad revolution. They were successful even with limited resources and started a campaign to change women’s thinking during the days they undergo menstruation.

To start off, the rural women put up a sanitary napkin manufacturing machine unit in Daula with the help of an NGO. In fact, this encouraged women to come forward from their homes and work for generating additional incomes for themselves — they call themselves the ‘pad women’!

They are part of the state government’s project of distributing pads to school girls as part of the menstrual hygiene scheme. The state scheme was launched in February 2014 in five districts of Haryana and has covered around 10 lakh girls. It was only in 2016 that this scheme reached their particular village. However, these women, who would, on a normal day work be in the fields or looking after the cows in their home, have come forward to break the taboo over menstruation.

Daula is also known as the former president Pranab Mukherjee’s village (as he has adopted it) and is situated in Sohna. This looks like any other village, but over here, six ‘pad women’ make pads using fiber, cloth and cotton and distribute them around nearby villages. Nisha Kumari, a worker at the unit, remarked: “This is a victory for us. Most of the women in the village use cloth still instead of sanitary napkins. So, we go to schools, colleges and give them these napkins. We firmly believe the women need to be told about our product. The women need to prioritise their own health. And these are much more hygienic than a normal cloth.”

In Haryana, girls during menstruation even have to skip school because they don’t have sanitary napkins. Om Prakash, principal of the Government School, Shivaji Nagar, said: “This is true that girls skip schools during this time. Their studies take a bad hit due to this — sometimes, they are forced to drop out.”

All for the lack of menstrual hygiene which is safe, simple and can be made affordable.

This is where these rural women come in — they are going from one school to the other, knocking at people’s homes to give them sanitary napkins.

Reena Singh, another worker at the unit, mentioned, “Our job is not limited to making the sanitary napkin pads but also to distributing them. We want kids to study and go to school, this is why we work on a war footing to ensure girls in and around Haryana have pads. Many of us see this as our duty to society.”

It was with this motive that Niswarth Kadam had initiated the ‘Aapki Sakhi Project’ for creating awareness on menstrual hygiene and distributing sanitary napkins to girl students of government schools. The centre was launched in October 2016 and had three women workers in the beginning. 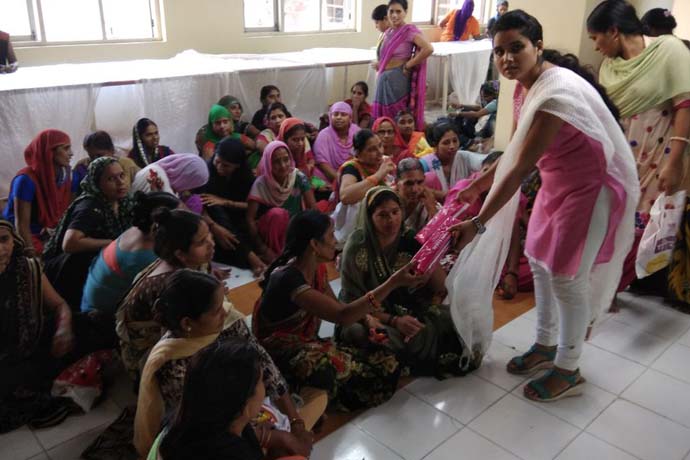 Daula women have been making and distributing sanitary napkins in govt schools since 2016. (Photo: Author)

Pramod Raghav who received the Haryana Gaurav award for his efforts on setting up a sanitary pad machine in the area, bought it and put it up in the village — only to face strong criticism. “See, initially the villagers called it a dirty job, which should not be done in Daula, but as we told them the importance of this machine and what sort of a revolution it will bring about, they gave us access. Now, when their own ladies get sanitary pads, everyone in the village is happy,” said Raghav.

The women's group has a target of manufacturing at least 600-800 pads daily which they sell for Rs 18 — much lower than any pads available in the market.

And the price of keeping girl students in school? Invaluable.

Also read: Period has won the Oscars. Why it’s time for companies making sanitary napkins to drop the shame around menstruation

Post your comment
#Sanitary napkin, #Pad women, #Menstrual Hygiene Day
The views and opinions expressed in this article are those of the authors and do not necessarily reflect the official policy or position of DailyO.in or the India Today Group. The writers are solely responsible for any claims arising out of the contents of this article.